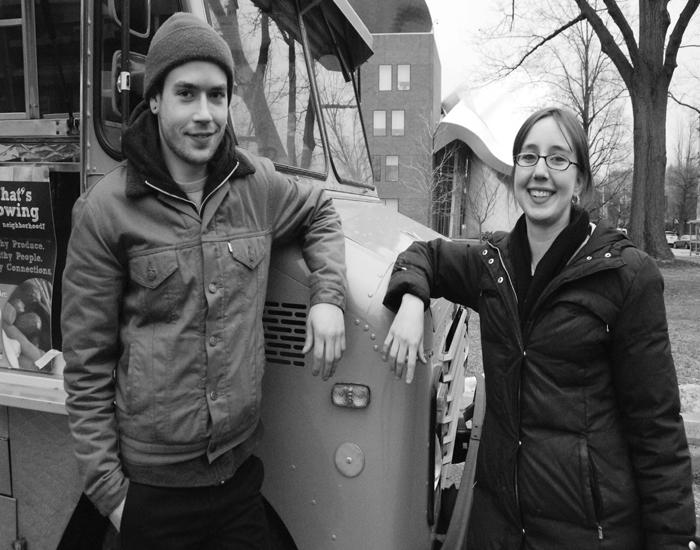 It’s not a big secret that college students are hungry.

Factor in the freshman 15 and the crummy food served up by campus cafeterias such as our own Leutner and Fribley, and you’ve got a recipe to wrangle one of the best customer bases in the U.S. to do your bidding. Sell food and they will come, even if “they” are the quintessential “poor” college student.

However, providing Asian-fusion dishes to those that happen to be wandering through the University Circle area, and more specifically the Cleveland Institute of Art’s parking lot, did not just appeal to Jae Stulock, one of the owners of Umami Moto, because it could be a potential cash-cow.

“It’s fun to serve food to the University Circle campuses. People are genuinely happy and excited to see you and usually very upbeat. It makes it an enjoyable time for us to be there,” says Stulock, whose food truck has been coming to the CIA parking lot for the past year, joining the likes of other popular local trucks such as Dim and Den Sum and stREAT Mobile Bistro.

Currently, Umami Moto occupies the parking lot accessible from Bellflower Rd. every Wednesday from 11 a.m. to 2 p.m. – giving students something to look forward to weekly, such as pad thai, massaman curry, or bahn mi sandwiches. “A lot of people approach new foods thinking, ‘Okay, I don’t know if I’m going to like this,’ but what we try to do with our menu is to emphasize the familiar elements of the dish to our customers so that they also try the exciting flavors of our dishes as well.” Vietnamese and Thai flavors are most often synergized in Umami Moto’s dishes, but they have made a variety of foods depending on their crowd for events in Cleveland and Canton.

The face of co-owner Sandy Madachik will normally greet anyone that approaches the truck window to place their order, which will generally cost you between $3.50 and $11. However, Stulock and Madachik have been exceptionally busy lately as they prepare to open another location, this time a stationary restaurant in the Agora Theater complex near E. 55th and Euclid Ave., in the beginning of February.

“Honestly, we wanted to start a restaurant. It was a long-term plan for us, but it all fell into place when the developers at Midtown showed us the space and all of the renovations being done to the building. We got quickly involved with the Agora renovation and being a part of it,” says Madachik.

Umami Moto first put gas in their tank in November of 2010, and a little over two years later they are ready to open The Hipp, a cafeteria-style yet up-scale restaurant catering to a lunch crowd. The restaurant’s name was inspired by one of the early monikers that the Agora building took on after it was built. But don’t think this history is the only reason for the name; Stulock says “We really want people to believe that this is the place to be every time they come here.”

The Hipp will be a departure from what can be found on the Umami Moto truck; however, the restaurant will feature a contemporary menu with flavors that may be slightly foreign but reassuringly familiar to those eating there. Middle Eastern staples, deviations on Moroccan dishes, and some Asian influences will have a place on their menu, which will change seasonally with specials to debut each week. Stulock’s fusion-inspired menus are meant to encourage traditionally American eaters to try something new.

“We’d really like to become a destination,” Stulock says of The Hipp and its staff. “And it’s not in order to be the cool kid. When I was younger our house was the house to hang out at, watch football… I want to feel like our restaurant is performing on that level. It should be a place that people come and really enjoy themselves.”