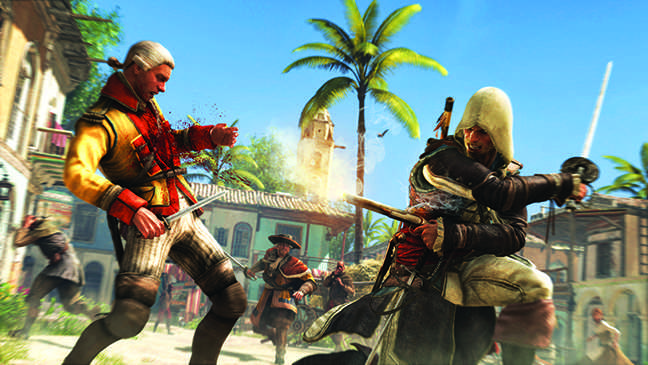 When “Assassin’s Creed III” came out last year, regardless of the overall opinion of reviewers, many agreed that the sailing was an amazing part of the game. Taking those lessons to heart, Ubisoft has successfully made not only an excellent addition to the franchise, but a great game overall.

“Assassin’s Creed IV: Black Flag,” ironically the sixth game in the series, is a mixture of the “Assassin’s Creed” universe with famed pirates of the Golden Age of Piracy in the mid-1700s. While adding in pirates might seem to be a way to cash in on their post-“Pirates of the Caribbean” pop culture popularity, pirates in this game are a bit more realistic and family-unfriendly than Disney’s incarnation. Blackbeard, for instance, has a rather intense scene early on in the game where he is holding some people hostage and threatening them in front of the town of Charleston in a way that not even Barbossa would even dream of doing.

The main campaign follows the adventures of Edward Kenway, Welsh pirate and grandfather of the “Assassin’s Creed III” protagonist. Kenway, unlike previous protagonists of the series, is a pirate first and an Assassin second. He only becomes involved with the Assassins and Templars and their eternal secret war when he encounters an Assassin, kills him and assumes his identity long enough to learn of a great treasure being sought by both shadow organizations, which he plans on retrieving first and selling to the highest bidder.

The treasure in question is the “Observatory,” yet another piece of technology from the precursor race of “Assassin’s Creed.” The main campaign revolves around Kenway’s hunt for this treasure, encountering pirates, governments, Assassins and Templars alike on his journey. A journey that is guided by the player, a new research assistant at Abstergo Entertainment.

Like previous installments in the series, “Assassin’s Creed IV” also features a present-day aspect. Having completed the story of Desmond Miles in “Assassin’s Creed III”, players no longer assume his role, but that of an unnamed employee at Abstergo, the modern front for the Templars, whose job it is to perform genetic memory research and relive Desmond’s genetic memories of Kenway for historical research. While some have complained about Desmond’s sections in previous titles, the present-day sections in this game are quite shorter, with only five required missions interrupting Kenway’s adventures. However, interested fans of the series will find plenty of anecdotal, cryptic data about the “Assassin’s Creed” universe by searching through Abstergo’s offices in the present-day.

Kenway, particularly when compared to his grandson, is an excellent new face in the series. While not quite the smooth-talking, lovable Ezio Auditore da Firenze of “Assassin’s Creed II,” he does have some charm, and is certainly one of the best protagonists of the year. Kenway’s supporting cast of pirates, including the Edward “Blackbeard” Thatch, Calico Jack, Charles Vane and Anne Bonny, while not as likeable of pirates as Jack Sparrow, are rather interesting and funny characters at times.

The gameplay of “Assassin’s Creed IV” consists of two parts: the traditional free-running, climbing, stealth and combat of previous titles in the series and sailing Kenway’s ship, the Jackdaw, freely throughout the West Indies. The game’s world is enormous in scope. More than half a dozen large land masses exist to explore on foot, from large, bustling ports to ancient Native American jungle ruins where players can hunt animals, claim assassination contracts and chase down collectibles. These exist within a larger, oceanic map of the West Indies with dozens of additional, smaller ports, coves and islands and vast stretches of open sea populated by Spanish and British ships.

While prowling around the West Indies, any ship encountered is a potential target for piracy, carrying goods which can be sold or used to upgrade the Jackdaw. Naval battles require strategy in approaching attacking targets, as the ship can be quickly surrounded by a fleet of faster vessels, and furling up the sails to maneuver more precisely may leave the Jackdaw vulnerable to enemy mortar fire. However, when pulled off correctly, crippling a man-o’-war, reeling it in and storming the ship can be very satisfying. Captured enemy ships can be used to repair the Jackdaw, lower Kenway’s notoriety level or be pressed into service for his fleet, an “Assassin’s Creed Brotherhood”-esque minigame that allows Kenway to send vessels out to complete missions in other parts of the world.

The best part about the game is undoubtedly the sailing—no automatic money generation exists within the game, so Kenway must sail out and plunder ships to earn money and supplies for the rather expensive ship upgrades. In addition, cruising on the fastest speed setting will turn off the game’s UI and zoom the camera out to show the whole ship, making for a pleasant cruise across the Caribbean. Your crewmen can also sing over 30 unlockable sea shanties, adding to the atmosphere of the early 1700s and making you truly feel like the captain of the ship.

The land sections, however, are where the game lets itself down a little. Most land missions involve tailing and eavesdropping on someone. While the stealth, running, jumping and free-running are all solid mechanically, simultaneously forbidding detection and forcing the player to move quickly to keep up can be irritating after having to repeat a section several times. This can get very repetitive, but can be fun, notably when tailing guards through the crocodile-infested swamps around Charleston. Land combat, unlike naval combat, is the same system that has been used throughout the series: counter, kill, repeat, with generous timing allowed and no difficulty setting. However, enemies do tend to deal significantly more damage than previous enemies in the series, so though it may be harder to mess up, it will be penalized.

Overall, “Assassin’s Creed IV” is a great addition to the series and one of the best games of the year. Sailing across the open world of this game is always an enjoyable experience, from the mere act of moving from place to place to the fun and challenging naval combat. Kenway is an entertaining, funny and clever character, and while the activities on land can get a bit monotonous and uninteresting, Kenway, the colorful cast of pirates and the Jackdaw easily make up for this.

“Assassin’s Creed IV” for the PC earns a 9 out of 10—while not quite a perfect game, it is easily worth the price and is a fun play.