Author Susan Cain speaks at convocation about the power of introverts 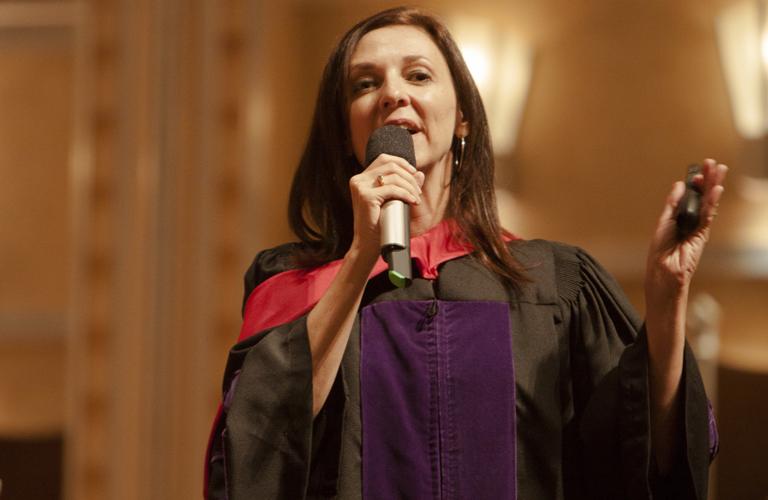 Susan Cain, author of this year’s common reading book Quiet: The Power of Introverts in a World That Can’t Stop Talking, makes the keynote address at this years convocation. She emphasized different ways to better work with introverts.

Mahatma Gandhi, Eleanor Roosevelt and Warren Buffet have at least two things in common. Not only are they individuals who have positively revolutionized society, but they are also introverts.

On Aug. 28, Susan Cain, author of the university’s common reading book “Quiet: The Power of Introverts in a World That Can’t Stop Talking,” spoke about introverts and the need for their talents in society at Fall Convocation in Severance Hall.

A Princeton graduate and Harvard Law School educated author, Susan Cain has represented huge clients, such as General Electric, during her seven years practicing corporate law. As time passed, however, Cain realized she was not being true to herself because, as an introvert, she spent her time doing extroverted work. Consequently, she decided to become a writer, her true passion, and research more about personalities.

The result was her “New York Times” bestselling book. In Quiet, Cain discusses the importance of having introverts contribute their talents to society since they make up one-third to one-half of every workplace and classroom.

Cain has noted that introverts can be overlooked because society rewards those who are social and outgoing. In her book, she describes how businesses will often promote energetic, bubbly individuals over their quieter counterparts.

When talking about ‘Create’, Cain argued that schools and businesses often utilize ‘groupthink,’ or the idea that creative ideas come when many people collaborate together; however, evidence suggests that creative ideas usually come from solitude and deep thinking. Cain gave an example of J.K. Rowling, who thought about the idea for Harry Potter on a train in privacy and then spent a few more years developing the idea.

In discussing ‘Lead,’ Cain noted a scientific study that observed the chief executive officers of the most innovative and profitable companies. The two characteristics they noted were that the CEOs of all these companies were extremely dedicated and passionate about their work, and that they were all very thoughtful, meek and appreciated less stimulation.

In ‘Connect,’ Cain gave suggestions and tips to both introverts and extroverts on how they can become happier and work better together. For introverts, Cain said it is okay to eat alone sometimes and have time to yourself to process ideas. And for extroverts, she suggested giving introverts time to think, and not being offended if introverts were sometimes quiet towards them.

In her speech, Cain did not discount extroverts.

“We need the talents of the bold and the gregarious,” said Cain.

Sophomore Leah Castelaz said, “As an extrovert, I was really interested in Cain’s speech. It gave me great insight, and will definitely change how I work with other individuals and introverts.”

“Being an introvert myself, I never really thought about some of the ideas she mentioned, but when she did I could easily relate,” Gallo said.
Convocation at Case Western Reserve University is a formal ceremony that kick-starts every new academic year. At this year’s event, in addition to Cain’s talk, University President Barbara Snyder recognized Stanton L. Gerson M.D., Maxwell J. Mehlman J.D. and Dr. Robert F. Savinell as Distinguished University Professors for their impressive work and contributions to campus. Gallo and Board of Trustee chairman Chuck Fowler also gave remarks about the progress CWRU has made in the past few years.