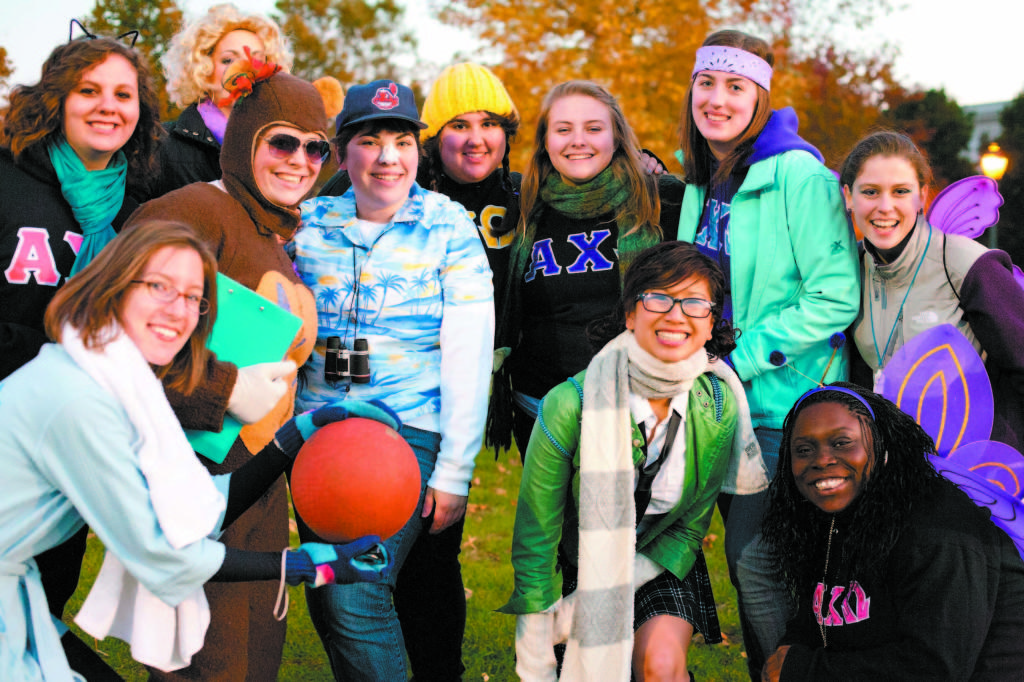 Coinciding with domestic violence awareness month, CWRU’s AXO sorority hosted a series of events from Oct. 25 to Oct. 30. With co-sponsorships from the Flora Stone Mather Center for Women, Residential Housing Association, and Undergraduate Student Government, the sorority sought to both disseminate information about the subject and raise funds for the Domestic Violence Center of Greater Cleveland.

“It’s vital we pass this information on to college students. Just based on the crime log, there is domestic violence that occurs on this campus,” explained AXO president Candace Martin. “This age group is one of the highest impacted by domestic violence. College age women, especially, are very likely to experience domestic violence and people don’t know that. Events like this raise awareness and offer support.”

Events throughout the week included purple day on Oct, 26, a hidden voices ceremony on Oct. 27 and a kickball tournament last Friday Oct. 29. Among these, AXO domestic violence awareness week co-chair Elizabeth Kannard singled out purple day, in which CWRU community members donned purple garb to show their support for both victims and survivors of domestic violence, as the most powerful event.

“It’s really nice to see all the people out there supporting it. It’s not just women, its not just people who have gone through it. Everyone wants to support it. and that’s why it’s the most powerful day.

Martin agreed with Kannard, also considering purple day to be pivotal in raising awareness of domestic violence issues. “You can’t really ignore one huge part of the campus wearing purple,” she said.

For Martin, ceremony was especially important. “It shows that domestic violence knows no limits. It’s not based on your ethnicity or your class or you gender. It can be same sex couples, it can be boyfriend girlfriend, it can be a parent, It can be a lot of different things. I think people sometimes think it’s just boyfriend/girlfriend husband/wife, but it can be a lot of things it can be anyone.”

In addition to participating in purple day and the hidden voices ceremony, 18 different student groups also opted to compete in AXO’s kickball tournament to help the sorority raise funds.

AXO sorority sister Victoria Rusnak, was impressed with campus participation in the event. ”It was a lot of teams, especially for Halloween weekend when there’s a lot of people busy with different events,” she said. Rusnak also singled out the Delta Chi fraternity, who bested the field of 18 teams to take the top prize, as particularly deserving of praise. “I was really impressed with their involvement in the tournament this year, just because just a month ago they started to form their colony. So I personally thank them. I was impressed.”

The proceeds from the kickball tournament registration combined with donated funds from totaled approximately 1500 dollars. Libby Kanard explained that as domestic violence awareness is one of the largest parts of AXO’s philanthropy nationally, that such sums add up across all of the different chapters. “That does make a difference,” she said.

“I, personally, am a survivor of domestic violence. It’s really powerful to me when I see others in our community who haven’t experienced it supporting [our cause].”