PTG covers complete works of Shakespeare in one show 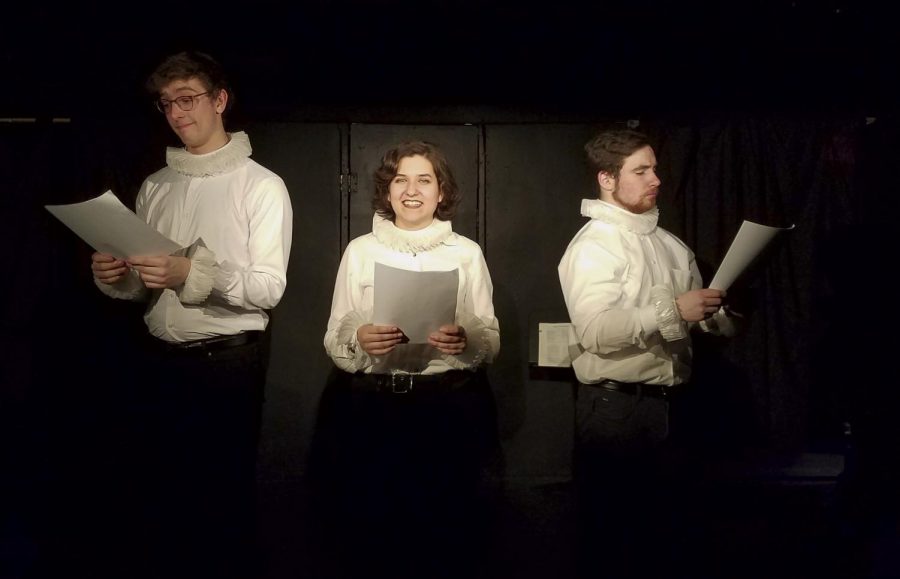 As a high school student, perhaps the two worst words to hear from an English teacher are “William Shakespeare.” The name itself strikes dread and fear into the hearts of teenagers, leading to groans when it is time for an annual reading of one of the playwright’s many scripts. Hearing that the Players’ Theatre Group will be presenting the complete works of the author in one play, one might want to do the Birdbox challenge instead of watching all 37 shows in a row.

Luckily, “The Complete Works of William Shakespeare (abridged) [revised],” showing tonight and tomorrow night in the Eldred Black Box Theater, does not last days or even hours; it is presented in a tight 97 minutes.

Director and third-year chemical engineering student Andy Ogrinc explained that he wanted the show to lessen the fear people have of reading and experiencing the Bard of Avon on stage.

“I hope people leave the show [thinking], ‘Shakespeare is actually very accessible or more accessible than I thought,’” he said. “I would love it if we got some new Shakespeare converts from the show.”

The high energy show attempts to summarize or depict all of the plays in one production with just three actors. Second-year mathematics student Nathan Waniorek, second-year theater and marketing student Ashlen Trapalis and fourth-year chemical engineering student Alex Gordon (in his first scripted CWRU show) portray alternative versions of themselves trying to play as many different characters in Shakespeare’s plays as possible.

The fourth wall does not exist in the play, and the actors interact directly with the audience throughout the duration of the production. To start the show, Gordon brings his fellow actors on stage, introducing Trapalis as a “pre-eminent Shakespearean scholar” with a certificate from the internet and Waniorek as a clueless actor caught up in the program.

The production opens with Shakespeare’s most famous play, “Romeo and Juliet,” and covers the basics of the plot. The rest of the first act proceeds to cover all but two of Shakespeare’s plays, “Coriolanus” (which is skipped) and “Hamlet.”

The comedies are condensed into one short, convoluted plot—they all follow the same structure anyway—while plays like “Titus Andronicus” (cooking show) and “Othello” (“Hamilton”-style rap) are in unorthodox formats. Many of the histories are condensed into a football game, complete with play-by-play announcing and the theme music from “Monday Night Football.”

With a production covering this many plays in a short amount of time, countless costume changes and props are needed to ensure the audience has some semblance of the current scene.

“This is something that has been a very predictable challenge, but a very large one, regardless,” third-year biomedical engineering student and props master Jess Dickson said. “Yes, we know what we’re getting into and then it was just a lot of work. People have been putting in that work really well.”

Of course with so many costume changes, a few won’t get executed to perfection. That fact, combined with a low production cost and a Black Box location, makes it hard not to get Monty Python vibes from the production.

However, the disorganization is part of the aesthetic. A Monty Python-style of humor is present in the show as well, with the troupe making pop culture and CWRU-specific references, complaining about certain aspects of the production to the audience and at times feigning that they have no idea what they are doing.

While all three actors portray this frantic energy throughout the performance, it can perhaps best be seen in Waniorek and Trapilas’s performances. Trapilas appears correctly frazzled by her character’s lack of Shakespeare knowledge, despite her “expert” status.

Waniorek uses his body language and line delivery to convey how reluctant of an actor his character is in this performance. The character is so believable that his second act redemption feels completely earned.

Gordon shines more when he plays the straight man, doing his best work when reacting to the zaniness around him. Even when he is off to the side, narrating a scene or not involved at all, his facial expressions to the audience cue them into the eccentricity of the situation at hand.

All three actors deserve credit for attempting to portray more characters than they have ever done before. Waniorek calculated that he plays more roles in this production than in all of his previous ones combined.

Of course, in reality, they are just playing one character (an approximate version of themselves) trying to play as many characters as possible. But technicalities like that don’t stop the production from listing all of the individual roles played by the troupe in the program.

“It’s really just me being all of those different characters,” said Gordon. “It’s a more concentrated version of [IMPROVment], which I really, really like.”

Overall, the production strikes a good balance between lampooning the works of Shakespeare and still giving them reverence. While some of the gags come at a quick pace, it is easy to keep up, especially for those familiar with the Bard’s work. The production does spend time, particularly in the second act, celebrating the complexities of Shakespeare’s characters and showcasing the greatness of some of Shakespeare’s finer workings.

Ogrinc believes that audience members need no prior knowledge of Shakespeare to enjoy the show. There’s no need to download any SparkNotes and read No Fear Shakespeare before the show to get any of the jokes.

Instead, let the author’s name strike humor in your heart.

PTG presents “The Complete Works of William Shakespeare (abridged) [revised]” tonight and tomorrow night at 7 p.m. in the Eldred Black Box Theater. Tickets are free but donations are welcome.