Banerjee: Save democracy, then let our government govern

It is time to end the filibuster. 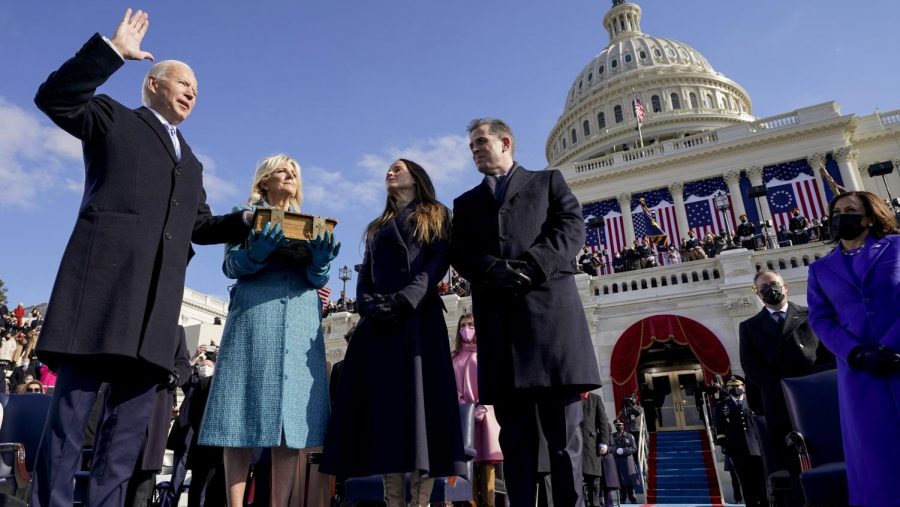 President Joe Biden promises to unify the country, though his legislation may be challenged by bureaucracy such as the filibuster.

Well, it’s finally happened. Ten years after the disastrous 2010 midterm elections, the Democratic Party is in control of both houses of Congress and the White House after electing President Joe Biden, retaining a majority in the House of Representatives and sweeping both Georgia runoff Senate elections earlier this month. Yet, in spite of our country being in the most dire straits imaginable, with millions unemployed, a pandemic killing thousands every day, a broken immigration system, unaffordable healthcare and record levels of income inequality, we still can’t count on our government to actually take action to resolve any crisis. That is to say, we can’t count on them to actually govern.

After four years of the most disastrous presidency in modern history, Biden recognizes that he is tasked with an “FDR-size presidency” to confront our many challenges. The week before Biden assumed office included the introduction of a massive $1.9 trillion stimulus plan to disseminate $1,400 stimulus checks to every American, increase the minimum wage to $15 an hour and distribute billions of dollars towards a universal vaccination and testing program, along with other measures that could cut child poverty in half and substantially reduce homelessness.

All of these actions sound unequivocally promising and highlight the prior failures in federal leadership through this pandemic. Many of these initiatives should have been implemented months ago, like setting up vaccination sites across the nation, creating a public education campaign about the vaccine and funding public schools and state and local governments. The previous administration’s incompetency and failure to coordinate a federal campaign has hampered greater success, with everything being dumped on local and state governments, making things far worse now than it ever needed to be.

Despite the dire emergencies that face us, this “American Rescue Plan” is unlikely to pass through Congress as currently framed, despite Democrats controlling both houses.  Outdated congressional rules have essentially made the Senate a legislative graveyard, stopping our government from governing.

To preface this, it is important to understand that the Senate was initially intended by our Founding Fathers to be a “cooling saucer” for more partisan and sometimes outlandish House legislation. As a result, rules like the filibuster were introduced, making it effectively impossible for any legislation to pass without 60 votes to end deliberation, theoretically allowing debate before a bill is passed. However, the filibuster has become weaponized for years to essentially make any major legislation require more votes than the simple majority of 51. As such, even with Vice President Kamala Harris’ tie-breaking vote granting Democrats the majority, any hope for lasting change is essentially non-existent as long as the filibuster remains.

In the 20th century, the filibuster was used sparingly, but most often to delay civil rights legislation, such as when Sen. Strom Thurmond spoke for over 24 hours in 1957 to prevent the passage of the Civil Rights Act. I say ‘delay’ instead of ‘obstruct’ because after 1970, new Senate rules effectively allowed filibusters to go on forever without senators actually having to speak and debate. The end of the talking filibuster coincided with its use to completely decimate legislation.  Between 1917 and 1970, senators filed fewer than 60 motions to break a filibuster while between 2009 and 2015, they filed more than 500. The filibuster has essentially become a way for the minority power to kill any legislation with which they don’t agree.

The filibuster did not inhibit the first two years of the Obama administration because Democrats had a 60-seat majority in the Senate, allowing them to pass the Recovery Act and the Affordable Care Act. However, even with a 10-seat cushion, the size and scope of those policies had to be limited in order to ensure votes from the most conservative members of the party, or risk a never-ending filibuster. The successive administration didn’t have any legislative victories other than the confirmation of three Supreme Court justices, as the Republican Party was willing to void the filibuster in those confirmation processes. All other lawmaking from Congress, such as the 2018 tax cuts, were only successful due to budget reconciliation.

Budget reconciliation is a process where legislation that primarily concerns taxes and budgeting can be passed with a simple majority. A lot of President Biden’s agenda can be accomplished this way—from tax increases on the wealthy, Medicare expansions, expanding Section 8 housing, $2,000 checks, substantial infrastructure spending and increased investment in clean energy. Needless to say, Democrats controlling this process will still be extremely helpful for millions of Americans, but budget reconciliation has limitations, namely the Byrd Rule that limits the amount that can be spent. And of course, reconciliation will not realize a $15 minimum wage, real immigration reform, statehood for Washington D.C. and Puerto Rico or real democracy reforms.

But why is the filibuster there in the first place? If a party has been granted all three levers of power from the people via elections, shouldn’t they be able to use it? Well, some argue this would lead to a “tyranny of the majority” that could trample the minority party’s wishes and strip away their protections. I mean, I am grateful that in the two years the Republican Party held full control of the legislative process they didn’t radically change the country in their direction. But on the other hand, shouldn’t the will of the voters be reflected in the legislation being passed? If voters wanted legislative gridlock, perhaps the electorate would’ve voted for a divided government rather than giving one party full control.

Ultimately, the winners of a free and fair election should be able to roll out their agenda and actually make laws that voters requested. If voters end up disliking those laws, then politicians are voted out and the other party inevitably gains control, such as what has happened in the last four years. By taking roadblocks away from governing, lawmakers will actually make laws and take votes on things that actually matter.

It’s no secret that our nation is deeply polarized, with political identity becoming integrated with cultural and regional identity more and more each year. Our politicians know they can’t effectively make or vote on laws, so instead, they rile up their bases in culture wars and division in order to keep winning elections.

If our lawmakers were actually legislating and deliberating—knowing that their votes have actual effects, for good and bad—our Congress would become an effective governing body rather than the facsimile it is today.

Unless laws are actually passed and people see the government’s impacts on their lives directly, politics will only become more and more of a spectator sport where people support their local teams rather than the policies that would actually be in their self-interest.

The only glitch in this theory is that the voice of the people actually needs to be heard through free and fair elections for this all to work.

Unfortunately, that is not the case today.

For the bastion of democracy America claims to be, we are profoundly undemocratic. Gerrymandered districts ensure that some parties are unfairly favored over others; with no real fear of competition, extremists gain footholds in the House of Representatives.

The Senate and the Electoral College are both much more Republican-leaning than the country as a whole, giving them an inherent advantage due to geographic distribution. This discrepancy, along with the bevy of voting disenfranchisement against minorities that intends to counter shifting demographics, suppresses the true voice of the people. Bolstered by the gutting of the Voting Rights Act of 1965 by the Supreme Court in 2013, these initiatives all seek to maintain white rule and make it increasingly difficult to unseat the incumbent party in power, especially the Republican Party.

Fortunately, there are ways to counter this and ensure proper representation in our government, but it requires ending the filibuster as it is today.

Since Democrats retook control of the House in 2018, a major focus of their agenda has been ensuring democracy for all Americans with bills such as H.R. 1. This bill reforms campaign finance, strengthens government’s ethics laws and expands voting rights by establishing easier voter registration, ending voter purges, strengthening mail-in voting and ending gerrymandering through nonpartisan redistricting commissions, banning corporations from donating to political campaigns and expanding campaign finance disclosures.

All in all, H.R. 1 would strengthen our democracy and make sure that voting is as easy as possible, ensuring that everyone has a voice. In conjunction with the reintroduction of the new voting rights act named after the late civil rights activist and congressman John Lewis, H.R. 1 would go a long way in ensuring the electoral makeup of this country is reflected in our elected representatives. So, of course, Republicans are calling the bill a “power grab”.

The Republican Party has not won the popular vote in a presidential election in 7 of the last 8 elections, and that won’t change as long as they stick to their white plight agenda. They intentionally neglect substantial platforms in favor of subverting democracy and maintaining the status quo.

The most blatant example of this is the misinformation about the 2020 presidential election results that led to the storming of the Capitol, with an incumbent president trying to directly ignore the will of the people. Meanwhile, Republicans, for years, have been weakening the voices of those predisposed to oppose them. Voter ID laws, weakening of mail-in systems and voter purges are common practices in Republican-led states, targeting communities of color and us, college students.

As our generation becomes more politically engaged, Republicans have put strict restrictions intended to make voting as students as difficult as possible, from closing polling places near campuses, to making absentee voting as inconvenient as possible and preventing student identification cards from being used, all in the name of preventing voter fraud that doesn’t exist. In essence, our vote is being suppressed and our voices aren’t being heard through the electoral process because one party does not believe in democracy anymore.

The recent election could change all of this—if the Democrats want to. Senate rules can change with only a simple majority vote. If all Democrats were united in ending the filibuster and then passing democracy-saving legislation and rebalancing the Senate by adding new states, they could do it. It’s not a matter of power, it’s a matter of will.

Once our democracy is ensured, proper governance and electoral responses can come, but neither are possible with the filibuster.

Even reforming the filibuster to bring back talking filibusters, or making more exceptions to the rules could make a great impact. For instance, who’s to say that in a national emergency like COVID-19, that related legislation shouldn’t be able to bypass the “normal deliberative processes,” or that granting statehood isn’t really a legislative process, so it shouldn’t really be subject to a debate?

We can either have democracy or the filibuster, we can’t have both.

Democrats must take dramatic action with their new power and truly ensure democracy for all so we can have effective governance for generations to come. Once our systems are fair and secure, let governments pass laws and actually govern. If we can ensure that politicians properly face consequences from voters for unpopular policies, then they should be allowed to carry out their agendas as they see fit.

Ensuring that the voice of the people is heard is necessary, and once that is in place, we must orient our Congress from just taxing and spending votes towards the actual issues. This can only be a positive change for both the legislative process and the health of our society as a whole.

Biden stated in his inaugural address that “Democracy has prevailed.” Well now is the time to protect it.

America can be saved—Democrats need only be bold enough to reach out and make it happen.