Barrels of fun… at Rubblebucket 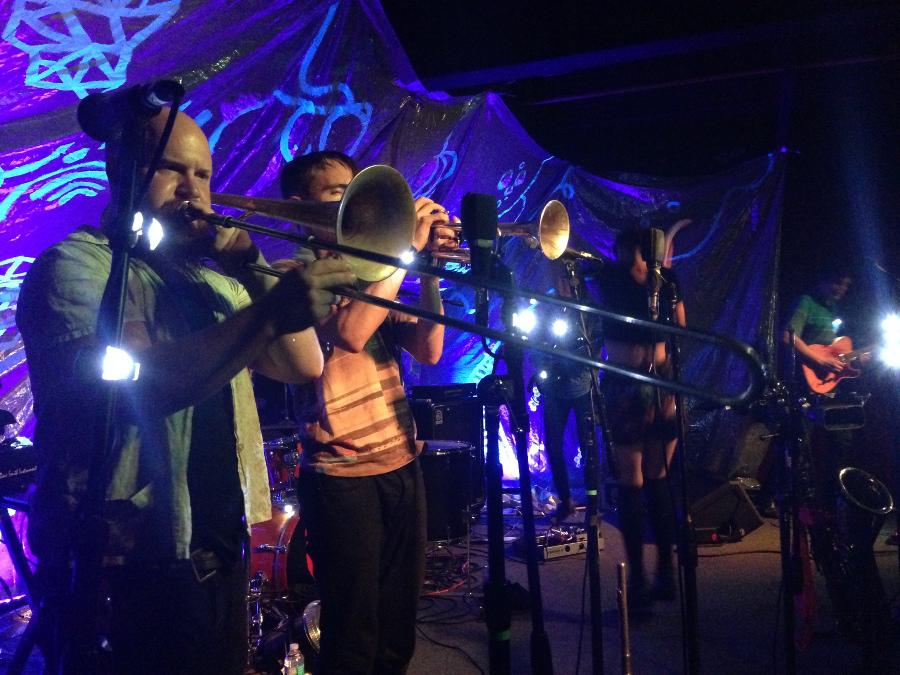 As many new students unpacked on Thursday, Aug. 21, I was experiencing the best indie rock Cleveland has to offer at the Grog Shop.

Opening band Village Bicycle played to what was at first a rather sparse crowd. The band hails from Cleveland and is led by the small and cheerful Liz Kelly, who has a voice to be reckoned with. Heaving bass by Ty Craemer and keys and drums by Karah Vance and Debbie Randazzo follow her vocals.

This three-girls-and-a-guy band was very diverse in sound and their music alternated from 90’s punk, to pop, to rock, to alternative, to screaming. Though it kept the music fresh, the band did not have a clear style.

Next was the psychedelic band, Kitschy. This sextet of guys played peaceful, mellow music that emitted good vibes all around. Their instrumental talent was a blessing to all as they jammed away. The band had several long, hypnotic guitar solos with incredibly effective use of reverb. The music never ended, and instead constantly had a new beginning.

Kitschy brought a sizable audience, and it was hard not to rock out to their tunes. As I panned the audience, everyone was dancing and having a good time, which set the stage for the headliner, Rubblebucket.

Alex Toth (bandleader and trumpet) and Kalmia Traver met at University of Vermont where they were both music majors. The two moved to Brooklyn, New York, where they would go on to form Rubblebucket. I was lucky enough to see them last summer at the Grog Shop and was ecstatic to see what new songs they had to share to eager listeners.

As the lights turned on, the large band took the stage followed by a small girl with a black-brimmed hat that reminded me of Heisenberg from Breaking Bad. In seconds, the space was filled with loud instrumentals and powerful vocals from the petite Traver.

The audience immediately came to life with clapping, dancing, jumping and foot stomping. Traver shared with the audience that this was their first performance on their new album tour. Needless to say, the audience cheered.

Another first was the use of a flute in their songs. The brass and flute accompaniment was a fantastic addition and drove the beat as the musicians danced in unison as they played.

Towards the end of the show, band members brought a tarp out to the audience who held it up high as Traver sang and danced under the tarp with other dancers.

Rubblebucket closed their set with their signature song, “Came Out of a Lady,” which involved plenty of singing and dancing from everyone in the room. The brass section and Traver on the saxophone then paraded out into the audience and toured around the Grog Shop while still jamming.

This was by far one of the most fun and lively shows I have been to at the Grog Shop, and Rubblebucket knew how to put on a high-energy and dance-y show.