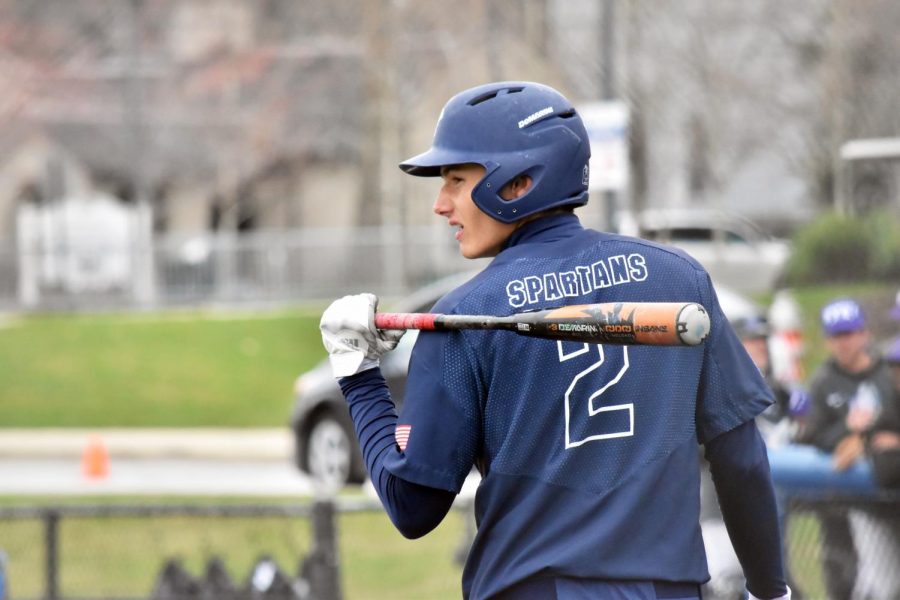 The No. 12 Case Western Reserve University baseball team split a four-game series at Washington University in St. Louis (WashU) to clinch a share of the University Athletic Association (UAA) championship. They can claim sole ownership of the position, as long as Emory University does not sweep New York University this weekend.  With conference play complete for the Spartans, they finished with a record of 12-4 in UAA play and 25-7 overall.

The road to the title was not easy for the Spartans. They kicked off with a slow start on Friday, April 20, dropping the game 6-1. The Spartans’ only run came off a base hit by fourth-year designated hitter Alex Capetillo in the top of the first inning. Third-year starting pitcher Mark Gross managed to hold the Bears off until the fourth inning, where he allowed four runs. The Bears then tacked on one additional run in each of the two following innings.

The next game in the series was much tighter than the Friday game. In the bottom of the first inning, WashU got off to an early 1-0 lead, but fourth-year starting pitcher Ben Murphy locked in and retired 11 straight batters. The score remained at 1-0 until the top of the sixth inning, when the Spartans put three runs on the board.  With the bases loaded and nobody out, Capetillo hit a RBI single to score first-year shortstop Jacob Lott.

“We were able to pick up on some tendencies which allowed us to expect certain pitches and capitalize when we got something to hit,” Capetillo said.

The next two runs were scored on a RBI groundout and a sacrifice fly. Leading 3-1 going into the eighth inning, the Spartans proceeded to allow three runs in the final two innings of the game, as the Bears won in walk-off fashion with a final score of 4-3.

After falling behind 2-0 in the series, CWRU stepped up its game and came out with energy in the third game of the series. On the defensive end, first-year starting pitcher Matt Levine pitched six scoreless innings, and the entire Spartan pitching staff allowed only a single run during the game. Offensively, the bats came alive. Early on in the game, the Spartans established that they meant business. They tacked on two runs in the second inning, and in the third inning, with the bases loaded and two outs, fourth-year outfielder Nate Glasser hit a bases-clearing double to drive in three runs. Third-year third baseman Jacob Kucia then brought Glasser in with a RBI base-hit.

“We knew that [Washington University in St. Louis] has some of the best pitching in the UAA, so we were really diligent about driving balls to the middle of the field and the other way for power,” Capetillo said.

In the top of the eighth inning, Capetillo contributed a RBI single of his own.

“Hitting in the heart of the order comes with a lot of pitches away and out of the zone, so being able to hit the ball up the middle and the opposite way makes it difficult for pitchers to get me out,” Capetillo said.

A double by third-year catcher Tyler Wypiszenski in the same inning put the last two Spartan runs on the board to complete the 9-1 victory.

One victory away from clinching the conference title, CWRU brought its ‘A’ game. The team went ahead early on a RBI base-hit by third-year second baseman Rocco Maue and never looked back. They scored another run in the third inning, and two more in the ninth inning.

On the mound for the Spartans, second-year starting pitcher Casey McConihe threw five scoreless innings. In several of his innings of work, McConihe worked his way out of trouble, forcing the Bears to leave runners on base.

“After giving up a couple of hits, I was able to trust myself to make a good pitch to the next batter and let my defense take care of the rest,” said McConihe. “We’ve been able to do that all year long, and it’s a big reason we have been successful up to this point.”

Second-year relief pitcher Scott Kutschke held WashU scoreless for the remaining four innings in the game to wrap-up UAA play for CWRU with a 4-0 victory.

Capetillo summed up the team’s thoughts on the series eloquently.

“Winning the UAA was one of our goals when we started the season,” he said. “We know that we play in one of the hardest conferences in the country, so to be the best is something we’re proud of. This is also the [fourth-year players’] first time winning the UAA, so going out on top is a great feeling.”

Following a 11-6 loss against No. 2 Wooster College, the team will look to end out the 2018 season and get ready for a World Series run with a matchup against No. 20 Marietta College on Sunday, April 29.