Baseball in full spring to the finish 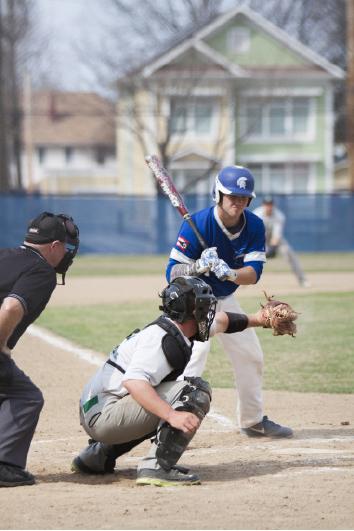 Zach Tobias watches a pitch get called a ball in a game earlier in the season.

The Spartan baseball team needs to be running at 110 percent for the next two weeks and they know it.

The Spartans have continued to perform at an outstanding level winning four of their past five games. Case Western has been squeezing in a packed schedule of games, playing nine games in the week of April 22. Since the Observer last went to print the Spartans overpowered nearby Oberlin winning both games of a double on Oberlin’s turf, split a pair at Alleghany and then edged past Heidelberg here at home.

The loaded schedule comes following the horrible weather that persisted in Cleveland through much of the beginning of the season. Each and every game is vitally important for the Spartans as each one enhances their chances of at an NCAA post-season play invitation. Due to this the Spartans will be looking to their extremely talented bench to assist their all-star starting line-up in winning these last set of games.

Back on Thursday, April 17, the Spartans had another offensive explosion, leading to a sweep of Oberlin. In the top half of the double header the Spartans knocked in at least a run in five straight innings, knocking in two in the second, three in the third and the a sole run in the fourth and fifth before exploding for an eight run top of the sixth. The Spartans managed their 15 runs off of 18 hits with eight of the Spartan starting nine recording RBIs. The team was led offensively by shortstop Andrew Frey, who had five hits in six at bats with three RBIs. He offensive prowess continued over into the second game of the day but his standout performance in the first game sealed a second UAA Hitter of the week award for him this month. John Fortunato, the Spartan ace marked up his sixth win putting in five solid innings of work giving up only four hits and fanning two.

The Spartans followed their 15 run opening with a solid 9-7 win in second game. The Case team found itself down 5-3 after six innings before exploding for a six run seventh inning. Frey added another three hits in five at bats. Frey had the only two extra base hits for the Spartans finding himself once on second and once on third. The Spartans took advantage of Oberlin’s four errors in order to score their nine runs on only seven hits, while Oberlin managed their seven runs on eleven hits. Daniel Sondag got the start but looked at a no decision after pitching five innings, and despite strong pitching Oberlin had his number knocking two of his pitches over the wall. Connor Tagg pitched a 2/3 of an inning and picked up the win, with a strike out.

Aleghany came out swinging in the second game however knocking in 13 runs of their own. A few big innings, a five run second and back to back three run innings in the fifth and sixth. This buried the Spartans, who sputtered after many strong wins, managing seven hits but only bringing in three. Jake Shields had an off game and only faced nine batters, giving up five runs and three walks and as a result was stuck with the loss.

The Spartans managed to bounce back in Wednesday however as they edged out Hidelberg here at Case. The cool weather seemed to keep down the explosiveness and instead the game remained close and well fought. The Spartans scored single runs in the fourth and the sixth, and were able to hold Heidelberg to a single run in the top of the fifth. The defense was lead by Spartan pitcher Kevin Johnstone, who pitched a complete game. Johnstone struck out seven of the 36 batters he faced and was able to keep the Student Princes at bay.

The Spartans played Baldwin Wallace on Thursday after the Observer went to print. They return to action in a double header against Denison on Saturday and then another two game set on Sunday against Oberlin. The Spartans will then finish the regular season against John Carroll in the Progressive Field game on Tuesday at 2:00 PM. Tickets can be downloaded from the athletics website for free. The Spartans are poised to continue into postseason play and so look for game by game recaps online as the Observer will continue coverage even after we are done publishing print issues for the semester.