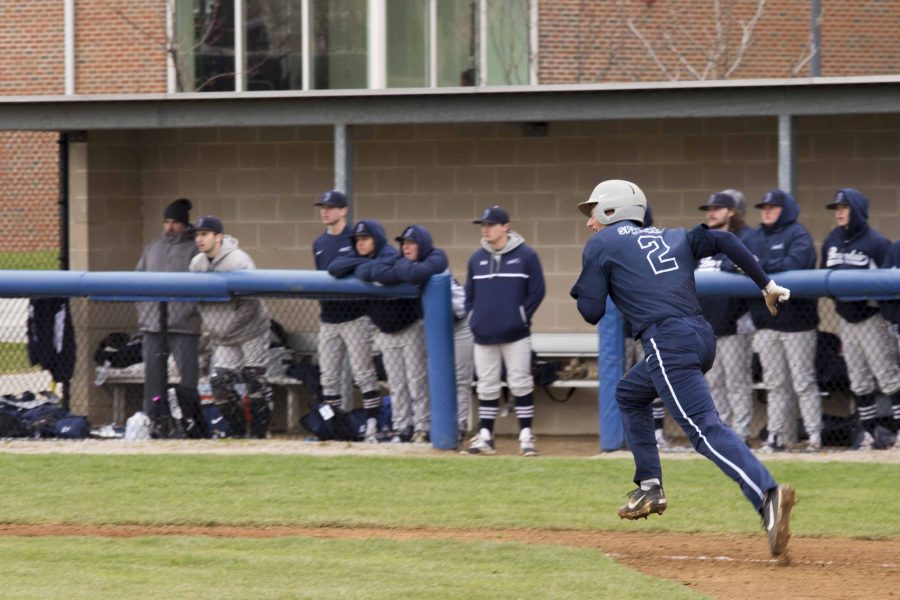 Noah Mehrle heads toward first after connecting on an offering earlier this season.

The Case Western Reserve University baseball team split their four-game weekend series against No.16 Washington University in St. Louis (WashU). This was the last week of conference play for the Spartans as they finished play in the University Athletic Association with a record of 11-5 and sit in second place. The Spartans moved to 17-14 overall on the season.

The team did manage two hits for the contest, both of which came in the sixth inning. Fourth-year catcher Eric Eldred led off the inning for CWRU, and he advanced to second thanks to a single from first-year first baseman Casey McConihe later in the inning. That was all the offense Spartans would be able to muster in the contest.

In the second half of the doubleheader, the CWRU was able to bounce back and post a 5-1 victory to even the series against WashU.

The Spartans managed all the runs they would need in the second inning as five runners crossed home plate. McConihe started the effort for the Spartans in the inning with a single. He then advanced to third thanks to a double by first-year designated hitter Chris Shorter. After a walk by second-year third baseman Jacob Kucia loaded the bases for the Spartans, third-year second baseman Alex Capetillo was hit by a pitch to send the first runner home. The real damage came when fourth-year center fielder Aaron Cain scored a triple, driving in three runs to put the Spartans up 5-0.

WashU put up one run later in the contest, but it would not be enough as the Spartans held on for the victory, giving pitcher Jake Shields his fourth win of the season. Shields improved to 4-3 on the season after pitching a complete game with three strikeouts and only allowing six hits.

In the second doubleheader of the weekend CWRU once again split with a shutout defeat in the first contest, paired with an encouraging 10-1 victory in the second game of the day.

In the first contest, CWRU struggled offensively, registering only four hits. Cain was the highlight offensively, going 2 for 4. On the defensive side of the ball, second-year starter Corey Brown pitched well in a losing effort, giving up three runs in 4 2/3 innings, falling to 1-1 on the season.

The Spartan offense exploded in the second half of the doubleheader in a 10-1 rout of WashU. Shorter led the way for the Spartans in the contest, hitting a home run in the both the first and fourth innings, driving in three runs. Coupled with Shorter, fourth-year right fielder Tony Damiano also collected two hits, driving in four total runs. Cain added three hits, scoring three runs. McConihe was the winning pitcher for the Spartans, allowing only one run on four hits in seven innings, improving his record to 2-0.

With the conclusion of conference play, Head Coach Tom Englander was, “proud of where the team has gone.” He also “looks forward to the remaining games [the Spartans] do have.”

The Spartans play on Saturday, April 22 at home against the University of Chicago at noon to start a four-game weekend series.