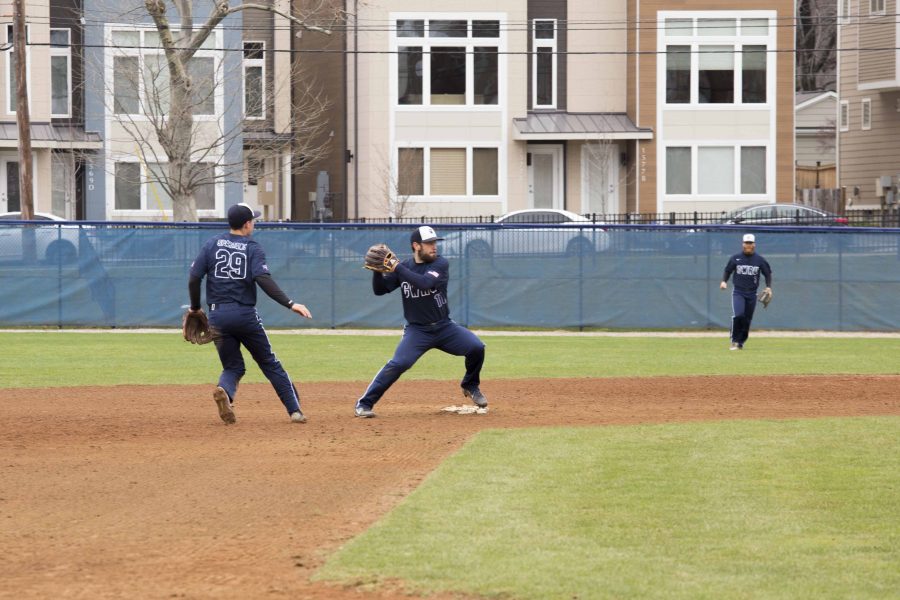 The Case Western Reserve University baseball team played an impressive four game series this past weekend against New York University (NYU), going 3-1 against their conference rival. The Spartans advanced to 15-12 overall including an impressive 9-3 overall in the University Athletic Association.

In Friday’s contest, the Spartans won a close 5-3 contest in a come-from-behind effort, extending their season long winning streak to seven games.

NYU put up two runs on second-year pitcher Mark Gross in the first inning, who earned the win and improved to 3-3 on the season. After the Violets went up 2-0, CWRU would hold them scoreless until the seventh inning. The Spartans found some life in the fifth inning after a bases-loaded single by fourth-year right fielder Tony Damiano tied the game up.

In the top of the seventh, fourth-year left fielder Josh Neal, who went 3 for 4 in the contest, leading all Spartan hitters, put his team up with a solo home run.

After NYU tied the game in the bottom half of the frame, CWRU was able to take the lead again in the eighth inning. After fourth-year catcher Eric Eldred reached first on a single, he was able to score off of three wild pitches from the NYU pitcher. With more pitching struggles from NYU in the inning, the Spartans were able to plate another runner thanks to more wild pitches, pushing the lead to 5-3. Third-year reliever Liam Killingstad would eventually close out the contest, and the Spartans won the game.

During Saturday’s action, the Spartans split a doubleheader, winning 2-1 in the first contest but falling in the second contest 13-9. The Spartans pushed their winning streak to eight games behind a solid performance from fourth-year pitcher Jake Shields, who pitched 7 2/3 shutout innings to get his third win of the season. Shields also had ten strikeouts in his second straight scoreless outing.

After threatening multiple times earlier in the game, the Spartans were finally able to break through in the fifth inning after Neal hit an run scoring single. In the sixth inning, second-year third baseman Jacob Kucia scored on a wild pitch to push the Spartan lead to two. NYU scored a run in the ninth, but was unable to complete the comeback.

The Spartans’ second game turned into more of an offensive clinic as the two teams combined for 22 runs in a 13-9 Violets’ victory. CWRU got the scoring started in the top of the first inning after a double by second-year designated hitter Tyler Wypiszenski scored Damiano.

NYU responded with three runs of their own in the first inning and put up another in the third. The Spartans, however, came on strong in the fourth inning, plating five runs thanks to a run by Wypsizenski and a grand slam by third-year second baseman Alex Capetillo, giving the team a two-run lead. NYU was able to add another run in the bottom of the inning to cut the deficit to 6-5.

From there, the game was all NYU as they scored eight more runs between innings six through eight to open up a large lead on CWRU. Three runs from the Spartans in the top of the ninth inning made the game more interesting, but it would not be enough to get back in the contest and keep the team’s winning streak alive.

In the final contest of the weekend, the team exploded for 15 runs in a seven-inning game; it ended early due to the mercy rule with a 15-4 final in favor of the Spartans. The offense collected 12 hits and nine walks in a game in which six Spartans’ hitters registered an RBI.

After the Spartans struck first in the contest with two runs in the first inning, NYU responded with a run of their own in the bottom of the frame to cut the lead 2-1 after one. Between innings three through six, the Spartans combined for 13 total runs, including seven in the fifth inning. Second-year pitcher Corey Brown earned the win for CWRU, his first of the season.

He said, “The team was able to make adjustments and make them well.”

Englander would not look ahead very far, stating his goal is to win “win Friday’s game.”

The Spartans will play Washington University in St. Louis in a four game series this weekend at home, starting with a game at 3 p.m. on Friday, as Englander noted. They follow with a doubleheader on Saturday—first pitch at noon—and wrap the series up on Sunday at noon. Nobby’s Ballpark should be packed as the Spartans finish conference play.