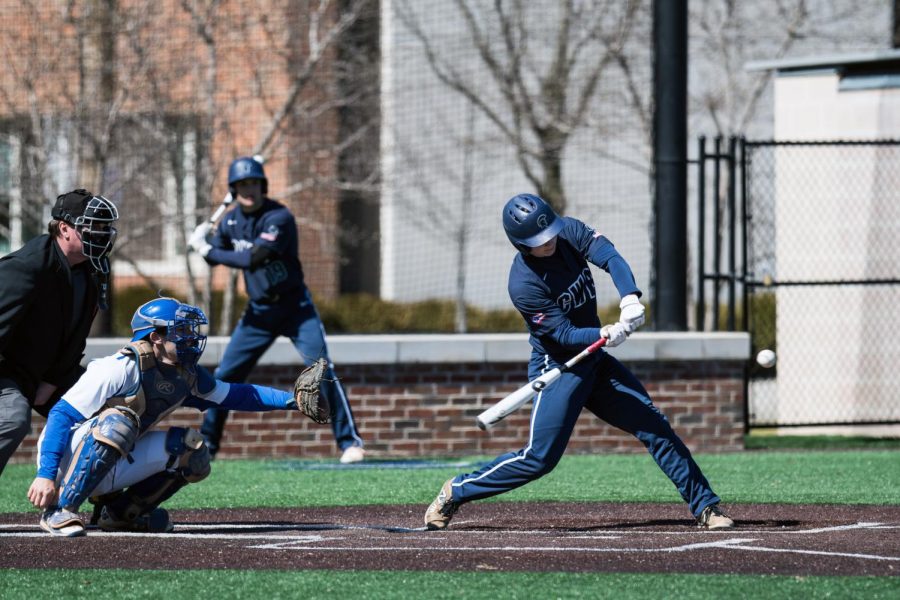 Jake Ryan swings at a pitch. Ryan was named a UAA Hitter of the Week after finishing the week batting .556 with five runs scored, one double, three home runs and five RBIs.

Despite a postponement on Sunday, April 21, the Case Western Reserve University baseball team added two wins to their ledger in style. On Thursday, April 18, the Spartans upset No. 15 College of Wooster, 21-10, in Wooster. On Saturday, the team defeated Heidelberg University, 8-1.

The star Spartan of the week was Jake Ryan. The second-year outfielder went 5-for-9 over the two games, slugging three home runs and a double. He also contributed five runs scored and five RBIs and was hit by two pitches. Ryan’s three home runs in the victory over Wooster tied a program record. For his efforts, d3baseball.com named Ryan to their team of the week as an outfielder and the University Athletic Association (UAA) also named him one of their hitters of the week.

In the Thursday night game, the Spartans jumped to a 4-0 lead in the first inning, a sign of things to come. Second-year outfielder Benjamin Stawicki hit a two-run home run, the first of six for CWRU during the game. His home run followed a two-run single from fourth-year third baseman Jacob Kucia.

After the Fighting Scots cut the deficit to two in the second inning, Ryan responded with his first of three home runs to lead off the third inning. The team added two more runs in the inning and Ryan added two more himself in the following inning with another home run.

After the inning, the Spartans were up 16-4, and the result of the game was not in doubt. The team added five more runs in the seventh inning to score their most runs since a 21-0 victory in 2014.

While the offense was not as prolific in the following game, the Spartans still scored eight runs in the victory. The pitching also stood out, with first-year pitcher Nick Denove and third-year swingman Scott Kutschke combining for nine strikeouts and just one walk on the mound.

The Spartans added two runs in both the sixth and seventh innings to pad their lead and secure the victory.

After the two non-conference wins, CWRU has a 20-11 record this season. The team has just five games left, a four-game series this weekend with UAA opponent Brandeis University and a single game against John Carroll University on Tuesday, April 30. All five games will be at Nobby’s Ballpark on campus. The Spartans (5-5) sit in third place in the UAA, though Washington University in St. Louis (12-2) has already clinched the conference title.