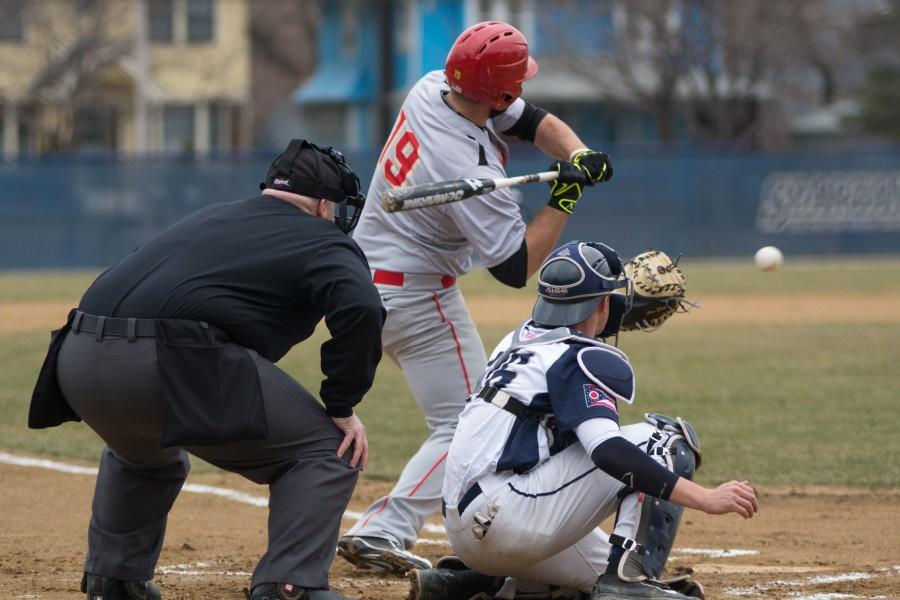 Sophomore Catcher Eric Eldred receives the pitch for a strike against the Otterbein batter. Eldred and the Spartans picked up their first win at home this season against Otterbein on Wednesday afternoon.

After a last minute cancellation, the Spartans opened their home opener a few days early as they hosted St. John Fisher College for a doubleheader on Saturday afternoon.

The Case Western Reserve University baseball team has continued its struggles as it hopes to find its footing, dropping the pair of home opener games before splitting the doubleheader against and wrapping up the week with the originally scheduled home opener against Otterbein University with a win.

Despite the struggles, the Spartans stand at 6-7 overall and look poised to return to their expected high level of play.

The squad opened the post-University Athletic Association (UAA) tournament portion of their season with a pair of losses to the visiting Cardinals. In the opening cap, the Spartans started slow falling behind 3-0. The Spartans rallied to tie the game in the fourth when senior Jordan Swisher singled to get on base and scored on a St. John Fisher miscue, a balk. Rob Winemiller, scored off an RBI single from Kerrigan Cain, and the Spartans led until the Cardinals tied the game in the sixth before grabbing the lead in the top of the ninth. The Spartans were unable to answer the bottom and let the game slip away.

The Spartans beat themselves in the second matchup as they committed eight errors, and St. John Fisher put together a six run seventh inning to break a 5-5 tie and win the game.

Sunday saw the Spartans travel to face off against Mount Aloysius College. The Spartans jumped out to a strong 9-1 victory in the first game, but dropped the second 7-4.

The Spartan pitching team of junior Neal Krentz and Dan Sondag combined to give up only five hits in the opening game. Krentz gave up a mere three hits and one run in six and one-third innings of work to lead the Spartans to their first win in a few weeks.

The Spartans then faced off against Otterbein to win their first home game of the season on Wednesday night. The hero of the night was Andrew Gronski, who blasted a three-run homer to back up sophomore Connor Faix’s strong pitching effort. Faix pitched seven strong innings, giving up only one run on six hits and a pair of walks.

Despite the lack of results back in the UAA tournament, a pair of Spartans were named to the 2015 UAA Baseball Championship Tournament team. Sophomore Antonio Damiano and senior Jordan Swisher were elected to the team by the coaches.

Damiano hit a team best .375 with four extra base hits and bringing in eight. Damiano added to his performance with four stolen bases and a Spartan high .447 on base percentage.

Swisher batted .364 (12-for-33) with three doubles, a home run, five runs scored and six runs batted in. He recorded the tournament’s top single-game performance when he went five-for-five with a double, home run and four runs batted in against Brandeis University in the Spartans’ final game of the tournament. Swisher led the team with a .545 slugging percentage and threw out four runners attempting to steal.

The Spartans played Otterbein again on Thursday after The Observer went to print, but will face off against Denison University Saturday.