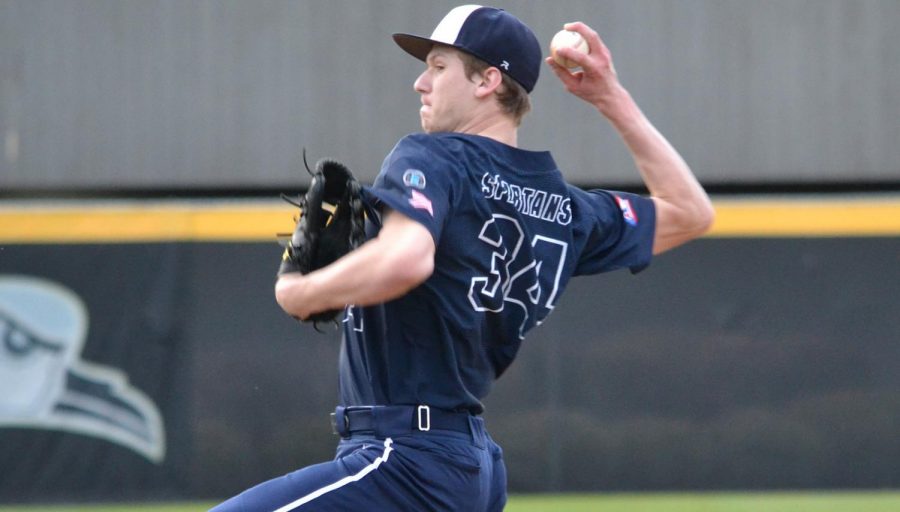 First-year pitcher Keaton Stankowski winds up a pitch. The Spartans recently traveled for their spring break trip, finishing the week with multiple high-scoring wins. The wins include a 19-1 victory against Roger Williams University and an 18-6 victory against Trinity University.

The Spartan baseball team opened their spring break trip in Atlanta with a two-game series against Oglethorpe University. CWRU defeated the Stormy Petrels 9-0, which was the third straight win for the Spartans. The game had several highlight moments, including second-year pitcher Matt Levine pitching seven shutout innings and second-year left fielder Jake Ryan and third-year centerfielder Samual Neal each hitting their first home runs of the season.

CWRU started the game strong, scoring three runs in the first inning. They increased their lead in the fourth with a solo home run by Neal. An additional run came from a sacrifice fly by fourth-year catcher Tyler Wypiszenski, and a two-run home run by Ryan brought the team to a 7-0 lead at the end of the fourth. The Spartans scored in the fifth on a throwing error and in the seventh on a ground out, bringing the Spartans to 9-0. Two more scoreless innings for Oglethorpe brought the game to an end.

The second game of the series occurred the next day. The Spartans claimed another win, defeating Oglethorpe 6-2. Just as they had the previous day, the Spartans started strongly with four runs in the first inning, three of which came from a home run hit by first-year designated hitter Nathan Shapiro. The hit was his first career home run. In the third inning, a solo home run by Wypiszenski brought the Spartan lead to 5-0. Oglethorpe was able to score a run in the sixth, but CWRU responded with a run, maintaining a five run lead. The Stormy Petrels scored one last run in the ninth, but fourth-year pitcher Corey Brown was able to end the game without any more runs for the hosts.

The Spartans continued their spring break at the 2019 Spartan Southern Classic at Lexington County Stadium in Lexington, South Carolina. The Spartans opened the tournament with a doubleheader against Roger Williams University (RWU). The day ended with two losses for CWRU.

The first game started roughly for the Spartans who faced a 6-2 deficit heading into the sixth inning. CWRU fought back, igniting a comeback in the sixth with three runs. In the seventh, second-year shortstop Jacob Lott was hit by a pitch with the bases loaded, evening the score. Fourth-year second baseman Rocco Maue singled in two runs, giving the Spartans their first lead of the game, 8-6. RWU scored in the eighth, and a walk-off double for the Hawks in the ninth ended the game, 9-8.

CWRU faced a similar start in the second game, with the Hawks scoring four runs in the first inning. Three more in the second inning and one in both the third and fifth sunk the Spartans to an early 9-3 deficit heading into the bottom of the fifth. The Spartans scored two with run-scoring singles from third-year first baseman Noah Mehrle and Neal, but RWU responded with two runs of their own in the sixth. Three runs for the Spartans brought the score to 11-8 in the ninth, which would ultimately be the final score for the game.

The game started strongly for the Spartans and stayed that way for the whole seven innings. The fourth inning proved particularly strong for the Spartans because the team scored 12 runs, bringing the lead to 16-0. Three more Spartan runs and one RWU run in the sixth brought the final score to 19-1. CWRU recorded a season-high 24 hits in the game, and the 19 runs scored were the most runs the Spartans have recorded since a 20-15 win in 2017.

The teams faced off for a final time the following day. The game was close at the end of the second, with RWU leading 4-2. Four runs in the fourth for the Spartans brought CWRU into the lead. They held that lead for the rest of the game, as third-year pitcher Scott Kutschke entered at the top of the fourth and pitched six shutout innings. The Spartans scored two more runs in the eighth and finished the game with an 8-4 win.

The Spartans then faced Western New England University (WNE) for a two-game series. In the first game, CWRU fell 2-0, missing opportunities to score. The team did not let the loss discourage them, and won the second game against the Golden Bears the next day.  The Spartans competed strongly, scoring at least one run in each of the first six innings and brought the score to 11-0. Mehrle allowed a run in relief in the seventh. Both CWRU and WNE scored a run in the eighth, ultimately ending the game in a 12-2 Spartan win.

The final spring break game for the CWRU was against Trinity College. The Spartans ended the week strongly, scoring 18 runs on 18 hits, and recording a total of 14 strikeouts by three pitchers. The 18-6 win brings the Spartans to an 8-6 overall record.

The Spartans will return to the field on March 23, when the team will take on Fredonia in Cleveland with a doubleheader set to start at noon.