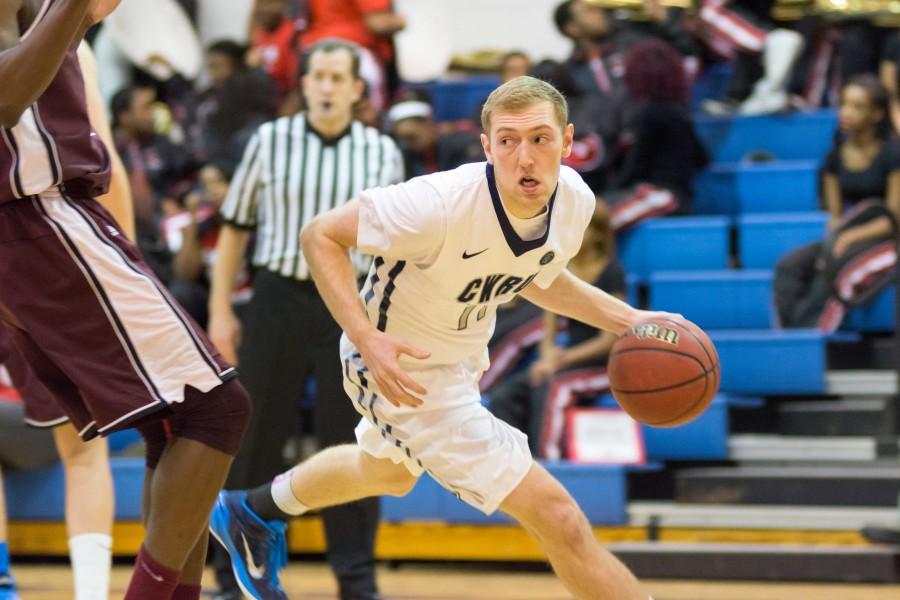 Junior Matt Clark tries to find the open man in the Spartan’s loss against the University of Chicago Maroons.

A gym packing home crowd pumped up from the Provost’s Pizza Night, Neon Weekend and free smoothies from the Jolly Scholar could not prevent the Case Western Reserve University’s men’s basketball team from dropping a crucial double against conference rivals University of Chicago and No. 12 Washington University.

The losses drop the Spartans back in the hotly contest University Athletic Association (UAA) race, with five games left on the schedule. To have a chance of finishing at the top of the UAA, the Spartans’ best shot now is to win out—something definitely within the realm of possibility, with more manageable opponents such as New York University, and Brandeis University on the immediate horizon. At 14-6, the Spartans still have a good chance to break the school record for wins (17), needing to win four of the final five in order to break the mark.

Against tough Chicago and Washington squads—teams recently ranked as highly as No. 17 and 7 respectively—the CWRU men played with terrific effort, but just could not finish against their resilient UAA foes. Against the Chicago Phoenixes, the Spartans hung around with hot shooting and tough defense until the final minutes, when Chicago pulled away with unlikely crunch-time baskets and ruthlessly efficient free-throw shooting. Five Spartans ended with double figures, led by an outstanding effort from point guard Jimmy Holman, who recorded 18 points and 8 assists on 7-13 shooting from the floor. Against Washington (Mo.), however, the Spartans could not replicate an upset effort from when they knocked off the Bears in St. Louis. Despite pacing with their opponents for much of the first half and stretches of the second period, CWRU could not remain competitive down the stretch, when the Spartans hit a cold stretch from the field and the Bears remained hot. In the game, the Spartans allowed their opponents to shoot 54.8 percent from the field, including a decisive 50 percent from three-point range.

Looking ahead, the upcoming road matchups (Friday, Feb. 13 and Sunday, Feb. 15) against lower-ranked New York University and Brandeis University are essential must-wins in the midst of a tight conference and NCAA chase. Further in the future looms No. 14 Emory University, a potential upset target that the Spartans would no doubt love to pull off. The final weekend includes “Throwback Weekend” events as well as Senior Day against archrival Carnegie Mellon University, all of which promise to be fun-filled student events.