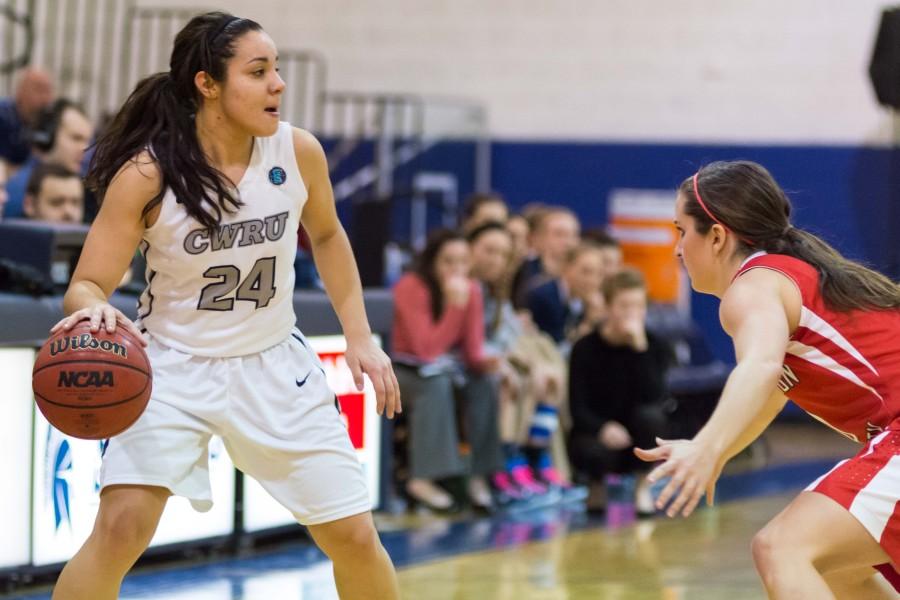 Amanda Germer faces off against a Washington University defender.

The Spartans’ losing streak continued over the weekend, stretching to eight after away losses to New York University (NYU) and Brandeis University. They fell to 7-15 overall and 1-10 in the University Athletic Association.

The team lost to 11th-ranked NYU 69-52 on Friday at the Jerome S. Coles Sports Center in Brooklyn.

Senior and junior forwards Berit Eppard and Laura Mummey were the scoring leaders for the game, both scoring 10. However, NYU’s Megan Dawe had an outstanding night, with a game-high 25 points.

Leading the game in rebounds was senior guard Brooke Orcutt with 10; Orcutt out-rebounded the rest of the field by six. However, the Spartans were behind in the rebounding differential 32-41.

The NYU Bobcats dominated the game from the beginning, powering to a 47-30 lead at the half off of 44 percent shooting. They capitalized on CWRU turnovers, a continuous problem for the Spartans, scoring 25 points off turnovers to the Spartans’ 11.

Although the Spartans rallied back with a 12-4 run in the middle of the second half, they were unable to take the lead, with NYU deciding the game in the last 10 minutes.

The team next traveled to the Red Auerbach Arena in Boston, to take on Brandeis University on Monday. The game was scheduled to take place the day before but was delayed due to heavy snow and ice in the area.

The latest snowstorm in a string of major winter weather hitting Boston over the past few weeks left parts of the area with as much as 20 inches of new snow only days before the game.

Notwithstanding, the Brandeis Judges defeated the Spartans 77-68, despite Orcutt’s double-double of 21 points and 10 rebounds.

Although CWRU maintained a lead early in the first half and led Brandeis both in points off turnovers and second chance points, the Judges bench dominated the Spartans, outscoring the women’s team 41-11.

By the end of the game, Brandeis had thoroughly secured the lead, with it reaching 17 before ending at nine at the final buzzer.