Bats stay hot, Spartans win 3 of 4 over the weekend 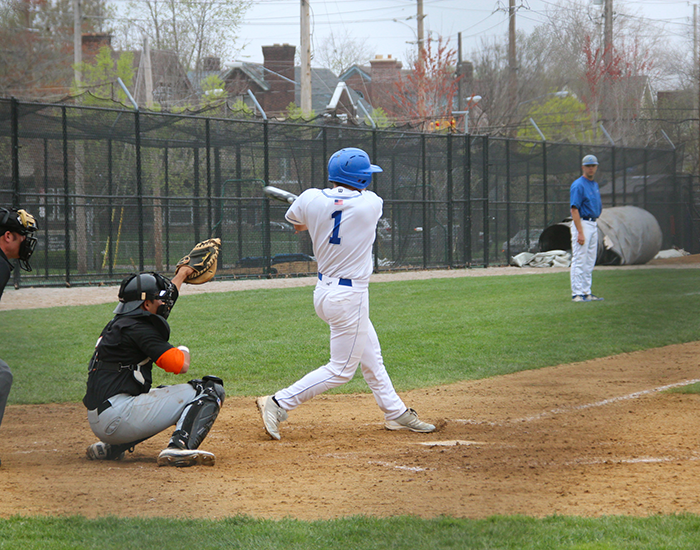 Senior shortstop Matt Keen has been one of the top offensive producers for the Spartans. Keen is batting .312 and has 16 RBIs this season, second on the squad.

Coming off a week of rest due to the ever-changing Cleveland weather, the Case Western Reserve Spartans went on a road trip over the weekend. On Friday, Mar. 29, the Spartans visited Ohio Wesleyan University and split the doubleheader. A day later, they drove out to Thiel College in Greenville, Penn. for another doubleheader. The Spartans offense stayed hot as they outscored Thiel 20-6 over the two contests for the sweep.

In the first game against Ohio Wesleyan, the Spartans surrendered an extra-inning lead and fell 6-5. After scoring three runs in the third inning, Case wasn’t able to subdue Battling Bishops as they chipped away the lead. Heading into the ninth inning with the game tied, the Spartans scored two runs to pull ahead. Senior shortstop Matt Keen drove in a run with an RBI double and sophomore right fielder Andrew Gronski brought home another run thanks to a fielder’s choice. However, the home team refused to quit. In the bottom of the ninth, Aaron Caputo doubled to center field to score two runs and tie the game at five apiece. During the next at-bat, Sean Vollenweider singled to left field to drive in the game-winning run.

The second half of the double header saw the Spartans strike first again with two runs in the second inning thanks to a pair of Bishops’ errors. Sophomore designated hitter Robert Winemiller and sophomore catcher Jordan Swisher each picked up RBIs during the inning. Once again the Battling Bishops cut into its deficit with a run in the bottom of the second off of an RBI double by Steven Moore. With the score 2-1 heading into the fourth inning, the Spartans offense came alive as Case put up eight runs on a mere three hits. After walks to sophomore centerfielder Kerrigan Cain and senior first baseman Brett Ossola loaded the bases, Swisher came to bat and delivered a two-run single up the middle. Two at-bats later, sophomore leftfielder William Meador added to the lead with a two-run double down the right field line. After two more got on base, senior center fielder Paul Pakan finished off the rally with a three-run homer to center. The Battling Bishops could only put across a single run in the bottom of the inning, but picked up three additional runs in the seventh when Steele hit a three-run homer to left center.

After splitting the double header with Ohio Wesleyan, the Spartans traveled to take on Thiel. Case made quick work of the Tomcats with a 13-1 victory in game one and a close 7-5 win in game two. The Spartans total 20 runs on 33 hits in the doubleheader sweep.

In game one, the Spartans broke a scoreless tie with four runs on six straight singles to open up the third inning. Center fielder Pakan, first baseman Ossola, and catcher Winemiller all drove in runs during the rally. Thiel put one on the board in the bottom of the inning thanks to a single and an error, but Case starter Jamie Hora got out of the jam with a double play and a strikeout. The fourth started off in a similar fashion when shortstop Keen and right fielder Gronski led off with back-to-back singles. Pakan then drove Keen home with a double, and Ossola plated two more runs with an opposite-field single. Swisher, who was the designated hitter, and freshman third baseman Mike Ilacqua accounted for the fourth and fifth runs of the inning with back-to-back RBI singles. The remaining four runs would cross the plate in the eighth due to Gronski’s two-run RBI double and Pakan’s RBI single.

The last game of the weekend got off to another great start as the Spartans continued to play strong with three runs in the first on three hits. Leftfielder Meador singled, stole second, and scored on an error. Three batters later, Pakan drove in another run as he singled up the middle before coming home to score on Winemiller’s first career triple. In the bottom of the inning, the Tomcats were able to respond, scoring three runs on five hits. Trent Smith provided the key hit with a two-run double as the Tomcats ended Spartan freshman starter Neal Krentz’s career-opening streak of no earned runs through 10.2 innings pitched.

Thiel got their first lead of the day in the fourth following an RBI double by Doug Farely, but the Spartans regained the advantage when Cain hit a two-run double to right in the top of the sixth. Refusing to back down, Thiel tied the score in the bottom of the inning on an RBI triple by Eric Steininger. However, the Spartans would clinch the sweep two innings later as Ossola led off the eighth with a walk and eventually came around to score on a pinch-hit sacrifice fly by junior pinch hitter Andrew Frey. Ossola added some insurance in the ninth with a two-out, RBI single.

The Spartans improve to 12-6 overall and are back in western Penn. on Saturday, Apr. 6, for a 1 p.m. doubleheader at Westminster College in New Wilmington. Case will then return home on Sunday to host their first home game at Nobby’s Park for a doubleheader against Wooster.