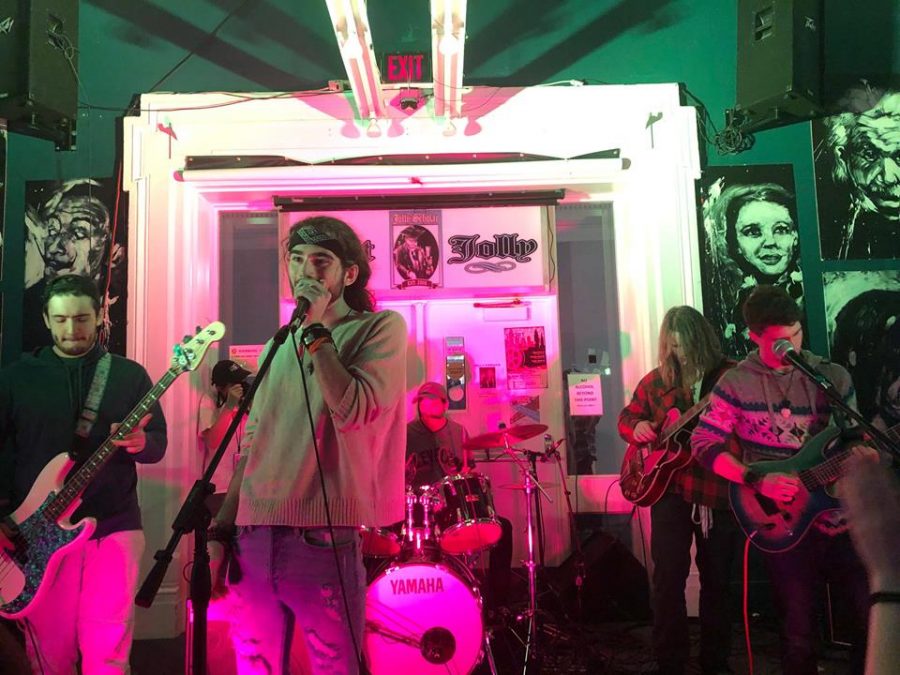 Sticky performed at the Battle of the Bands for a chance to play at Springfest 2019.

If you walked through the Thwing Center last Saturday night, you may have wondered why The Jolly Scholar was louder than your roommate’s alarm at 8 a.m. If you had peeked your head in, you would have seen acts competing in the annual Battle of the Bands. The prize? The opportunity to perform at this year’s Springfest.

Although Battle of the Bands has been around for more than five years, this was the second time it was held at Jolly Scholar; the first time occured in 2017.

“Jolly was a very accommodating venue,” said Kevin Grisser, a co-chair of the Springfest committee.

Starting at 7 p.m., a total of 12 bands performed at Jolly. As audience members flooded in, it became clear that this night would boast a much larger crowd than previous years. Attendance peaked around 9 p.m., and the energy of the house was electric.

“I thought our performance went really well. I heard people chanting ‘sticky, sticky’ even before we got on stage,” second-year student and bass player for the band “sticky” Matt Pukansky said. “The crowd was absolutely phenomenal. Everyone matched our energy, and that just got us even more hyped to play.”

“Sticky” was the penultimate band to perform for the night. They are a newly formed band, and based on the crowd’s reaction to their performance, they decided to continue to stay together as a band regardless of the Springfest decision.

“I haven’t gotten to play live in several years, and it was absolutely amazing to get back onstage,” Pukansky said.

Each attendee of the competition was given a ballot, on which they were to rank their top three acts from the night. Bands were given points based on individual rankings, but the Springfest committee has the final decision.

This is because the committee “takes other factors into account,” Grisser said, “like bands that perform early in the night, when the crowd is much smaller.” The 21-person committee has other responsibilities and consists of two co-directors, a treasurer, an attractions chair, a concerts chair, a marketing chair and five-person committees led by each of the chairs.

“I love the vibe on the actual day of Springfest,” says Grisser. “It’s a long planning process, and can be hectic with setup and teardown, but when you get to see such a huge percentage of our community enjoying themselves, it makes all of the work worth it.”

Results from the competition will be announced early next week, and information about the headliner will also be coming soon via the CWRU Springfest Facebook page.