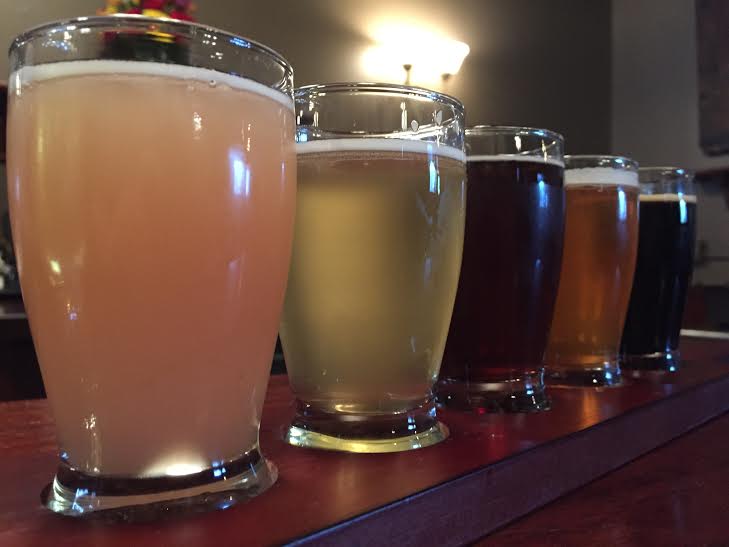 Lakewood is the shining star of Cleveland suburbs. Many suburban hangouts offer the same American family dining where waiters with tons of flair offer you a plethora of domestic beers alongside various fried appetizers; but not Lakewood.

This city offers tons of locally owned and unique bars and pubs and restaurants, which differ from the suburban norm. It comes as no surprise that the highly successful Bottlehouse Brewing Company from Cleveland Heights would open a second location in Lakewood.

The new location is the former Sullivan’s Irish Pub and Restaurant at 13368 Madison Ave. It was packed with patrons during its opening weekend, and like the Cleveland Heights location, board games occupied several tables as gamers sipped their brews. The Bottlehouse owners paid homage to the Irish pub by keeping the beautifully made glass windows and rescuing hundreds of mugs, which they hope to return to their rightful owners.

I was greeted by the general manager, Jared Plotts, who still runs trivia night at the Cleveland Heights location. Plotts, a veteran of the Marines, built up trust with owner Brian Benchek, who wanted an “outsider” to run his new location. Though Plotts has not worked in the service industry, he has run his own small business, and brings a fresh start to the seven-barrel brewery.

Plotts referred to Bottlehouse Brewing Company as the “Little Mac” from Nintendo’s classic game, “Punch-Out!!” The brewery is very much a little guy compared to the sea of American domestic breweries and micro-breweries that are becoming larger each day. Though the brewery may be small, it offers an impressive taplist comprised of 14 in-house beers to choose from and 10 different in-house meads, an alcoholic beverage made by fermenting honey with water.

Bottlehouse’s secret to success is not a secret at all. Plotts explains, “We really just do what we feel is right, and what we personally would want in a place. We don’t go out of our way to appeal to everyone. I think people can sense that when they’re in here.”

I noticed as I sampled my beers that many patrons came up to the bar and said what types of beer they usually like and the bartenders would successfully match them up with something similarly brewed in-house. In many ways Bottlehouse was a great learning space for beer fans who not only want to try more beers, but those who would like to learn more about beer.

I first sampled the Erie Coast IPA, which was a very juicy and tropical beer with a huge hop aroma. This IPA was incredibly drinkable and not dry at all, making it a great beer for hop fans in the summer.

My favorite of the beers I sampled was the Proxima Centauri, a malty, roasted and slightly smoked red ale. Red ales are usually my least favorite beer, but the smoky taste really changed my red ale palate. I felt like I was drinking a smoked porter, but lighter in taste and red in color.

Sour beers are popping up all over Cleveland and can be rather hit-or-miss. I really enjoyed the Empress, a sour berliner-weisse. It had hints of peach, yet was tart and light in flavor. The beer was in many ways like a tart cider, which may bridge the gap between cider and beer fans.

The Plum City, a gose, was very colorful with shades of pink and lavender, and it had a great floral aroma. The beer had obvious hints of plum and coriander and was mildly tart in taste.

I finished my beer sampling with the Rising Star coffee stout, a rich and roasted light and drinkable stout without an overpowering coffee taste. I tried one mead, the Ohio Gold, which was aged in bourbon barrels and had tastes of apple, honey and oak with a dry finish.

Bottlehouse also offers food, including warm mini pretzel baguettes with house-made beer cheese and entrees like chicken paprikash and shepard’s pie prepared by Karen King Catering. Everything was reasonably priced, with most options under $10.

If you are looking for an excuse to check out Lakewood, Bottlehouse Brewing Company is an excellent first stop.