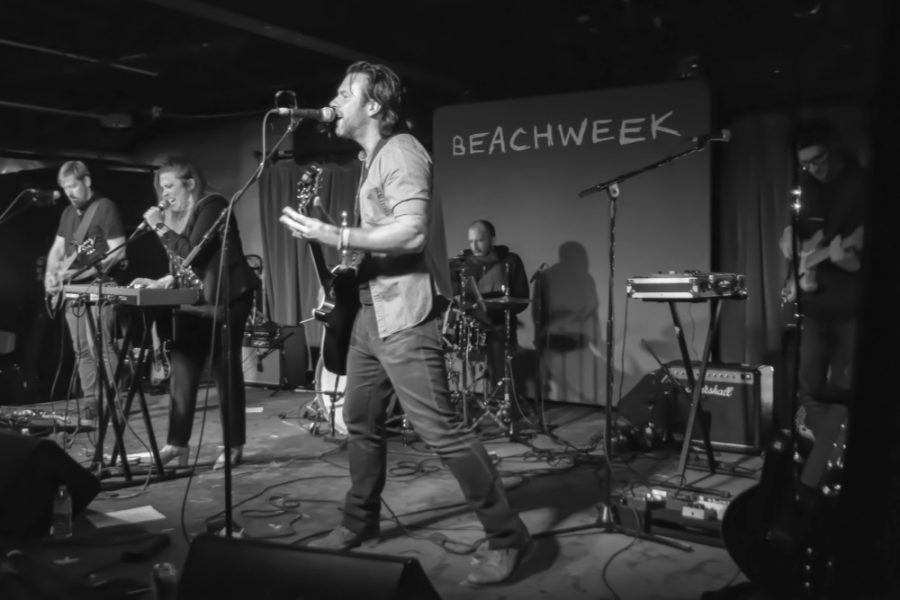 With a name like Beachweek, this band, formerly known as The Sublets, evokes a lively, yet unfamiliar scene in often overcast Cleveland, with music to match. Lead singer and guitarist George Chase explains the original band name belonged in the pop punk genre that the band felt they had grown out of.

With this realization, Beachweek announced their name change at their most recent performance at Grog Shop on May 11. Other local bands performed as well, including Lemon Sky, American Takeout and All Is Harvest.

Chase always loved music and was even in a band in high school. However, he had an eight-year lapse in music due to a number of deaths in his family that caused him to bury himself in work. It wasn’t until the opener for a catered event at a restaurant he owned didn’t show up and he subbed in, that he uncovered his hibernating desire to perform.

Chase began performing on his own, mostly covers at bars, restaurants, coffee shops, and clubs. However, he soon realized he wanted to stray from covers and focus on original material and started trying to put together a band.

Chase met bassist Daniel Lee and drummer Stephen Nicholson in March of 2018, through a mutual friend. The trio decided they wanted a more mature, fuller sound so guitarist Britton Roberts joining in late April of the same year.

Although they loved jamming together, the members also wanted a keyboardist and a female singer for higher harmonies and reached out to Chayla Hope, who was the frontwoman of Seafair, another local band, at the time. Hope had been having some trouble with Seafair and decided to join Beachweek that winter.

Despite performing at over half a dozen venues including the Agora and Grog Shop, the band has yet to release their debut album, which is set to come out in June of this year.

Their EP was supposed to be released in September right before Hope joined, as the four members had spent hours in the studio and Chase just need to record a few vocals. However, the band didn’t want to release anything without Hope, pushing back the release date and giving the band’s music more time to mature from pop punk to pop rock, hence the name change.

Looking back, Chase realizes he formed a subconscious connection with music, even when he wasn’t performing.

“The whole reason I got into bars and restaurants in the first place was because I wanted to work at a place where I could book bands and keep up with the pulse of the music scene,” Chase said.

Other band members have the same experience of giving up music at a point as well, providing a common experience that has progressed what started as a professional relationship to a relaxed atmosphere.

“Sometimes we have bad days but when we’re in the practice room, everyone’s ideas are heard,” Chase said. “We have a great, very energetic environment.”

This friendly relationship reflects well in their music. “Chayla’s vocals are so powerful and i love listening to Beachweek,” rising fifth-year student Humza Khan said. “I look forward to listening to their EP when it is released.”

Beachweek will be performing at Music Box Supper Club with The Dead Licks, a rock and roll band from Chicago, on May 23 and will have five shows including an acoustic set, at North by Northside, a two-day music and arts festival in Cincinnati, Ohio on May 24-25.