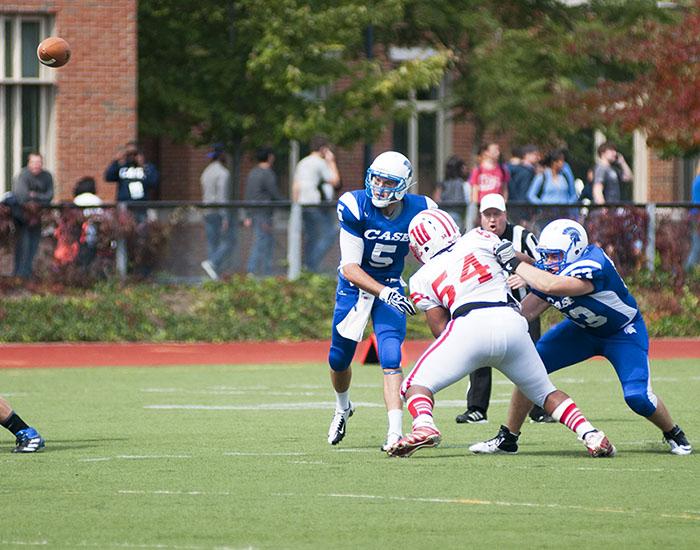 Need win vs. Tartans, help for share of UAA Championship

The Case Western Reserve University football team lost the inside track to a fifth University Athletic Association Championship in six years with a 10-7 setback versus Washington University on Seniors’ Day at Case Field.

In a game that saw little offense generated by either side, Washington held the Spartans to a season-low 184 total yards of offense and scored all 10 of its points in a span of 2:08 in the third quarter.

The Spartans first got on the board late in the opening period, when senior quarterback Erik Olson connected with senior wide receiver Vinny Bell for a 12-yard touchdown pass. Bell’s first career score ended a six-play, 44-yard drive, and freshman Won Kun Park hit the extra point to make the score 7-0 with 1:42 remaining in the first quarter.

After each side saw several drives fizzle out, the Bears threatened to cut into the lead with 4:55 left in the first half. However, the Spartan defense held its own territory and forced a 41-yard field goal attempt that missed wide to the right.

The game went to halftime with the hosts ahead by a 7-0 score.

On their opening drive of the second half, the Bears drove deep into Spartan territory with a nine-play, 40-yard drive that ended in a 25-yard field goal by Alex Hallwach at the 7:31 mark of the third quarter.

After forcing Case to a three-and-out, the Bears’ offense hit the biggest play of the game, when quarterback Eric Daginella connected with wide out Tim Bartholomew for a 64-yard pass that put the visitors at the Spartan one-yard line. One play later, Daginella rushed into the end zone to cap the four-play, 65-yard drive. Hallwach hit the point after, and the Bears led 10-7 with 5:23 remaining in the third.

Several possession changes then occurred before a botched snap on a Spartan punt set the Bears up with a first down at the Case five with 10:41 left to play. However, the Spartan defense came through once again and held Washington to a 23-yard field goal try that was blocked by senior linebacker Kevin Nossem at the 6:02 mark.

Unfortunately, the Spartan offense couldn’t drive out of its own end of the field on its following two possessions, and the Bears held on for the three point win.

Sophomore running back Manny Sicre rushed for a game-high 68 yards on 23 carries and added 38 yards receiving on four catches. On defense, senior linebackers Ryan Ferguson and Wade Self tied for game-high honors with 12 tackles apiece.

The Spartans wrap up the season on Saturday, Nov. 10 vs. rival Carnegie Mellon University in the 27th Annual Academic Bowl at 2 p.m. at Case Field. The game has also been designated as the Billy Deitmen Memorial Game with all proceeds going to benefit an endowment in celebration of former Spartan captain Billy Deitmen ’11, who passed away unexpectedly at the age of 23 on Oct. 18. All former Spartan teammates of Deitmen are invited to participate in a pregame ceremony and presentation.