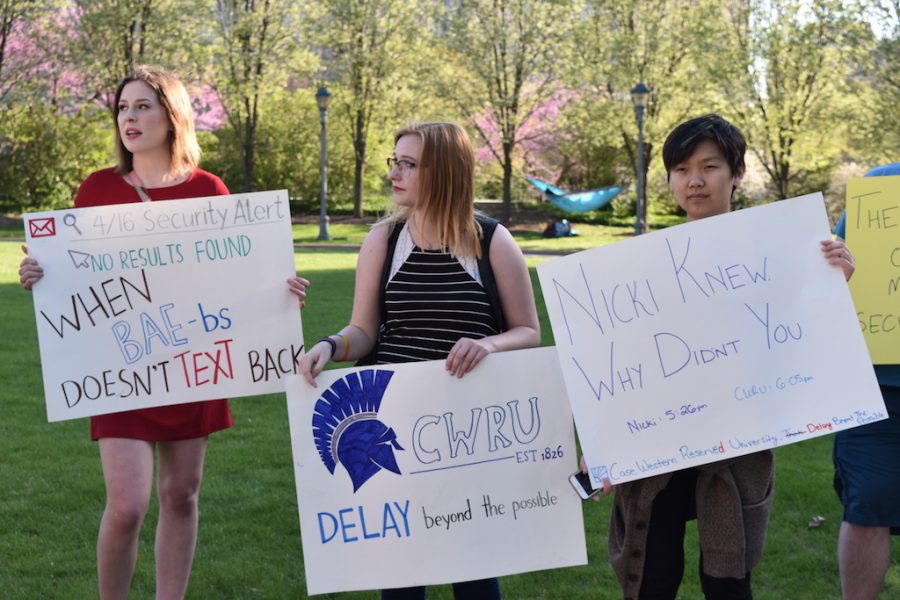 The Facebook Live-broadcasted shooting on Sunday, April 16, triggered panic and disappointment on Sunday and protest and conversations in the week that followed. Criticized for its delay in sending out a security alert after the incident, Case Western Reserve University is seeking to rebuild trust among students with changes.

The fatal shooting committed by Steve Stephens at around 2 p.m. on Sunday became a cause for concern to CWRU students soon after it was livestreamed on Facebook by the killer. The concerns, along with panic and criticisms, escalated as students on campus waited for a security alert from the university to confirm the situation and to provide safety instruction, which was not delivered until 6:00 p.m.

During the four hours between the shooting and the email, many students and their parents received information related to the incident from various sources, including Fox8, CNN, Cleveland Police and even with commentary from Nicki Minaj. Misinformation also spread at the same time. Many believed that Stephen had committed other homicides, a claim made by Stephen but never confirmed by the police. Some others were worried that the suspect was targeting students involved in Greek life, a piece of information that was not verified either.

Disagreement on meaning of “immediate threat”

In the USG General Assembly (GA) meeting on Tuesday, Vice President for University Marketing and Communications Chris Sheridan, who was present to address student concerns, gave a more direct answer to the administration’s stance on the incident. When USG representative Ren Weeden asked her if she thought that a man threatening to murder people in Cleveland was not an immediate threat, Sheridan answered definitely. “Yes,” she said.

However, although the shooting did not happen on campus, many students and their parents did think that the incident posed threat to CWRU members. During the meeting, many students voiced their doubt on the definition of “clear and present threat on campus.”

“What is your definition of clear and present danger on campus if someone less than three miles away who is saying that they are going to continue to kill, and keep in mind that’s eight minutes in a car, he did have a car; that’s 25 minutes for me on a run,” graduate student Maya Monroe asked in the GA.

Demes responded that although the definition of the radius of the security alert coverage will not be expanded by the U.S. Department of Education, CWRU police can send out notifications whenever it is necessary. Because of this and the concerns sparked by the incident, CWRU police and the administration are looking for a change in their future responses to future safety hazard both on- and off-campus.

“We are looking at holistically the information we receive not only from police reports and things that are reported to the police agency, but also what is being said on social media and what we are hearing from our dispatchers and other sources that received information from the public,” said Demes in a separate interview after GA.

“Moving forward, when we receive the information, there is, certainly a comfort level, with us stepping outside of our normal Clery reporting role and into a role of sharing information we received, even if it’s not complete or verified information. and then building on it with follow-ups,” said Demes.

On Sunday afternoon, students’ frustration was also exacerbated by the news that other institutions in the region, such as Cleveland State University and University Hospitals Cleveland Medical Center, already implemented lockdowns prior to CWRU sending out the alert. Demes explained why a complete lockdown at CWRU would be different and might have presented some additional safety concerns.

“The difficulty with a lockdown as we might do in a middle school or elementary school, is, if you lock the door and don’t let anyone access, then you have innocent people that are stuck out on campus that can’t get into any of the buildings and take cover,” said Demes. “If you have a larger public institution and a lot of commuters, and one or two buildings that are typically open and most of your student body is within those buildings a lock down might make sense.”

He also pointed out that sometimes the term “lockdown” is misused. According to Demes, when institutions like University Hospitals implements a lockdown, it in fact means that doors can only be accessed by cards. Therefore, even though Demes and his team had considered a complete lockdown on Sunday, wherein card readers stop functioning, they did not go with the option. Instead, only three open buildings, namely Rockefeller, Bingham and DeGrace, were on lockdown because students were having activities insides these buildings.

The delay in sending out the security alert also resulted in a protest on Tuesday immediately before GA. The protest, hosted by Nicholas and USG Representative Andrew Thompson, was an expression of disappointment and outrage towards the administration. Although both Nicholas and Thompson hold positions at USG, the protest was not sponsored by USG.

“I want it to be understood that the protest and USG are entirely separated,” said Nicholas. “It was something Andrew and I did as concerned students on our own.”

The protest was scheduled from 5:30 – 7 p.m., and ended when the GA started. Around 15 student protesters gathered in front of the KSL Oval, holding signs that condemned Demes and the administration for their failure tor espond in time.

“It is something that Andrew and I… are organizing just to give students the opportunities to voice their frustration in a more informal way, where they can feel like the administration came out and listen to them just how upset they were emotionally and how frustrated they were with the way that the university handled that situation,” said Nicholas.

Both Sheridan and Demes at GA admitted that not sending out the alert earlier was a “bad judgement call,” and both agreed that consistent implementation of changes in the security alert system was the only way to rebuild trust between students and the administration.

On Sunday, as complaints of the university’s lack of response and posts cautioning each other to “stay safe” emerged on social media, an email from the Undergraduate Student Government (USG) address was the first to warn undergraduate students about the shooting. At 5:33 p.m., USG sent out an email suggesting an ongoing manhunt. The email was signed by USG Vice President of Public Relations, Timothy Nicholas.

According to Nicholas, USG executive committee started discussing the situation at around 4:20 p.m. in a group chat. The decision to send the email was made by most of the members from the executive committee after “it became clear towards around 5 o’clock that the administration wasn’t going to send out an email in a timely manner.”

With access to a Listserv that covers all undergraduate students, the USG executive committee decided to inform students of the potential danger created by the suspect in escape. However, Nicholas stressed that “it’s not USG’s responsibility to do that, nor do we wanted to do this.”

He added, “Further more, that [email list] does not touch faculty or staff or the over 5,000 graduate students we have on campus.”

Beside sending out the email, USG members had been in contact with the administration and were lobbying for a security announcement since around 4:30 p.m. Vice President of Student Life Lou Stark first became aware of the situation after receiving a phone call from Ivy Petsinger, the USG vice president of Student Life. Stark then redirected Petsinger to Frank Demes, the executive director of Public Safety, while Stark himself also “contacted police and urged that a message be sent,” according to Stark in an email.

On the other hand, Demes, whose department, the Division of Public Safety, is tasked with sending out security alerts, first received news regarding the shooting at around 4:23 p.m. To confirm the situation, Demes reached out to the City of Cleveland and discussed with his team from CWRU Police.

However, because of the ambiguity of classifying the Sunday incident, Demes and his team did not send out security alert right away. CWRU’s Division of Public Safety complies to the Jeanne Clery Disclosure of Campus Security Policy and Campus Crime Statistics Act (The Clery Act), which requires colleges and universities to disclose crime information on and around their campuses.

The Cleary notifications are sent out either when there is an immediate and present danger on campus or a wide-scale catastrophe that the general public needs to be aware of. However, according to Demes, the shooting incident “didn’t fall into either buckets.”
“This is something that was driven by social media, and was not necessarily fact-based,” Demes continued. “There are some facts involved. but a lot of the following hysteria was not fact based.”