Bell, Book and Candle: there is no magic here 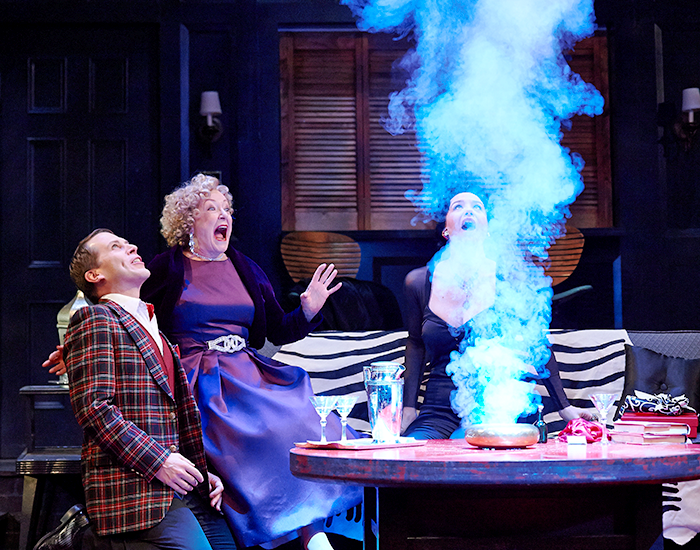 Give me frogs, locusts; anything but this! There is no love potion, spell or unholy power strong enough to compel me to write a favorable review of this two and a half hour plague of monotony, filled with enough empty-headed, meaningless, and downright cheesy dialogue to make an inarticulate monologue by Tommy Wiseau (director of the infamous The Room, who tours the college campuses, staging parts of his film while being pelted with plastic spoons) seem like Shakespeare. At least his inanity was funny! Unfortunately, I cannot say the same for Bell, Book and Candle, which aspires to be a comedy.

The original script was written by John William Van Druten in 1950 as a Broadway play. Supposedly, it was a witty take on contemporary 1950’s society (which everyone from the 60s onward makes witty remarks about). However, from this adaption, I can safely say that there was nothing witty or related to 1950s society, with the exception of two remarks about the reversal of gender roles in proposing of marriage by the two main characters, Gillian Holroyd (played by Georgia Cohen) and Shepherd “Shep” Henderson (played by Eric Martin Brown). For the rest of the play, the majority of the dialogue between these characters involves Shep fawning over Gillian in the most pathetic manner imaginable; with “Darling” or “Dear” inserted after every other word just to remind the audience how idiotic a man sounds when in love. But it’s not his fault, for, according to this story, he had a spell cast on him by Gillian that turned him into a mono-syllabic babbling nutcase who breaks up with his girlfriend over the phone for Gillian and spends the rest of the play without any definable character. I now know why romantic comedies traditionally end when the couple gets together and the courtship stage of the relationship ends. From a literary standpoint, when the characters fall in love (with a few notable exceptions), they cease to be interesting. This is doubly so when one character spends two hours under a love spell that removes his ability to think.

While the relationship of the main characters lacks spark, the other characters unfortunately do not make up for it. Take, for instance, the brother, Nicky (played by Jeremy Webb). This is one character’s script that I would actually like to see. I imagine it said something about him being mysterious, but the result was more like schizophrenic. When you first meet him, you can’t help but wonder, “Is he also here to put the moves on Shep?” But then, he seems to be going after his sister, no wait, then his aunt! All the while, he seems to be suffering from dissociative identity disorder, in which Kermit the frog struggles with an autistic Englishman for command over his accent. At least both personalities seem to agree that they will never wear coat sleeves.

Seriously, Nicky never puts his coat sleeves on. Is the inquisition hiding in there, are they portals to another world where there are resolutions to all the dropped subplots? So many mysteries!

The other two characters, Aunt Queenie (played by Patricia Kilgarriff) and Sidney Redlitch (played by Marc Moritz) serve little other purpose than to periodically pop in and confuse the audience by introducing and then subsequently dropping potential subplots such as Redlitch’s book, “Magic in Mexico” and a demonic mask, which is first mentioned, later appears in Gillian’s apartment, laughs “demonically” and is then smashed without further explanation. The other function that the side characters serve is to “dance” during the transition sequences in little horned goat masks. This gradually degenerates into mostly the older members of the cast dancing in an arthritically “hip” manner, as if we are supposed to be amused that old people can, in fact, dance. I was seriously surprised that there was no mention of Bengay in the entire play, something that would have elevated the brain-dead dialogue considerably.

Finally, the light in the dark of this comedic abyss proved to be the set design, which was quite impressive. The apartment was exquisitely furnished with all manner of exotic specimens that would have looked just as well in an African-enthusiast’s apartment, as that of a witch. On the other hand, the costumes were hit and a miss. Some of Gillian’s outfits helped establish her role as a seductive and exotic witch, something made much more apparent by her transformation into a very housewife-looking character at the end of the play. However, other costumes went about sexiness in all the wrong ways; such as the opening costume, which were comprised of a corset and pants. Nicky’s outfits also garnered a considerable amount of attention, mostly from their flamboyance. Perhaps because the plot was so drab, I was terribly curious as to why, in his final appearance, Nicky ditched his coat-cape look and donned purple pants and a matching beret. Based on the scene, in which he is still smarting from his book not being published, I can only deduce that these were his “depressed” clothes. Lastly, I feel I must say something about Pyewacket, the stuffed cat. Sans real cat, it would have been infinitely better to dispense with Pyewacket’s physical manifestation altogether or, at least, make the cat look a bit less emaciated. As it stands, however, Pyewacket looks like the corpse of a cat that has died of consecutive weeks of malnutrition and neglect.

Bell, Book and Candle is an awful play. No, it is worse. It should never have been staged. Of the infinite number of plays, ranging from great to abysmal, almost any other would have been preferable. If only they were equally bad but shorter, that would make much of the difference. Yet, perhaps, after all, the title of the play is more appropriate than it might seem. To (mis)quote Marlowe, I conclude “Bell, book and candle, candle book and bell, forwards and backwards, damn this play to hell.”