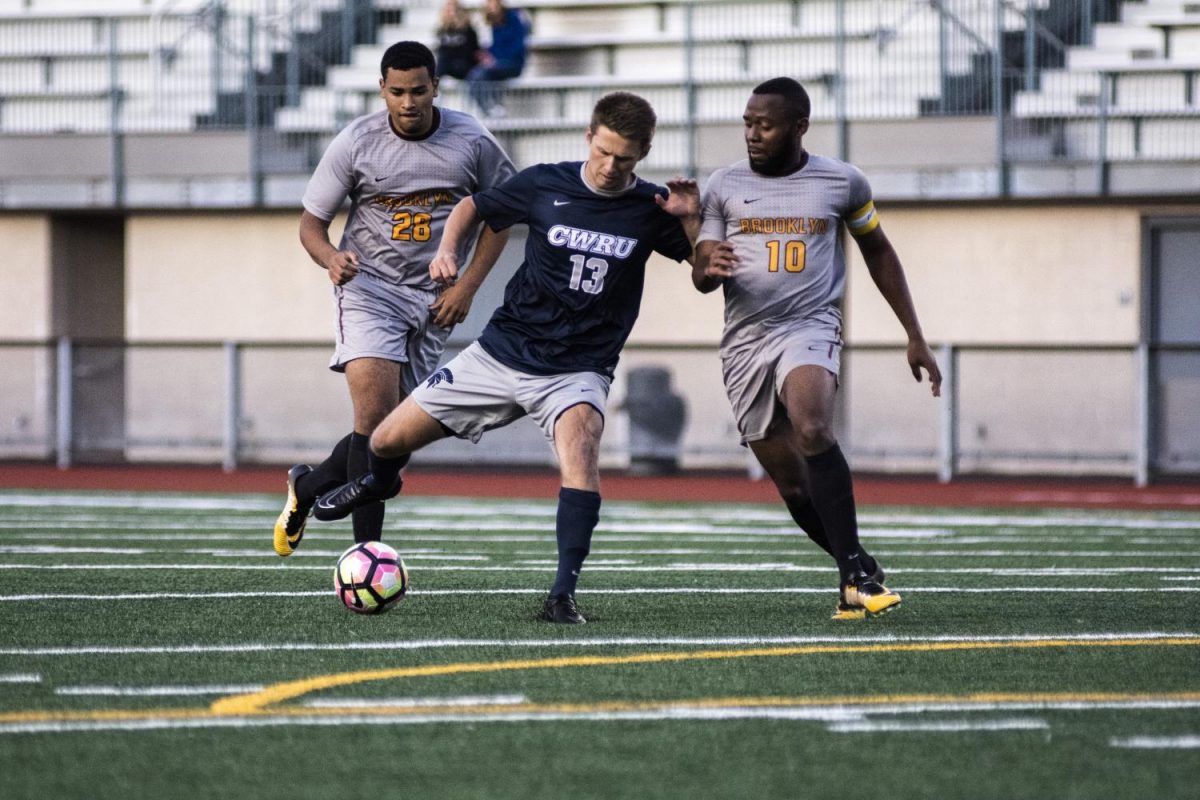 Slipping through two defenders, Michael Balog was in hot pursuit of a goal during a game earlier this season.

DiSanto saw the last of the Spartans for an entire week after its defending team won this past Saturday. The Case Western Reserve University men’s soccer team played its final two matches of its four match home stand this past week, losing the first and winning the second.

First up was No. 7 John Carroll University (JCU) Blue Streaks. JCU is the second ranked team to face the Spartans this season, both of whom came to play on CWRU’s home field. After a close loss to the No. 2 Calvin College Knights, the Spartans’ fans were prepared for an exciting game against the slightly lower ranked Blue Streaks. The first half rewarded them for their attendance.

The game was close, with both teams having strong stretched throughout the entire first half. For the first 36 minutes, though, neither team was able to convert a shot to a goal. That changed when the Blue Streaks scored their lone goal of the game off of a penalty kick.

During the second half, the intensity died down quite a bit. The Spartans only took another four shots throughout the final 45 minutes, and JCU wasn’t much better. In the end, the Blue Streaks improved to 5-0-0 on the season, and CWRU went down to 2-2-1 as the lone goal stood up.

After the loss, the Spartans prepared themselves for another game at home. Much like the last time CWRU lost against a ranked team, they came back hungry for a win. Marietta College came into town, and got off to a quick start with a goal in the first ten minutes of gameplay. Unlike the game against JCU, CWRU came back to take the victory.

Just under three minutes after the first goal, third-year defenseman Alex Besl intercepted a throw from Marietta’s goalkeeper, and dribbled it directly into the penalty area for a score. The quiet crowd immediately erupted into cheers, and the entire Spartan team rushed together to celebrate the score.

Most of the game was close, with both team trading shots. As the crowd began to get quiet again, believing the game would end in a draw, first-year midfielder Maximillian Klemm gained control of the ball and lobbed it upfield. Once again, Besl had control of the ball, and again he was able to kick towards the corner for another goal. Louder than before, the crowds whistled and hollered, their Spartans now up 2-1. No further goals were scored during the game.

The Spartans now sit on a 3-3-1 record following a 1-0 loss to Ohio Wesleyan University on Sept. 20. The team follows with another home game against a ranked team—No. 4 Lycoming College on Sept. 23.