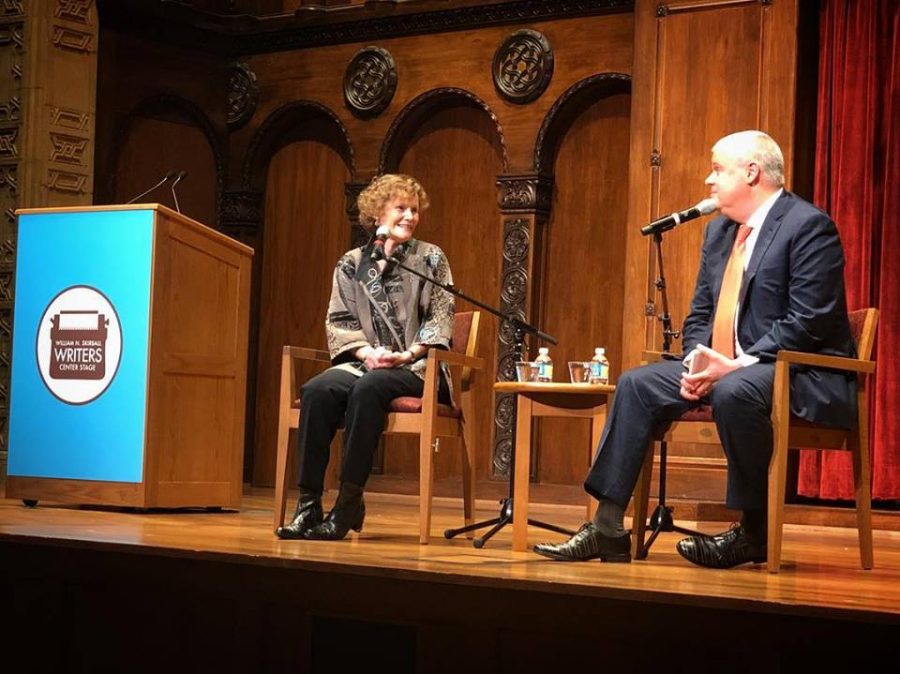 The two came to Cleveland as part of the William N. Skirball Writers Center Stage Series. Their conversation was the highlight of the series’ 15th season, their sixth season since partnering with Case Western Reserve University.

With over 25 books that have been translated into 32 languages and sold over 85 million copies, Blume is one of the most beloved authors of the 20th century. Blume is considered a pioneer in discussing universal but often taboo themes. Her honesty is celebrated in the book, “Everything I Needed to Know About Being a Girl I Learned from Judy Blume,” a collection of experiences of two dozen writers.

The conversation between Blume and Handler flowed smoothly, despite a thirty-year age difference and their vastly different literary themes. Handler is known for the darker themes in his works. In “A Series of Unfortunate Events,” the three child protagonists witness murders and corruption, and they suffer betrayal and tragedy after the death of their parents.

On the other hand, many of Blume’s stories are family-friendly, featuring the mischievous Fudge Hatcher and his shenanigans, including swallowing his older brother’s turtle or calling his kindergarten teacher “Rat Face.”

Still, Blume’s unwavering devotion in discussing taboo topics like menstruation and bullying have caused some of her books to be banned. The two authors discuss censorship and Handler admits he is often told that his books are dark and quips, “they’re not as dark as [Blume’s book] ‘Blubber’.”

“Blubber” is a story about a girl, Linda who is bullied for her weight. However, when her perpetrators turn on Jill, a girl who eventually stands up for Linda, Linda plays along and terrorizers her, actively switching from victim to tormenter.

Blume reasons that “Blubber” appears on banned book lists because she never stated explicitly that bullying is wrong, though her words speak for themselves.

“‘Blubber’ should be banned because Judy Blume has not solved human cruelty,” Handler sarcastically said.

Blume talked about Books & Books at the Studios of Key West, the bookstore she co-founded with Mitchell Kaplan, and her husband, George Cooper.

She revealed that five bookstores in Key West had disappeared and despite Kaplan’s wishes of opening another bookstore, there was not enough funding until The Studios of Key West, a nonprofit organization, agreed to provide cheap rent in a prime location.

Blume’s enthusiasm for the bookstore is evident. “When I’m working at the store, I don’t have to write,” she said. Still, she does get frustrated at times, recounting the times when customers walk in single-mindedly looking for a title and leave without exploring.

“I don’t have a lot of spiritual beliefs, but if you go into a bookstore without buying anything, you are sinning,” Handler said.

Handler’s clever tongue, though evident in his writing, is even more pronounced in person, providing a comedic effect with relatable content. He talked about his own experience growing up with Blume’s books and his lack of sex education.

“One day in middle school, all the girls were called out of class at about noon, while the boys did long division,” said Handler.

He explained that the boys found the girls most willingly to talk and perused the dictionary immediately after, searching for a connection between girls, periods and a lunar (menstrual) cycle.

“Maybe no one will know what sex is if we take the book off the shelf,” said Handler jokingly. Handler himself experimented with this topic in his most recent book “All the Dirty Parts,” which was published in May of last year. The coming-of-age novel details the sex life of a high school boy, Cole, who experiments with girls, boys, pornography and desire.

Blume calls herself a “spontaneous writer” and recalls dinners with her family, comparing notes on how their days went. As her children recounted the events at school, she would talk about her characters.

“Guess what Sally [J. Freedman] did today,” Blume would exclaim at the dinner table.