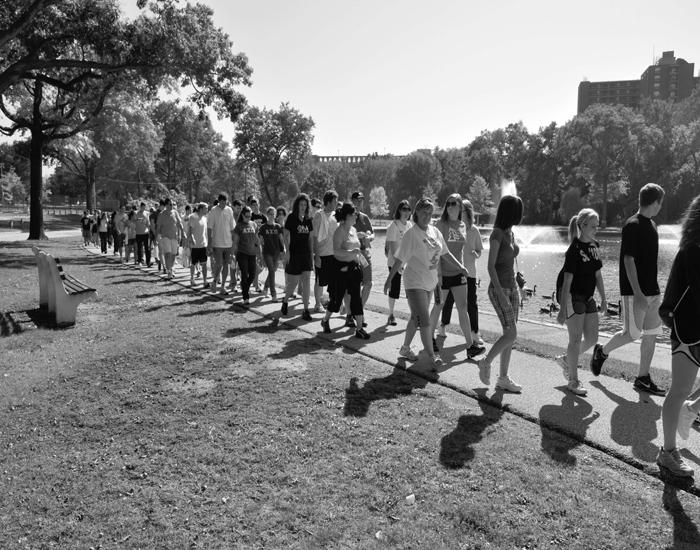 Last Saturday, a group of over 150 people crowded around the Leutner pavilion with same colored t-shirts for the Beta Walkathon. The annual event is organized by the Beta Theta Pi fraternity on campus to heighten awareness of the Diabetes. The event also raises funds for donation to the Diabetes Association of Greater Cleveland (DAGC). This year, the walkathon’s route began at Leutner pavilion, continued through the University Circle area and the Cultural Gardens, and then circled back to end at the Leutner pavilion with a barbeque and music.

Christine Yeh, a sophomore who participated in the event described event as highly successful. “It was an excellent day for the walk to occur, with the awesome weather and great people present. It was a lot of fun with a very laid back atmosphere. The barbecue at the end was a nice touch and it was nice to just get a break from studying to just hang out,” she said.

Robert Armstrong, a Beta Theta Pi member who organized the walkathon, commented that the participation of various members of the CWRU community proved invaluable to the event’s success.

“Having so many members of the campus join us was especially meaningful. Friends and strangers walking, learning about diabetes, having fun, and supporting the DAGC really made the event what it was.” Proceeds from the walkathon added to the over $3500 Beta Theta Pi raised for the DAGC this year.

The walkathon began and ended at Leutner Pavilion. Tickets were $5 a person but groups of 8 or more people received a discount of $3 a person. Arnold said that the purpose of the event was to bring the campus community together to raise awareness for diabetes awareness while, helping a good cause, and honoring the memory of a CWRU graduate. Each participant also received food, Vitamin water, and a T-Shirt.

The Beta walkathon began 25 years ago to honor Steven P. Arnold, a CWRU alumnus and Beta Theta Pi fraternity member who died from complications from the disease. This annual event has since risen over $60,000 for the DAGC over the years. In addition, the walkathon educates participants about diabetes. The educational focus of the walkathon is important because Anrold didn’t develop diabetes at an old age. He died just one year after his graduation and was unaware he had the disease. Though the probability is low, it is still possible for students to be walking around today unaware that they are diabetic.

At this year’s event, besides distributing information there was a DAGC educator available on site to conduct diabetes risk assessments. According to Armstrong, many students and participants took advantage of this.

Yeh, one of the students who underwent a diabetes risk assessment test, described the benefits of having a DAGC educator present. “I really appreciated the lady that was there testing blood sugars. It only took about three minutes, tops, to take the test, but it really showed the [prevalence] of diabetes and the wide range of people that it could affect,” she said.

With another year of successful participation, fraternity members are looking toward the future. “We love sharing this event with the campus and look forward to continuing this great tradition,” said Arnold.