Bianca Smith: From the Spartans to the Red Sox 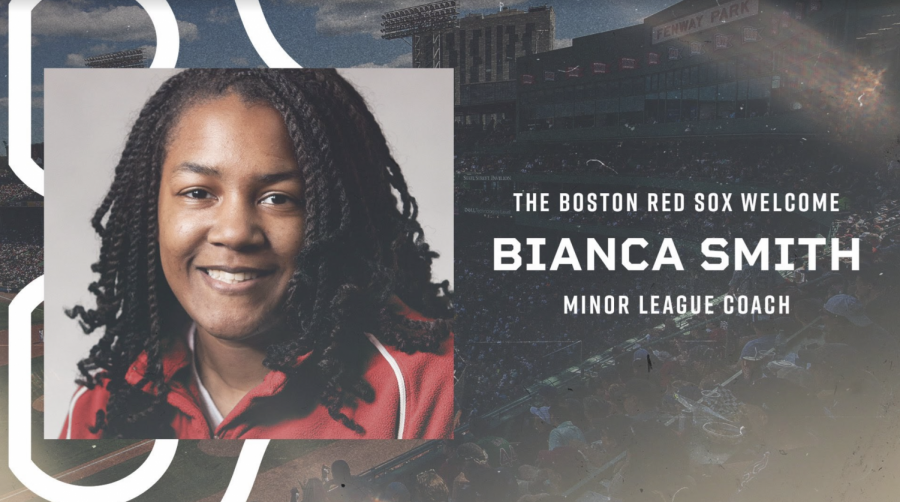 Courtesy of the Boston Red Sox

Bianca Smith attended CWRU to earn her MBA and JD, degrees she feels will help her become a general manager one day.

Most college baseball coaches were hesitant to give Bianca Smith—now the first Black female coach in MLB history—an immediate role in their team’s operations. Case Western Reserve University’s men’s baseball coach Matthew Englander, however, was enthusiastic about Smith’s interest and felt the team could use her help. When Smith came to Cleveland to tour the campus and watch the team play, she and Coach Englander clicked instantly.

From the moment she joined CWRU baseball operations in 2013, Smith was inundated with a slew of responsibilities. She organized fundraisers, started the alumni newsletter, managed travel itineraries and meals for the team (the hardest task, apparently), created the team’s social media accounts and helped work on the field. Her passion for the sport and the job even motivated her to start dabbling in baseball analytics, skills that have transformed into powerful tools over the years.

“I started doing stat[istics] in the first season I was with [CWRU], mainly just to keep myself occupied,” Smith said. “But eventually our coaches also figured out what I was doing, the players figured it out, and they loved it.”

Smith fervently supplemented her CWRU baseball experiences by relentlessly pursuing every opportunity she could get. She served as the assistant general manager for the summer collegiate team, was a teaching assistant for the sports management class for three years, worked in compliance assistance, was a cheerleader and ran the sports business club at the Weatherhead School of Management.

Meanwhile in the classroom, MBA courses helped Smith develop creative thinking skills, which she feels are imperative for successfully managing a business or a team.

Initially, Smith only planned to earn her MBA; however, she loved working the CWRU baseball team so much that she decided to stay an additional two years to complete her law degree. With the ultimate goal of becoming a general manager, the law degree gave Smith the expertise necessary to review player contracts.

Moreover, working towards the business and law degrees required Smith to operate using two completely different mindsets. Smith believes that the ability to quickly switch between these two opposing perspectives in the baseball industry will help her see things from diverse perspectives and keep an open mind when listening to others with unique ideas.

Following her career at CWRU, Smith interned with the Texas Rangers and worked for the MLB commissioner’s office, the University of Dallas and the Cincinnati Reds over the next two years. In 2019, Smith began working for Carroll University as an assistant baseball coach and hitting coordinator.

In late 2020, Smith applied for coaching positions at the collegiate and professional levels all over the country. The Boston Red Sox were never on her radar, but the team reached out to Smith regarding a potential developmental coaching position. Smith jumped at the opportunity. It was one of the first offers and the best offer she received—she accepted the job in early December.

Smith did not expect this hiring to garner much attention. In fact, she was able to keep the news a secret from the public for about a month. In early January, some reports came out about Smith, but they were nothing too major. When the Red Sox tweeted about her hiring, though, the news finally exploded. Smith wasn’t even given a heads up by the team.

“I was in the middle of a travel ball lesson and my phone started blowing up in my pocket. I didn’t have time to check so I had no idea what was going on. Finally, one of the parents comes into the practice and says, ‘Tell me why you popped up on my phone for an MLB notification,’ and I was like ‘What?!’”

After the Red Sox announcement, news articles and social media posts about Smith shattering barriers for BIPOC and women started trending. But for Smith, the focus was never on being the first: it was always on the job.

“[Paving the way is] something I can’t really see, because, yeah I’m the first African American woman to do it, but I’m the seventh woman,” Bianca said. “That’s what I’ve been focusing on. To me, I’m not really the first. My goal was just to coach. That’s why I got excited about the job, not because I’m the first African American one to do it. This is the first time I get to just coach, and this is leading to my dream job to be a manager. […] If this is a big story for other people and [it] inspires them, then that’s just a great benefit on top of what I already have.”

With the Red Sox, Smith relayed, “My role is kind of still being formed. The official title is just minor league coach. They left it open because of the fact there is so much I want to learn.” She plans on improving her skills working with defense, the infield positions and hitting while also getting exposure to pitching, catching and managing.

For most of her career, Smith worked at the Division III level where coaches and staff need to be more creative to develop players without access to advanced technology. Smith, ecstatic about using improved technology and analytics as a Red Sox coach, said, “Knowing that I will have access to those gets me excited and [has me] thinking, ‘What else can I do now that I have those, too?’”

Additionally, Smith is most looking forward to getting to know the players and working with them. Understanding how the players learn, figuring out their working process and learning to read their body language is the most valuable thing to her, not only as a coach, but as a friend as well.

To achieve all her accomplishments thus far, Smith dedicated much of her life to the craft. When asked about what advice she would give to people in a similar position as she once was, Smith emphasized that “Time management and prioritizing are [huge]. Time management is obvious because it’s the only way you’re going to be able to do both [school and sports]. But prioritizing comes into effect because you’re going to have to make sacrifices. I had no social life. I still have no social life. But that’s because I love what I do. And since I knew this was what I wanted to do, I prioritized my job, I prioritized baseball almost over everything else.”

Despite prioritizing her professional growth and achieving remarkable milestones, Smith is still a human being.

“She’s a cat person. She’s one of the least healthy eaters I’ve ever seen in my life,” said Englander, “and she’s also a really good friend, a really good person. I’m very proud of what she’s doing.”

Although she has moved on to greater things as a professional coach, Smith has had a lasting impact on CWRU and continues to stay involved. Former players adore her as a person and a coach. Going above and beyond, Smith has even gotten to know current players because she occasionally visits to watch CWRU baseball games.

“I loved my time at CWRU, not just with the baseball team [but with] all the other activities on campus [as well]. […] CWRU definitely gave me the best opportunity,” said Smith. “The law school knew that I wanted to work in baseball and they were so supportive, they actually let me move one of my final exams my first year. [It’s] hard finding a school and a coach that is that supportive, especially when they knew I had no plans for taking the bar exam. CWRU means a lot to me.”