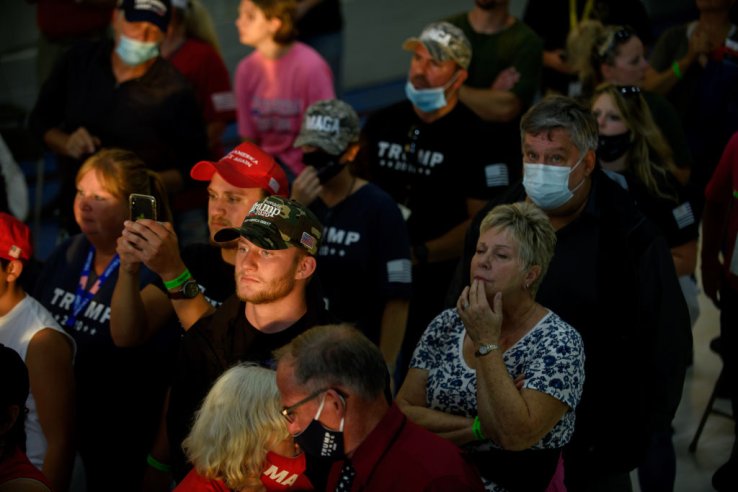 Supporters gather for a speech by Donald Trump. These rallies are known to have strong influences on attendees, promoting a variety of opinions—some dangerous, based on unsubstantiated "facts."

The recent victory of President-elect Joe Biden and Vice President-elect Kamala Harris in the 2020 presidential election has excited millions of Americans. For many, the horror of the past four years is over. We can rest easy now.

While there is certainly good reason to celebrate this momentous feat, that does not mean it is time to become complacent. If we are not careful, Donald Trump could resurface again in 2024, through either another bid for presidency on his part or the vicarious support of someone else’s. Our mission, then, is to prevent that from happening again

In order to make sure that Trump, or someone like him, does not step foot into the White House ever again, we must come to terms with what allowed him to be seated in the highest office of American government in the first place. We need to combat the very source of his ability to maintain control and foster appeal: fear.

Fear has been a significant factor in Trump’s campaigning and governing style. From the moment he announced his bid for the presidency to now, Trump never failed to incite the most deeply held fears of Americans.

So why does Trump continue to stoke fear about immigration?

The answer lies in what American sociologist Barry Glassner calls a “culture of fear.” Essentially, politicians and the media promote fear of certain things—immigrants, religious minorities, opposing political parties—even if the concerns are wholly illegitimate. This rhetoric then produces intense emotional reactions, allowing authority figures to easily consolidate power through the manipulation of those reactions.

The passage of the Patriot Act following the Sept. 11 terrorists attacks illustrates how unsubstantiated fear is translated into policy. The act notoriously allowed the National Security Agency to surveil the phones of American citizens without warrants, in the name of security.

Trump exacerbates and fuels our fearful mindsets in many ways. In August, he said that “total anarchy, madness and chaos” would be inevitable in the event of a Biden-Harris victory. He amplified fears of suburbs becoming hotbeds of crime in a series of tweets: “Violence is coming.” During the Republican National Convention, Trump emphatically proclaimed that “no one will be safe in Biden’s America.” In all of these instances, Trump is constantly painting a picture of an America in turmoil—one that is under attack from dark forces on all sides. He is creating a politics of pessimism, wanting people to act on deeply ingrained fears as opposed to more positive sentiments. In this narrative, Trump is then able to present himself as the country’s savior; he alone can “make America great again.”

That is his ultimate goal: get people to discard reason, act on fear and put their undying trust into Trump and everything he does. “In reality, they’re not after me. They’re after you. I’m just in the way,” as a tweet of his from December 2019 reads. He wants to be seen as the only viable option.

Fear is an extreme emotion, and can it cause equally extreme reactions. The 2019 El Paso shooter, as an example, cited anti-immigration concerns and conspiracy theories as the primary reason for his actions. Cesar Sayoc, the man who mailed pipe bombs to prominent Democratic officials in 2018, was enraged by what he perceived to be nationwide attacks against Trump voters.

This in no way excuses their actions, but rather just emphasizes the impact violent rhetoric and the instigation of fear have when they originate from high-level political offices. All it takes to turn fear into bigotry is one person with the gall to tell you anything with no regard for the truth.

It also should be noted that the politics of fear is not unique to Trump, nor is the Democratic Party blameless. Hillary Clinton’s shameful comment in 2016 that Trump supporters are in a “basket of deplorables” understandably incited fear and anger amongst Republicans. Moreover, the mistaken belief that a vote for Trump is irredeemable, or that they belong to the uneducated class living in flyover country only further exacerbates these feelings. Trump voters are not a monolith. Many of them have genuine policy concerns and see Trump as a way to be heard. He feeds off the false belief that Democrats and progressives are attempting to destroy America and attack his supporters; generalizations only help to confirm these fears.

So what is to be done?

Progressive agendas need to find a way to fight the rhetoric that Trump so liberally uses. Democrats also need to stray from condescending moral elitism. If a Biden-Harris administration is to be successful, then it needs to fight fear with its opposite: hope.

Trump wants you to be afraid, and turn to his own brand of political nihilism. Instead of giving people a reason to be afraid, there needs to be a renewal of hope and faith in public institutions. Americans need to know that, although there is much to be concerned about, everything can get better so long as we fight for it—and we must fight for the good kind of change.

That is the primary lesson we must take away from these past four years: the fight for a better future is arduous and difficult, but we must have faith that it can get better. So let’s keep the faith.