Volleyball wins four after suffering first loss of the season 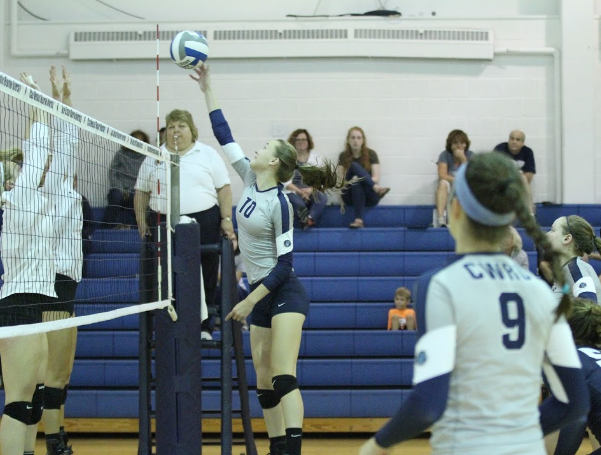 A nail-biting match brought the bitter taste of defeat into the Spartans’ mouths, and they responded with unmatched ferocity. The Case Western Reserve University volleyball team fought through a tough match against the Mount Union University Purple Raiders on Sept. 14, and they came away with their first loss of the season. But the team remained resilient in the face of defeat and pulled off an impressive four wins over the following weekend.

The fateful match took place in Alliance, Ohio. The opponents, dressed in purple, started strong at the beginning of the match. They took the first set by a margin of seven, leaving the Spartans puzzled with how to play moving forward. The next set was closer, but not by enough, and the Purple Raiders took set number two.

This was when CWRU dug in their feet and got their focus, leading to a strong 25-19 set. With the match on the line, the Spartans looked as dominant as ever as they strolled to a devastating 25-15 win in set number four, tying things up at two per team.

Suddenly, the Purple Raiders were against the ropes and the Spartans had the momentum on their side. Even in the fifth set, CWRU was up 7-5 and looked like they had the match under control. But that is when Mount Union’s switch flipped, and they went on to take 10 of the next 12 points, winning the match in a stunning change in momentum.

When asked about the loss, Head Coach Karen Farrell said, “The Mount Union loss demonstrated the reason our players need to maintain a more consistent focus and level of execution prior to set five of our matches, as anything can happen in the shorter set. In that last set we struggled in one rotation and couldn’t recover quickly enough.”

The sting of losing was none too pleasant for the Spartans, and the team decided not to allow themselves to remain down. They went on to the Bishop Invitational last Friday, Sept. 16,  at Ohio Wesleyan University to take on Adrian College, winning the match 3-2. Later that same day, the team again took another match 3-2 against Denison University. In both matches, first-year outside hitter Brianna Lemon was the spark that ignited the team, leading the squad in kills and helping to keep the group together.

The next day, CWRU faced Defiance College, a team that the Spartans had defeated 3-1 just a week before at the Marcia French Tournament. Farrell warns that “playing a team a second time during a season is always a little anxiety producing because there tends to be a little emotional let down for the winning team and a second chance mentality for the losing squad.”

While the match was closer, the Spartans still pulled off a 3-2 victory thanks to a stellar 15-10 final set. Lemmon again led the team in kills, while second-year setter Shannon Carroll did her job to the best of her ability and racked up a total of 34 assists. The Spartans’ defense more than doubled their opponents’ dig totals, winning that battle 100-49. CWRU was led by second-year libero Karina Bondelid with 25 digs—over half of the other team’s total.

To complete the weekend, CWRU finally broke their streak and had an easy win.

The Spartans squared off against Grove City College and did not let up the whole way through, winning three sets in a row to take the match 3-0. The first set was an astounding 25-11 win. Although the second set was closer at 25-19, the third set went 25-16 to seal the deal for CWRU. Lemmon and Bondelid again led in kills and digs, respectively.

Although this squad received its first loss this week, it is the response that is noteworthy. In the face of defeat, the team rallied and was able to pull off a weekend of four straight victories, capping it off with a dominant 3-0 win. The team closes out the month against Heidelberg University on Saturday, Sept. 24, after suffering their second loss of the season to Baldwin Wallace University on Wednesday, dropping their record to 12-2. The promise being shown by this group of women continues to be impressive, especially now that we know how they respond to adversity.