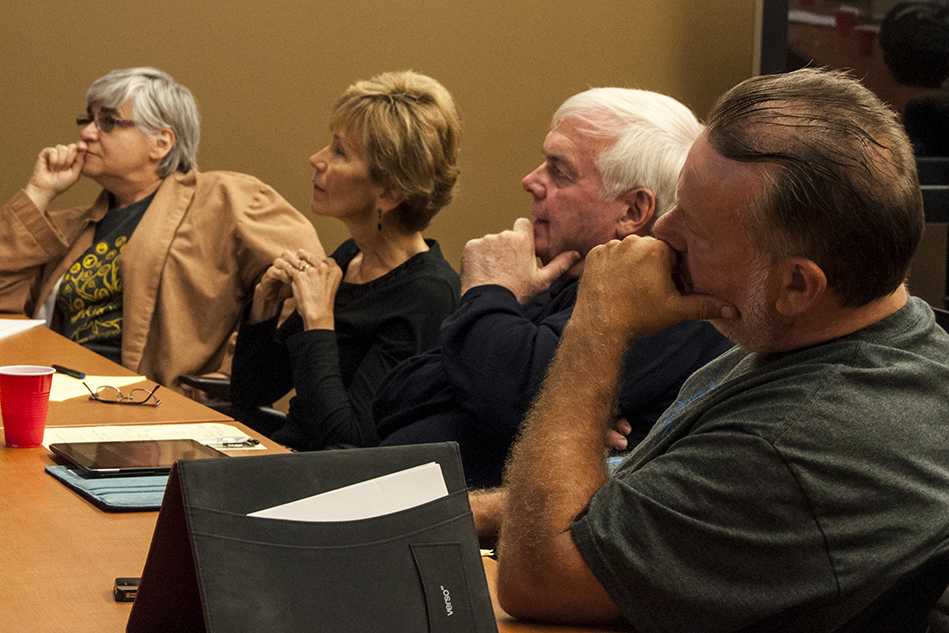 Business advisers including Sue Marrone, a technical liason for APB and Associates, a business management firm listen to presentations from prospective student entrepeneurs.

And that’s not just in a figurative sense. The mechanical, aerospace and computer engineering triple major is the founder of Suborbital Launch Services (SOLS), an upstart aerospace company whose goal is to “do for space exploration what personal computers did for computing” and offer a more accessible and technologically simpler alternative to sending items like scientific instrumentation into space. SOLS is hoping to be commercial by 2017 and is currently investigating various techniques for rockets, flight computers and payload modules.

Srirangarajan’s company was one of several who participated in last weekend’s Blackstone LaunchPad Startup Weekend, an event designed to offer prospective entrepreneurs advice and real world experience. Space travel was not the only idea tossed around, as other student companies ranged from a zipper repair solution from undergraduate students Max Cormier and Tesia Thomas and an undergraduate and graduate student team made up of James Roberts, Shawn Li, Abby Xian and Adam Lerner working to create a tactile sensing glove.

The weekend began Friday Aug. 30 with participants pitching their ideas and forming teams. By Saturday, teams engaged in open training sessions, received mentoring from experts and worked with their teams to develop their ideas. Work continued through Sunday when the teams pitched their concepts to judges and competed for $500 in cash prizes.

The judges for the event included Melanie and Toby Maloney, who were among the original investors of Mental Floss, the popular magazine and novelty item company. Sue Marrone, designer of a visual organization program called Mosaic, and a technical liaison for APB and Associates, a project management company, also served as a judge, and lent her advice during the mentoring process.

Marrone lauded the efforts of Blackstone since it exposes students to the real world difficulties associated with creating a new business while still celebrating the triumphs.

“[The weekend] is an eye-opening experience since you find out how difficult it is to launch a business,” Marrone noted. “If you want to invent something new, this is what you want to have to address or you will go bankrupt.”

Rick Pollack, the founder of MakerGear, a 3D printing manufacturing company, also served as a mentor during the weekend. He emphasized that students should make sure they go into business with others they trust, and that just as much focus should be paid to building a cohesive team as to the company’s product.

Director of Blackstone LaunchPad Bob Sopko says that one of the event’s goals was to expose technological innovators to entrepreneurship.
“We wanted science and engineering folks to understand the marketplace and customers,” Sopko said. “We don’t want them to continue developing things in isolation. We want them to build something from a customer oriented perspective.”

The LaunchPad initiative is funded by a three-year, $3.2 million commitment from the Blackstone Charitable Foundation in partnership with the Burton D. Morgan Foundation. Case Western Reserve joined four other Northeast Ohio institutions in the Blackstone LaunchPad network, which aims to foster entrepreneurship through both an inter- and intra-campus network.

“We’re introducing people across Euclid Avenue” Sopko said. “It doesn’t need to be the great divide. The School of Engineering should be talking to [the] Weatherhead [School of Management] and viceversa.”