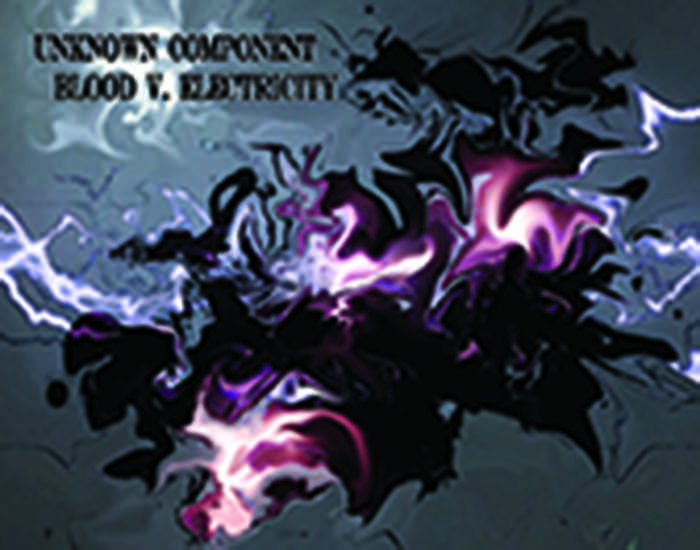 Until I heard about its latest album, Blood v. Electricity, Unknown Component was completely foreign to me.

Even odder still, what I thought was a full rock band turned out to be a music project of one man, Keith Lynch, based out of Iowa. Lynch sings and plays every instrument in every single one of his songs.

Needless to say, his live shows are probably not much fun to watch.

The album rolls off with “Intuition,” a very techno-influenced tune beginning with simple guitar riffing and synthesized sounds. Vocals repeat in a soft echo after each verse, keeping a consistently faraway feel.

More and more instruments enter, with a smooth voice echoing “and I’ll keep listening to you / I’ll hear you ever more” against the cascading musical waterfall. The music layers but then simmers back down into quiet ripples of guitar and violin.

This rise and fall is very present in all of Unknown Component’s songs, but the style becomes less techno-based further into the album. “Nowhere is Alone” brings in an indie-styled clapping and choir singing, and rock beats die down into a hopping violin melody in “Gypsies of the Apocalypse.”

The first song to feel out of place was “Pendulum,” in which Lynch’s smooth voice clashes with the grungier guitar playing loudly over swinging crescendos and decrescendos. It would have been more at home with scratchy rock and roll vocals.

Lynch’s voice actually never seems to change throughout the entire album. Consistency is good, but his smooth echoed voice is borderline repetitive, especially in track five, “Sensory Deprivation,” where the faraway chords and voice combination feel like a simple variation of the first track.

However, immediately after this slight disappointment, my favorite song on the album, “Moral Vultures,” started up. The funky drumbeat, coupled with an upbeat vocal, was very fun. I still noticed the echoes of which Lynch is clearly fond, but he did break away from the typical semi-sad faraway songs I’d heard exclusively before this.

His peppier beat continues into “For All Intents and Purposes,” but transforms into a Wild-West feel with “Dust & the Shadows,” a Johnny Cash-esque song with a steady galloping drumbeat, similar to Cash’s famous “I Walk the Line.” Even this song has its dreary parts, though.

A strange spacey song, “Painting the Weather,” comes up next, bringing up crazy images of rocket ships and extraterrestrial life. But then a slow guitar and sad singing come in, bringing down my excitement for a potentially bizarre piece.

“The Invisible Line,” a gangster-like song, reminded me of Gorillaz, but the smooth, cool bass part is so quiet I could barely pick it up. If this was louder and his singing was more aggressive, the song would have been completed perfectly.

A guitar beat swings in the last song, “Through the Surface,” but the dramatic synthesizer and soft drums in the background do not add much to the melody. If this song were acoustic, it would have been a perfect fit for Lynch’s smooth, soulful voice but his random splashes of techno do nothing to enhance it.

I will admit that Unknown Component touched on many different musical genres, but none seemed fulfilling to me. I wanted to hear his take on the genre, not a transformation of the genre to fit his style.