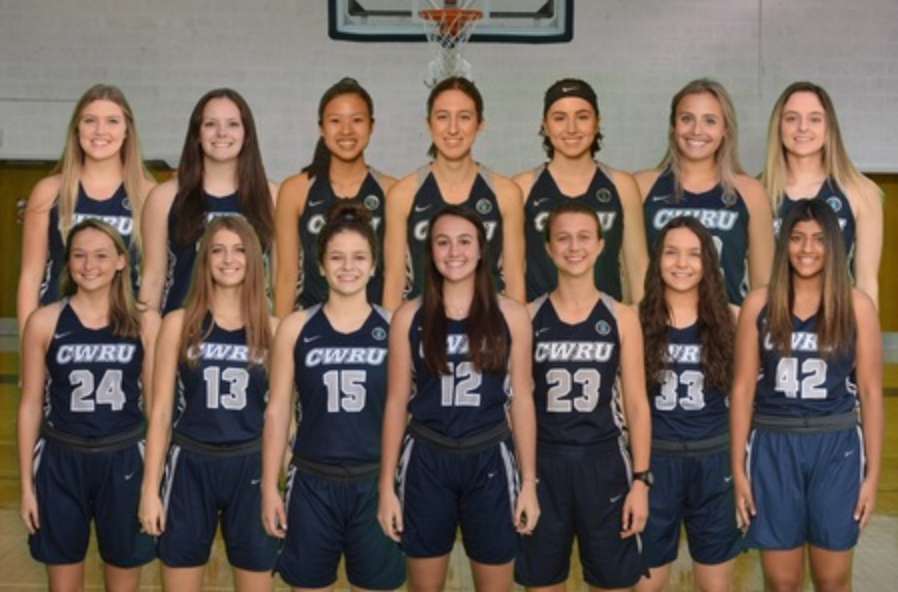 After splitting into Blue Team and White Team, the Blue Team won by a score of 57-32, outshooting and outdefending the other team from the second quarter onwards.

Just as the men’s team held a Blue-White scrimmage, the Case Western Reserve University women’s basketball team hosted a scrimmage of their own Friday, April 16. The event was held inside Adelbert Gymnasium. Though no spectators were allowed, the game was live streamed on the Athletic Department’s website and a recording can be found here.

The game tipped-off at 6 p.m. The first few possessions were littered with overthrown passes, turnovers and lots of missed shots, all of which can be attributed to rust.

About three minutes into the first quarter, Mills was fouled by Blue Team’s Glimpse on a layup to the left side of the basket. Mills swished both free throws, scoring the first points of the scrimmage and putting White Team up 2-0.

A few possessions later, Glimpse redeemed herself from the early foul. Coming down the right-side of the court, Glimpse made a layup off a baseline inbounds play, putting Blue Team on the board for the first time and making the score 6-2.

White Team answered right back with a left corner three pointer from Poulton off of a slick one-handed baseline pass from Gross, increasing the lead to 9-2.

Halfway through the first quarter, the rust started to wear off and the audience could see flashes of brilliant offense with drive-and-kick passing deployed by both teams. Although there were still many missed shots, it was clear that team chemistry had developed over the season. The team was just now getting into a rhythm.

On a fast break, Lawrence received a pass from Gill and drove to the basket for a quick layup, which made the score 9-4. White Team, however, closed out the first quarter strong. Mitchell made a floater from the key off an inbound play and then followed up with a free throw. The score stood at 12-4 at the conclusion of the first quarter.

Blue Team started a comeback campaign right from the beginning of the second quarter. Ceseretti grabbed an offensive rebound and got fouled going back up with it. Making both free throws, she started bridging the gap 12-6. A couple possessions later, Terry scored a layup and cut the lead down, 12-8.

One of the best displays of team basketball came with roughly five minutes left in the second quarter. Glimpse got the ball at the right low block, passed it to Niles-Sterger in the corner who then threw it to Ceseretti on the left wing. Lawrence then flashed to the left elbow, received the ball from Ceseretti and knocked down the jumper, cutting the lead to 12-10. Consistent ball movement gave them lots of open shots which kept the White Team on their toes defensively.

On the very next possession, Glimpse got the rebound and went coast-to-coast for a score-tying layup. With that, Blue Team officially overcame the eight-point deficit from the first quarter.

Though both teams picked up their defensive intensity in the final few minutes, Blue Team began taking advantage of White Team’s defensive lapses and missed shots. With a couple three-pointers from Terry and Glimpse, a mid-range jumper from Lawrence and some free throws, Blue Team ended the first half with a 23-17 lead.

Though White Team attempted to make a push in the second half, a comeback never materialized. Six minutes into the third quarter, Terry displayed some trickery by pump-faking underneath the basket, causing two defenders to collide while Terry got the easy layup. After Poulton drained a three from the left off an assist from Mitchell, Niles-Sterger curled to the left corner for a three of her own, extending Blue Team’s lead to 36-22.

Blue Team maintained their defensive prowess, rained in three-pointers and sunk fast-break layups and never looked back. After staving off a couple runs from White Team, Blue Team eventually won the game 57-32.

The players were overjoyed to finally play a game after more than a year.

“It felt so good to be back on the court with my teammates in a competitive atmosphere,” third-year Ceseretti said of the scrimmage. “Both teams did well and everyone had a good time.”

First-year Terry echoed similar feelings, elaborating that the game “was a good representation of all the work this team has put in since the fall.”

For first-years, the transition to college basketball has been interesting during the pandemic. Coach Jennifer Reimer, however, was impressed by how the team’s first-years have handled it.

“Our first-years are talented and hard-working. I believe they have developed their skills this year and will only get better as we enter into next season. I love their positive attitude. [They] are competitors and we are going to benefit from this opportunity we’ve had this season,” said Reimer.

Although Terry played quite well in the scrimmage, she is still working on getting used to the pace of Division III basketball.

“The adjustment to college play has been a learning experience,” Terry reflected. “The pace is much faster and you really have to value every possession. Personally, I have really had to work on my decision-making on the floor to make sure I am getting my teammates the best shot I can.”

The coaches plan to use the rest of the season to allow players to “continue to gel together” and learn how to play to each other’s strengths.

“We are far from our full potential but we are definitely working in the right direction,” Terry added. “We are very young, so throughout the fall and spring we have been focusing on team chemistry and the basics of our offense and defense. The silver lining of this season is that it’s given us the chance to create a solid foundation that we will build off of.”

The players have embraced this year’s challenges and are excited to see the fruits of their labor when they play against other schools in the University Athletic Association (UAA) conference.

“No one in the [UAA] knows who we are, which gives us an opportunity to come out strong next year and make a statement about who we are as a team,” Ceseretti stated. “I am really looking forward to next season and I think we will have a great season.”

For the time being, the team appreciates the chance to play and hopes to take advantage of what this year had to offer.

“We’re most grateful that every member of our team is healthy and has grown as a result of the challenges put in front of us this year,” Reimer said. “I have been beyond impressed with the way our team has taken on the challenges and the frustration of this season and made it positive. I’ve never been more proud of a group that I’ve coached.”