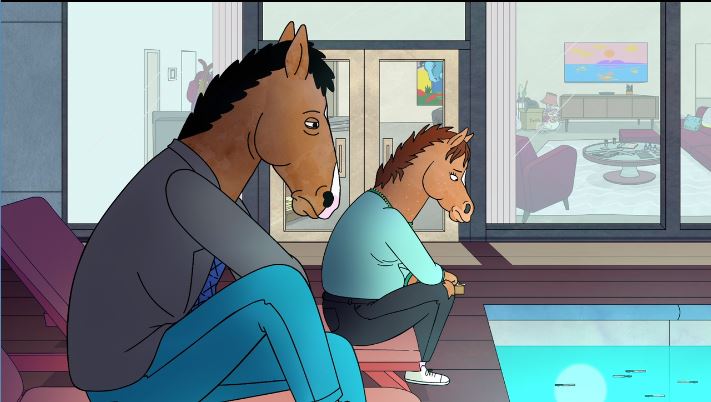 Most people would agree that I’m a complete and utter emotional wreck. My girlfriend can attest to the fact that if I’m seeing a play, I’ll more than likely be in tears by the intermission. Unfortunately, I can count on one hand the number of TV shows that have had a significant emotional impact on me. Netflix’s “BoJack Horseman” is one of those shows. Despite focusing on a group of Hollywoo (not Hollywood) elites, the show’s writing and direction make it incredibly relatable. Even with its slow start, the show has grown from season to season to become one of the best shows in recent years, managing to tackle love, relationships, substance abuse and death. Despite the high bar set by the show’s previous successes, the new season exceeded all expectations.

Season four of ‘BoJack Horseman” premiered on Sept. 8 and sees BoJack coming off his crushing Oscars defeat. This season takes a hard look at the decay of family; BoJack dealing with the death of his co-star and surrogate daughter, Sarah Lynn, Princess Carolyn’s miscarriages and her break-up with Ralph and Mr. Peanutbutter’s strained marriage.

Throughout the season, we follow BoJack and his relationships with his dementia-ridden mother, Beatrice, and his supposed daughter, Hollyhock. In previous seasons, we’ve only seen Beatrice’s horrible treatment of young BoJack, but now we begin to see her unstable light. While this insight doesn’t forgive Beatrice for the way she treated her son, it shows us that she’s still human and a product of her screwed-up upbringing. The storyline with Hollyhock makes up another significant portion of the season for BoJack. In the third episode, Hollyhock, a young horse, gets a DNA test to prove that BoJack is her father. When it comes out positive, BoJack begins trying to take a fatherly role in her life, even going so far as to lie to Hollyhock to keep her in Hollywoo longer. The climax of the story comes when, in the final episodes, we finally learn about Hollyhock’s origins.

Even in an incredibly strong season, there were certainly a few episodes that stood out.

One was my absolute favorite episode of the season, and possibly of the entire series, episode 11, “Time’s Arrow.” The audience learns more about Beatrice’s past, but rather than using flashbacks, this episode is told almost entirely from Beatrice’s point of view, as a collection of visions. We see her memories melding together, and often almost glitching, with letters being mixed around, objects phasing in and out of existence and more. I don’t want to say anything more about this episode, since I really believe it should be experienced for yourself.

Overall, this season of “BoJack Horseman” takes everything that was great about the previous seasons and improves upon it. For those who mainly watch for the comedy, there are animal puns and clever jokes in spades. For those who watch for the emotional depth and nuance that can often be lost in adult cartoons, it will have you in tears, just like I was.

Even while taking some of the focus away from BoJack himself, this season still has incredible depth. If there were one thing that I would criticize, I would say that the subplot with Diane and Mr. Peanutbutter could have been better. It relies too heavily on the marital tension developed from the first three seasons, while doing little to progress it. The conflict, while fun, comes off as forced and unnatural.

However, I feel as though the rest of the season more than makes up for this shortcoming.