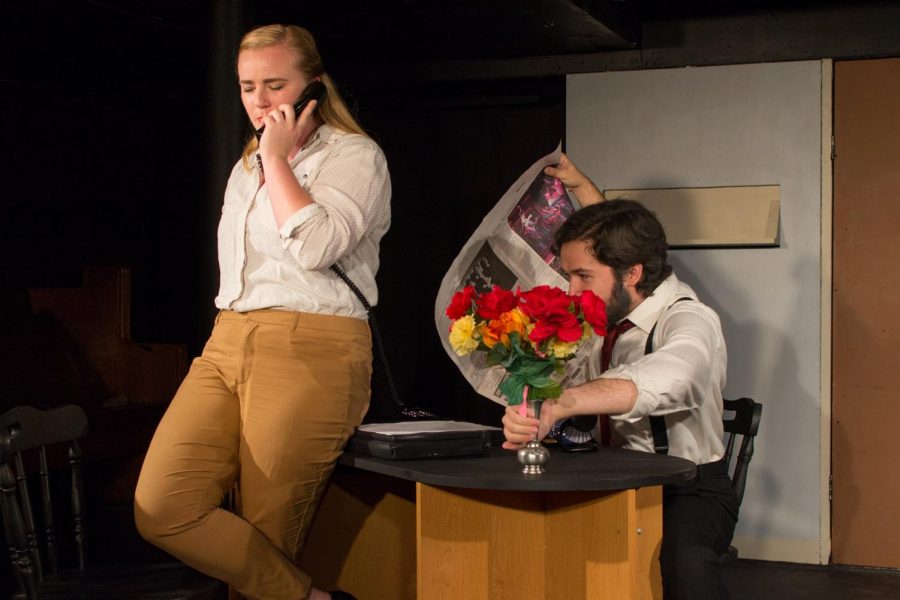 “The boy sees the girl and falls in love. They begin a tentative relationship一but what happens when the girl ultimately says ‘no?’”

Players’ Theater Group tackled this story in their newest show, “Boy Gets Girl,” on Oct 13 and 14 in the Eldred Black Box, where audiences saw an intimate view into the wild “relationship” of Tony and Theresa.

As this was fourth-year student Laura Mosteller’s first time directing, this show was her way of determining her directing style, but it didn’t come without issues.

“I think the largest challenge I faced was keeping the show unified in my concept,” she recalled. “I conceived a sitcom world that fades to reality and wanted to make sure I was serving the text and weighty material with integrity.”

Rehearsals began Sept. 16, and were two to three hours, five days a week. However, a lot more went into it than actors simply attending rehearsal; every aspect of the show was planned and predetermined.

Second-year student and stage manager Ellie Fitzpatrick discussed the purpose of the lighting and sound.

“The lights in the first act and first part of the second act were meant to be very bright, like on a sitcom set,” said Fitzpatrick. “Our transitions were very purposefully lit to be seen by audiences, yet again to portray the feeling of a set of a sitcom… A big part of the sound design were the laugh tracks which were meant to help the audience understand that they were on the set of a sitcom … the songs in between were also very purposeful, they were exclusively upbeat pop songs that had creepy lyrics or inappropriate lyrics.”

The cast did an incredible job with their characters and with the performance as a whole. First-year student Bradley Schneider, who played Tony, Theresa’s stalker and tormentor, recalled his preparation involved “[a] really close reading [of] the text to figure out how much he already knew and what the subtext of each line was … there was a lot of give and take with how creepy of a caress or an arm tap or hand-hold there really was. Playing the villain is a lot of fun even though the character himself doesn’t think he is the villain.”

First-year student Devin Knott, who played Mercer, Theresa’s support and friend, enjoyed his character and what he stood for.

This play brings sexual harassment to the forefront and shows how a society can so easily write off predatory behavior as something of romance as seen in movies.

“This play really spoke to me as a dark feminist piece about what happens to a strong person because of the broken culture we live in…almost every woman I know has experienced some form of sexual harassment or assault and this play shoves this statistic in your face,” Mosteller said.

Second-year student Katrina Claflin, who played Theresa一the lead character and victim of Tony’s advances一discussed how easy it was to connect with Theresa as a woman.

“Theresa describes how she had been catcalled since she was 12, and I immediately understood because it’s happened to me since I was 10,” said Claflin.