“Boys State” is the movie for an election year, the documentarians and subjects discuss 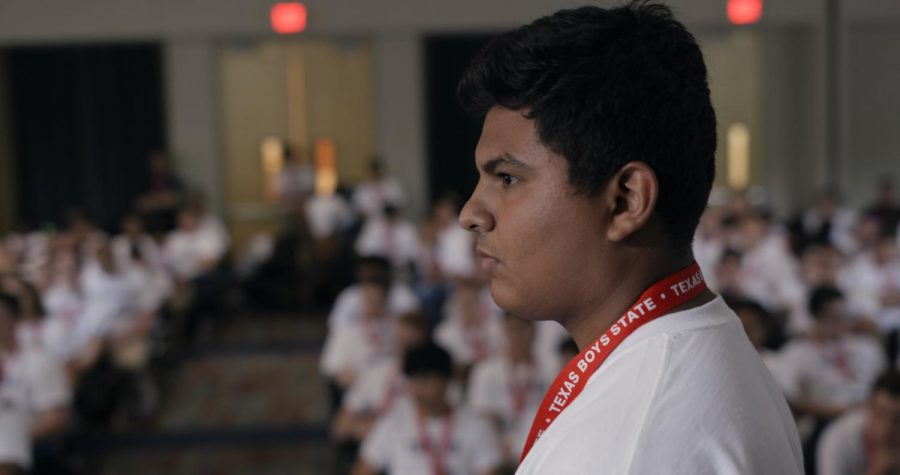 Courtesy of A24 and Apple

American politics has become markedly more dirty, discivil and polarized in the past few decades. While it is easy to write this decline off as just the work of greedy, squabbling politicians, “Boys State” puts a mirror to our culture, possibly revealing exactly what is wrong with our political discourse.

The documentary portrays the 2018 edition of Texas Boys State, a chapter of the American Legion-run program where high school seniors act out a microcosm of american politics. The students are randomly assigned into two random political parties—“Federalist” or “Nationalist”—and then gather to form a mock state government. The opening credits immediately make you want to pay attention to all the subjects of the film, showing notable alumni of the program, including Bill Clinton, Dick Cheney and Cory Booker. These images pose the question: are the kids we are watching truly the future of America?

The film has four main subjects: Steven Garza, the mild-mannered child of illegal immigrants who is running for governor with the Nationalist Party; Ben Feinstein, the Reagan-loving, conniving chair of the Federalist Party; Rene Otero, the razor-tongued chair of the Nationalist Party (as well one of the only Black people present at the mostly white summer camp) and Robert MacDougall, a charmer who also attempts to run for governor. It is with these young men that the documentary begins to take shape.

Ranging from Steven’s transformation from a soft-spoken young man into an earth-shattering political speaker; to Ben deliberately spreading misinformation about his opposition in order to sway the election; to René finding that there is a racist meme campaign against him; to Robert openly admitting that he lied about his positions for more votes because “that’s politics,” there are moments in this film that will remain in the minds of all viewers while also making them apprehensive for the future of this country. The film questions whether nature or nurture has led to the current state of American politics as well as whether decency or outrageousness will ultimately win the day. These questions are as timely as ever, making this documentary the movie of the moment and the ultimate watch for this election season.

I sat down with the filmmakers, Jesse Moss and Amanda McBaine, as well as subjects Steven, Ben and Robert, two years after their experience to reflect back on their time.

“I saw a rough cut of the film in Aug. 2019, so a few months before it was released, it was done enough to see how compelling it is. I was watching it with one of my best friends, and we expected a ‘Ben Feinstein victory reel’ because that’s what I remember,” Ben said, “I saw the event from three other perspectives, and seeing how my actions unfolded on screen allowed me to reflect a lot. The most valuable experience of the doc was being able to revisit your past with nostalgia glasses removed… This has been a great opportunity to improve my politics and views of others.”

Most politicians don’t get the opportunity to look at their mindset two years later and see they were wrong, with Robert remarking upon thinking back that he “went into this experience with a narrow and quite cynical––to be honest––mindset. I had the expectation that that room would be a very red, one-minded place. I made the decision to run based on that expectation.”

But for Steven, the greatest thing he got out of the experience seemed to be a sense of hope, saying, “It’s all about appealing to people’s better selves, and I think our generation is not too focused on party affiliation but rather on what policies are being proposed. Can we put aside labels and sit down with some sort of agreement? I think I was able to do it at Boys State and I wish more politicians around the country would sit down with their opposition and go home knowing they did something good for the American people.”

Jesse Moss said similarly about Steven’s experience, noting that “[Boys State] is still a majority white, conservative group, so Steven was an underdog in a lot of ways.” He added, “One of the great surprises, great joys, and great reminders are that even in that space, he went that far. He inspired people for their better selves and loved what we experience. It reminded us of what this country is capable of when voices are heard.”

Ultimately whether America will truly reach that point when all voices are heard remains to be seen, and with the election shortly coming up, that question is as crucial as ever. Vote.

BOYS STATE is an Apple Original Films and A24 Release. Now available to stream on Apple TV+.