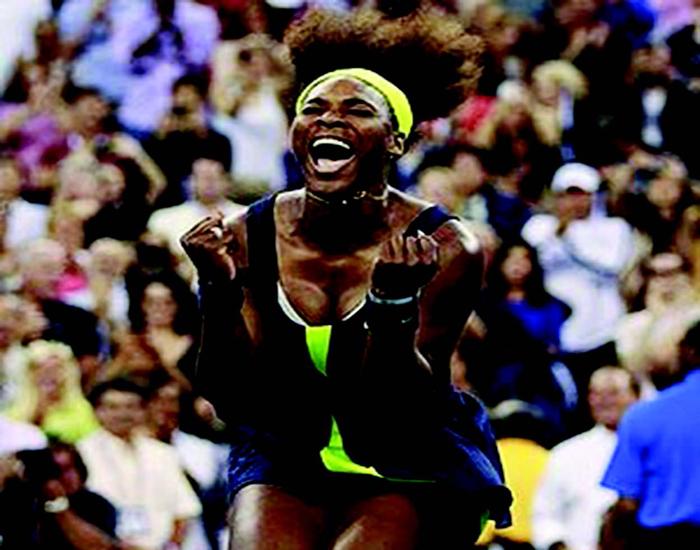 Heather O'Keeffe, What a Girl Wants

After the longest final in over 20 years, on Sept. 9 Serena Williams won her 15th major tennis open. However, most people probably didn’t see this, since a meager 3.4 percent of American households tuned in to watch the final of the Women’s U.S. Open tennis tournament.

The Williams v. Victoria Azarenka matchup was the first women’s final since 1995 to go to three sets. Azarenka was serving for the match, but Williams never backed down, clawing her way to victory.

Williams erupted with excitement after winning the final point. Overcome with joy, she jumped up and down. An image of this scene made the front page of the USA Today sports section, but the message is a little convoluted.

The focal point of the image is without a doubt Williams’s cleavage.

This is distasteful and unprofessional. USA Today effectively made the article less about Williams’s victory and more about her body. Williams is an athlete and deserves to be respected as one – not as a well-endowed woman who just happens to swing a tennis racket really well.

This infuriates me so much because female athletes have always been my heroes, ever since Mia Hamm and the women of the U.S. National Soccer Team of the 90s took the stage as pioneers in female athletics and paved the way for thousands of little girls eager to play sports.

They fought more than their fair share of adversity just to be noticed for their skill, appreciated for their athleticism, and respected for their sportsmanship. They forged the way for females in every sense imaginable.

The Williams photo is not the most recent example of sexism. On Sept. 16 the U.S.A. women’s soccer team defeated Australia 6-2. It played brilliantly, continuing to show its prowess and dominance as 2012 Olympic champions and the number one team in the world.

The women of the national team played with ferocity, grace, skill, and dignity. They were both crafty and aggressive – a formidable opponent against whom Australia never had a chance.

So it angered me a little bit when sexist jokes were made about these female athletes. Maybe I overreacted, but it’s not funny when someone says women’s soccer is not a sport.

It was equally frustrating and sexist when someone reacted to Sydney LaRoux’s magnificent diving header with, “Wow, that’s sexy.” When a male athlete scores a goal of such caliber, I don’t think “Mmm, sexy,” I think, “Wow, what skill!”

LaRoux doesn’t deserve to be treated like eye candy or a pin-up girl. She deserves to be appreciated as an athlete doing something skillful and brilliant, because that’s who she is and that’s what she does.

As evidenced by both the Williams and LaRoux scenarios, sexism is still a battle women must fight. A woman’s talent will only be respected and appreciated more than her body when female athletic competitions garner the support of the majority of the country.

Mia Hamm, Sydney LaRoux, Serena Williams, and Victoria Azarenka are beautiful women and not because of their facial features or physiques; they are beautiful because they do what makes them happy and they do it to the absolute best of their abilities.

One day, when sexism is diminished, more than a mere three percent of households will watch women’s tennis and Williams’s ability to play tennis will overshadow her cleavage.

With any luck, Team U.S.A. will continue to grow and permeate American culture, and instead of objectifying their bodies people will value their athletic abilities.

Williams, Hamm, LaRoux, and countless more women like them break sexist stereotypes by knocking down barriers, doing what they want to do, and doing it better than anyone else. Their successes inspire young girls and pave the way for generations of strong, talented females.