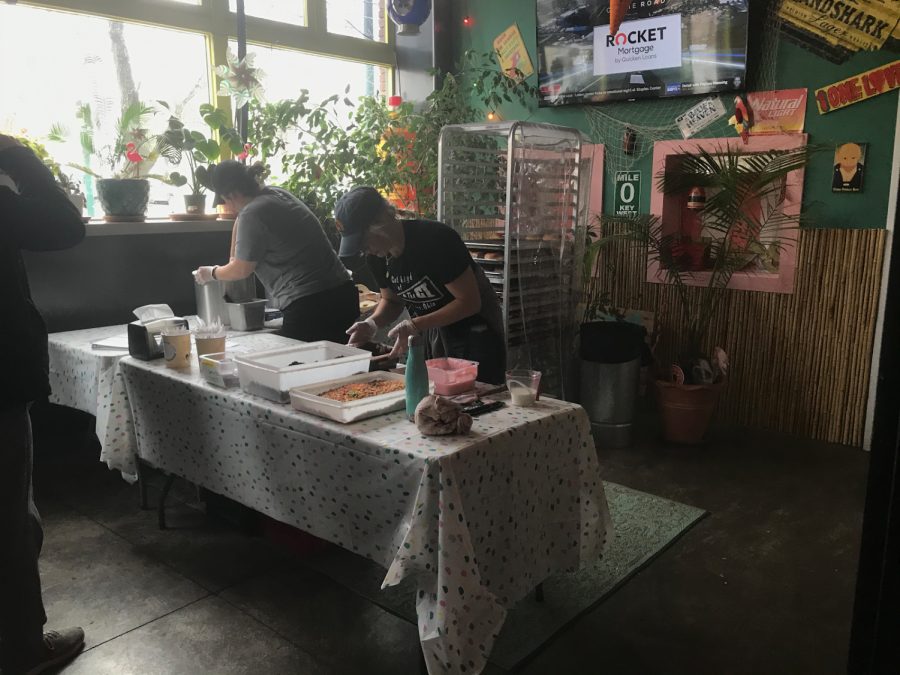 The donut-ice cream assembly line at Brewnuts on Saturday, Feb 1

“On Facebook they said this line would be fun,” said a defeated donut-seeker, heading for the door after deciding the double wrapped line inside of Brewnuts, a West Side donut and beer establishment, was too long to handle. And, in his defense, it was a very long line.

It took about 40 minutes to go from the front door to the counter, and another excruciation 30 seconds to walk to the assembly station to receive the heart-palpitating, unhealthy concoction so many people had travelled to Gordon Square to acquire—but the first bite made everything worth it.

Feb. 1 was National Ice Cream for Breakfast Day. To celebrate, Brewnuts and Mitchell’s teamed up to co-host a donut ice-cream sandwich event at Brewnuts’ 65th and Detroit storefront—the third time that Brewnuts has celebrated this holiday, which began as a partnership with Mason’s Creamery before transitioning to Mitchell’s.

“We worked with Mason’s Creamery in year one as [we] are close friends and once they converted their ice cream shop to a ramen shop in the winter, it was no longer feasible to work with them on years two and three,” Brewnuts owner Shelley Pippin explained. “We [then] approached Mitchell’s, as we think they are a wonderful local business who makes an incredible product. We love working with them each year and they are consummate pros with a super helpful team.”

The Brewnuts experience is never a particularly inexpensive one—one regular donut will run you $3. The special event was no exception—each donut sandwich sold for $8, and the flavors were fairly limited—you could only choose between two types of frosting and two types of ice cream, but no one seemed to mind.

“It was for sure worth it,” said Michelle Hupcej. Hupcej had come with her daughter Hannah after seeing the event on Facebook. After 45 minutes in line, and six bites of donut, Hupcej had come to a rough conclusion—she was already getting full. Still, both Hupcej’s agreed on two things—the line had been worth the wait and they felt bad for the rest of their family, who would instead be brought regular, non-ice-cream-filled donuts.

Brewnuts does not release its sales numbers, but Pippin did say that even with the large line, the store did not see a huge spike in Saturday sales.

“When you consider that Saturdays are our busiest day of the week anyway, and the average ticket price is centered around the ice cream sandwich, it’s not quite as surprising … we sold the sandwiches for $8 and that is not a considerably high ticket when you consider folks who would normally come in on a Saturday and buy a half dozen donuts and coffees or other beverages.”

Those other beverages include an expansive range of beer taps, which people were enjoying for the duration of the event that started at 10 a.m. Still, that fit with the theme that Brewnuts was hoping to deliver.

“We host this event to surprise and delight our guests and create an opportunity for Clevelanders to come out on a cold February morning and do something whimsical and quirky,” Pippin said.

Whimsical, fun and stomachache-inducing are all words that could be used to describe those donut sandwiches. But I’ll defer to Hupcej when it comes to an event review—the whole thing was indeed “for sure worth it.”