Is its second attempt well-developed and romantic or just plain boring? 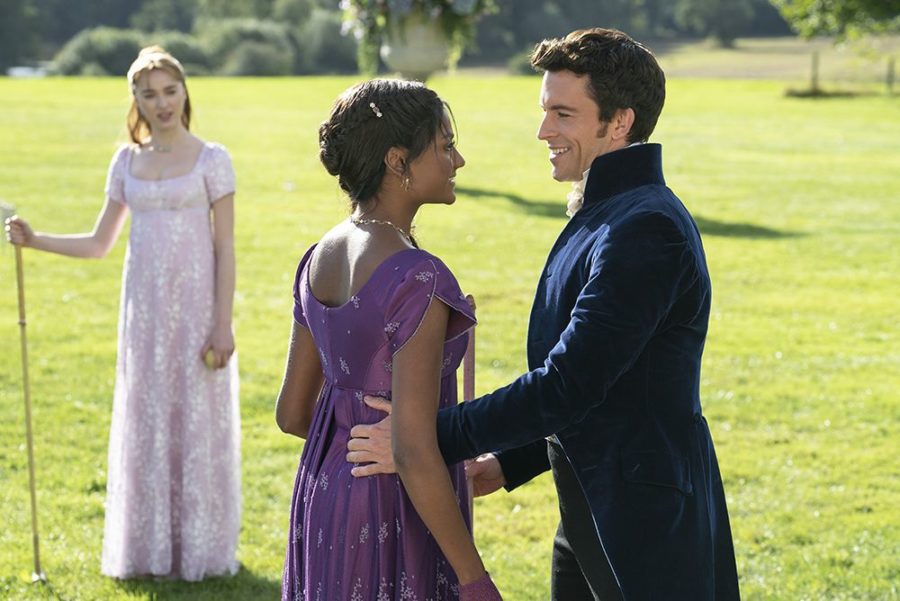 The second season of "Bridgerton" receives mixed opinions, and main characters Anthony Bridgerton and Kate Sharma (pictured) are at the center of the turmoil.

“Bridgerton” is back and popular as ever, but it’s not clear whether the second season is a “diamond of the first water” or a glass of champagne gone flat. While the first season was full of sex, drama and inaccurate period costume design, the second season is much more toned down. It instead chooses to portray a slow-burn relationship between Kate Sharma (Simone Ashley) and Anthony Bridgerton (Jonathan Bailey). While some praise the increased focus on character development and interpersonal relationships, others miss the campy, guilty pleasure show they knew and loved. The crucial question is whether the execution of the second season is actually good enough to justify its new tone.

Let’s start with what worked in this second season. Kate and Edwina Sharma (Charithra Chandran), are a spirited pair of sisters whose onscreen chemistry, both with each other and with the comparatively lacking Anthony Bridgerton, provides the far more compelling half of the season’s main plotline. The show has also included substantial South Asian representation, as the Sharma family hails from Bombay (in reality, Simone Ashely and Charithra Chandran are both Tamil)—a source of acclaim. The Sharma sisters wear South Asian-inspired jewelry, speak to each other in Tamil and participate in the Haldi ceremony before Edwina’s wedding. While the first season did feature an ethnically diverse cast, the representation wasn’t on the same level as this new season.

Some beloved aspects from the first season return, much to the delight of fans. Wholesome Bridgerton family interactions are rare when they banter so much, but seeing the siblings dance together after no one showed up at their ball was heartwarming and showed off Anthony’s softer side. Opulent set design and costuming gives viewers something to gawk at despite the lack of the earlier season’s steamy scenes. The many dances and parties the characters attend are set to covers of popular songs such as Madonna’s “Material Girl” and Jatin-Lalit and Lata Mangeshkar’s “Kabhi Khushi Kabhie Gham.” The aesthetic of the show, a frothy, pastel-toned Regency-era England on steroids, remained very much intact. You can definitely tell how much money was put in this show, with a reported budget of $7 million per episode.

But in my opinion, the biggest letdown of this season is an aspect that many actually enjoyed—the romance itself. Although not all bad, the setup is very predictable: the older sister Kate is determined to find a husband for her younger sister Edwina in order to secure their family’s fortune. However, even if the rich and titled Anthony Bridgerton would be a good match, she’s determined to keep the young couple apart due to Anthony’s bad reputation. And what’s more, while Kate and Anthony say they hate each other, their anger only seems to fuel the obvious romantic tension between them. So what’s the catch?

The biggest letdown is that Anthony Bridgerton is not a likable character. Just like in the first season, he starts out as bossy, stubborn, slightly misogynistic and inconsiderate. He has a list of near-impossible standards for his future wife to meet, never acknowledging his own faults. And worst of all, instead of reconciling any of these issues on his own and growing as a character, he only progresses further due to his relationship with Kate. The writers seem to think that her accepting him as a match is an indication that she misjudged him or that he’s changed, but to me, it’s not enough. Since Anthony is hard to root for, it’s hard to root for him and Kate to end up together; some of their scenes together end up dragging as a result. I appreciate a slow burn, but this one was just a little too drawn out. There are only so many times I can watch two people breathing down each other’s faces without starting to feel uncomfortable, and Kate and Anthony definitely get to that point.

Even worse, while Kate and Anthony were busy lying about their feelings, the other characters were lacking in the drama department. Last season’s side plots featured a secret pregnancy, a mystery gossip columnist, sordid artist parties, thrown boxing matches and a near duel to the death, among others. The subplots this season were lacking in comparison, and many were simply continuations of ones we had already seen. “Bridgerton” felt like it switched audiences completely, going from a show you watched with your friends to laugh at to one you would watch with your mom, and not in a good way. It’s clear that the intention was for the show to be taken more seriously, and while I can believe that they will get there one day, this season didn’t quite get to that point and ended up in an awkward middle. Hopefully, the next season will strike a better balance between entertainment and building a serious relationship—and not whatever was going on in that scene with the bee.