Bring out the brooms 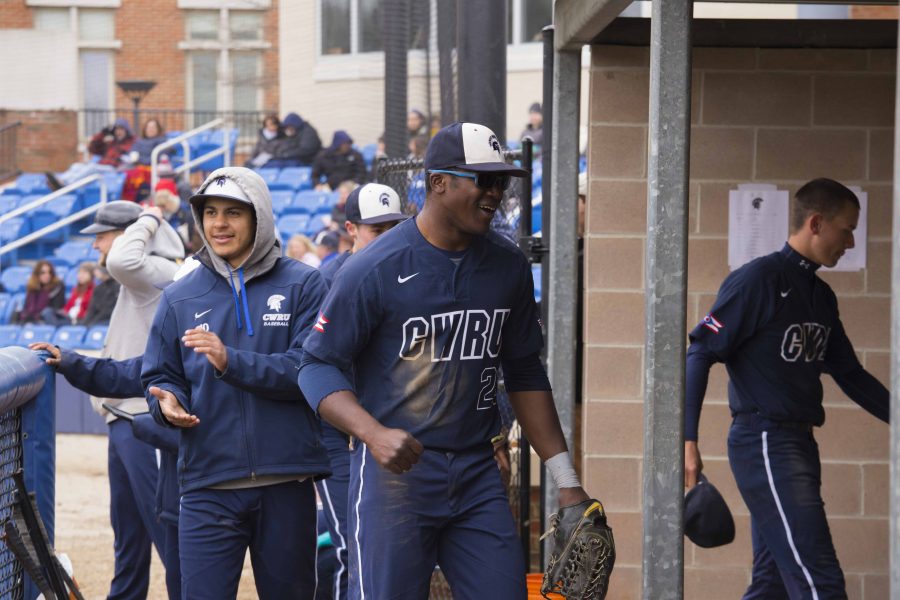 The baseball team has quite a few reasons to celebrate during their six game winning streak. They are averaging more than 10 runs a game during their streak.

The Case Western Reserve University baseball team swept their home weekend series against Brandeis University, winning all four contests and pushing their winning streak to a season high six games. The Spartans have won 10 out of their last 12 games, improving their record to 12-11. The team also holds a 6-2 record in the University Athletic Association (UAA).

With the fourth win, Head Coach Matt Englander set the program record for wins by a head coach with 246. In his 11th season at the helm, Englander averages 23 wins per season.

In the first game of a double header, the Spartans played a close affair that carried into extra innings, eventually winning 8-7. It was the team’s first extra inning game this season.

In the contest, the Spartans got on the board early, putting up two runs in the third and fourth innings.

In the third, fourth-year catcher Eric Eldred hit a single driving in second-year shortstop Rocco Maue. Later in the inning, fourth-year center fielder Aaron Cain hit a sacrifice fly to left field driving in Eldred. In the bottom of the fourth, second-year third baseman Jacob Kucia launched a single to center field that drove in third-year left fielder Dan Watson. Rocco later scored in the inning to put the Spartans up 4-0 after four innings. In the top of the sixth inning, second-year pitcher Mark Gross ran into some trouble, allowing six runs on four hits as Brandeis took a 6-4 advantage.

The Spartans would respond in the bottom of the frame, however, as Watson scored off of a wild pitch after he hit a triple to open the inning. Later in the inning, Eldred singled again to score Kucia.

The score remained tied at six until the 10th inning when Brandeis took a 7-6 advantage. The Spartans would not go away, as they would score two runs in the bottom of the inning. The game-winning run scored on a walk-off bases loaded walk from Kucia.

In the second game of the double header, the Spartans made quick work of Brandeis winning by a final score of 10-0 in just seven innings. The game ended early due to the mercy rule.

The Spartan offense scored quickly and often in this one, with the team pouring in eight runs in the first three innings alone. Third-year pitcher Ben Murphy pitched six solid innings of shutout baseball for the team in the win. Eldred homered and Kucia had two run-scoring triples in a game that saw the Spartans outhit Brandeis 10-0 and improved Murphy’s record to 4-0 and his ERA to 1.44.

In the Spartans’ second doubleheader of the weekend, fourth-year pitcher Jake Shields twirled an absolute gem in the first contest, hurling a complete game shutout and allowing only three hits in an 8-0 Spartan victory. Shields also struck out 12 batters in the contest and walked just two, improving to 2-3 on the season. He was honored as the UAA Pitcher of the Week because of his stellar outing.

The Spartans struck early and often in this contest as well, scoring two runs in the bottom of the first inning off of a single from Watson. In the fourth, the Spartans expanded their lead with six more runs. CWRU got contributions from Kucia, Eldred and Cain in the inning, with Kucia leading off the scoring with a solo home run.

Eldred finished the series 7 for 13 with a home run and six RBIs. He also caught all 35 innings and did not allow a stolen base. For his efforts, he was named UAA Hitter of the Week, giving the Spartans a pair of UAA honorees.

In the final game of the weekend for the Spartans, first-year pitcher Casey McConihe earned his first win in a Spartan uniform as the team beat Brandeis by a final score of 5-2.

Brandeis got off to a quick 1-0 lead in the top of the first before the Spartans rallied in the second and third innings to take a 2-1 lead. After a fifth inning that saw Brandeis tie the score, CWRU responded with two of their own, giving themselves a 4-2 lead. Another run for the Spartans in the sixth inning sealed the game and the series sweep.

“The team did a better job preparing and being diligent in practice and the results showed on the field,” said Englander.

He also said that if the team “prepared the same way” for their upcoming series, they would expect to to continue getting positive results on the field.

The Spartans will look to extend their six game streak as they play a four game series at UAA rival New York University this weekend. The first game starts at 3 p.m. on April 7.