Browns close out preseason with win over Falcons 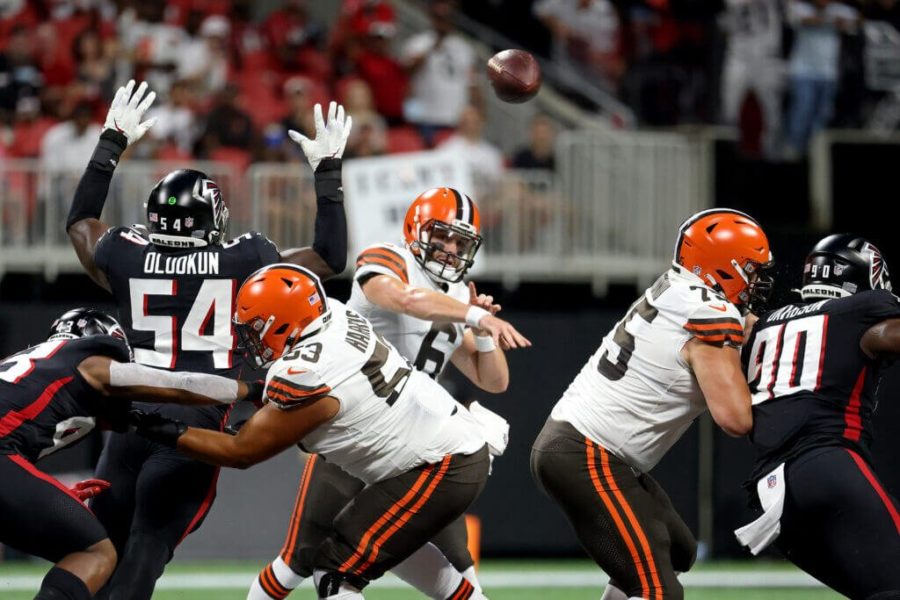 Courtesy of The Athletic

Browns quarterback Baker Mayfield (6) throws a pass in the beginning of the game against the Atlanta Falcons.

The Cleveland Browns closed out their preseason by staying undefeated and besting the Atlanta Falcons 19-10 on Sunday, Aug. 29. The Browns had a fairly solid showing as most of the players got a chance to solidify their spots on the depth chart before the season opener in less than two weeks.

At the quarterback position, Baker Mayfield led the team for the first two drives of the game and threw for 113 yards, resulting in a touchdown. He connected with tight end Austin Hooper for a 35-yard pass on a third down in his first drive and also threw for a 22-yard touchdown in his second and final drive of the night.

Case Keenum and Kyle Lauletta fought for the backup quarterback spot and both performed with some success. Keenum threw for 109 yards on 12/19 passing but was unable to pass for any touchdowns. Though Lauletta threw for 150 yards on 11/22 passing and had a touchdown in his name, he unfortunately threw two interceptions during his time on the field. With cuts to make, the team would probably look to keep two quarterbacks for the final 53-man roster.

On the ground, the team did not have much success, rushing for 71 yards in 24 carries and averaging about three yards per carry. The leading rusher for the team was John Kelly who had 30 yards in 10 carries. First-string running back Nick Chubb did not play and backup Kareem Hunt had two carries for five yards.

On the defensive end, the team forced multiple fumbles from the Falcons and recovered one for a turnover.

The team now has their eyes set on their regular season opener against AFC opponents Kansas City Chiefs on Sept. 12 and will look to finalize their roster in the next week. After years of rebuilding and a short playoff run last season, the team is looking poised to push deep into the playoffs this year.