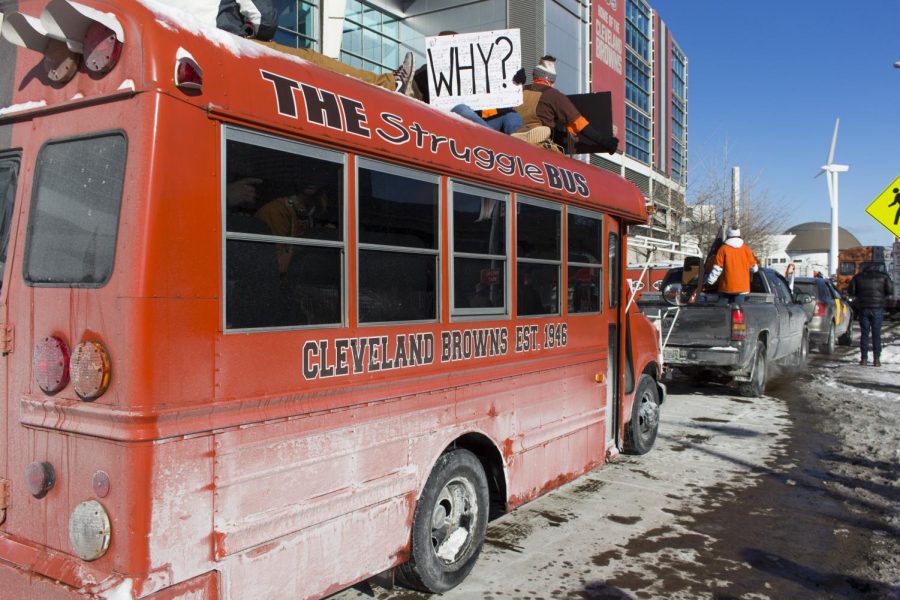 Many Browns fans wonder when the Struggle Bus will ever drop them off.

By defeating the New England Patriots 41-33 this past Sunday, the Philadelphia Eagles claimed their first Super Bowl victory in franchise history. 12 of the NFL’s 32 teams still have yet to win a Super Bowl since it began in 1965.

However, four teams have never even made it to the big stage: the Detroit Lions, Houston Texans, Jacksonville Jaguars and, you guessed it, the Cleveland Browns. With a 1-31 record over the past two seasons and the Eagles claiming their first title, Browns fans have to wonder when their franchise will return to its former, nearly ancient glory.

To get there, the Browns must take things one step at a time by first winning a game.

As a result of their winless season, over a thousand disgruntled fans marched around FirstEnergy Stadium on Jan. 6 in an event dubbed The Perfect Season Parade 2.0. A frozen-over Lake Erie and frigid single-digit temperatures matched the icy mood of the crowd.

Fans came out dressed in full regalia to express their disappointment, including a man in a Sasquatch costume who carried a sign that read “spotted more than a Browns win.” Atop one bus sat two fans dressed in Donald Trump masks. They held a sign “Make the Browns Great Again.”

After decades of irrelevance, Browns fans seem to have finally had enough.

They carried tombstones marked with the names of Johnny Manziel, Tim Couch and other familiar names touted as possible saviors to Cleveland football. Since 1950, the Browns have had 55 starting quarterbacks, and 28 since 1999. Since the team benched Brian Hoyer in 2014, the Browns have won a total of four games.

The lack of success is in stark contrast to the Cleveland Indians and the Cleveland Cavaliers, who now yearly compete in postseason play. Wilmel Cosme, a fourth-year Case Western Reserve University student, Clevelander and lifelong Browns fan, expressed pessimism when thinking about the team’s future.

“The parade last month was the culmination of years of anguish,” he said. “Fans are upset and they have the right to do so. How do you think anyone would react if their football team went 1-31 over the span of two seasons?…I have been a fan of the Browns from the moment I understood the basics of American football. The team has been through its ups and downs, but as of late the direction of the team is worse than acceptable.”

For Eagles fans, a Super Bowl victory seemed impossible. Right now, Browns fans can only dream of a winning season.