Browns offense disappoints in vital primetime matchup against the Ravens 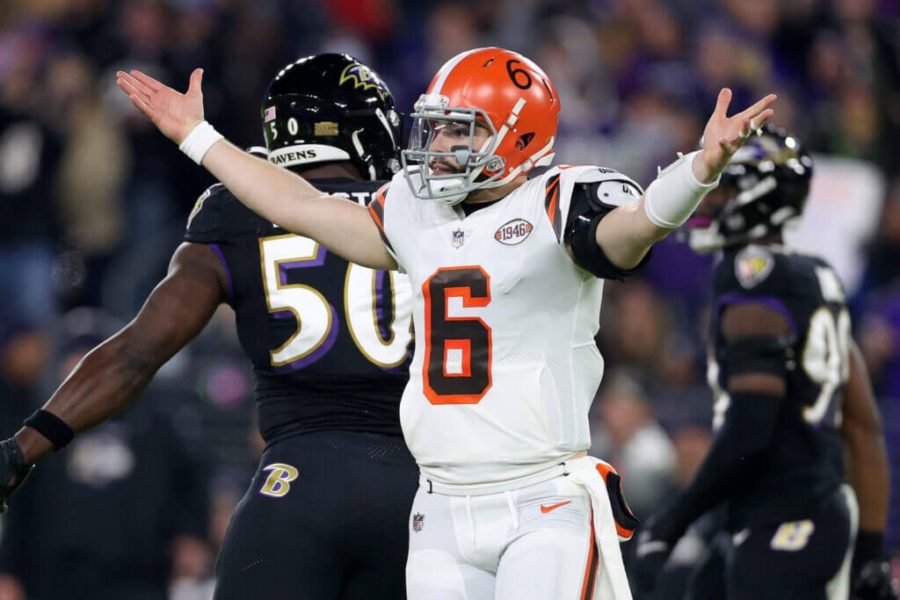 Courtesy of The Atlantic

Sunday Night Football in week 12 of the 2021 NFL season featured a divisional showdown, as the 7-3 Baltimore Ravens hosted the 6-5 Cleveland Browns. This was a crucial game for both AFC North teams, as a win for the Browns would have kept their playoff push going strong. Unfortunately, the Ravens came out on top, 16-10, and maintained control of the top seed in the AFC.

The last time these two teams met was in a thriller on Monday Night Football in late 2020. The Ravens edged out the Browns after former unanimous MVP quarterback Lamar Jackson left the game briefly to much speculation, only to come back later and heroically lead Baltimore to a riveting 47-42 road win.

In 2021, the Browns have noticeably regressed, posting a 6-5 record entering this game, after finishing 11-5 the previous year. Numerous injuries to key players mixed with a tough schedule have led to underwhelming outcomes for the Browns, who have narrowly beaten bottomfeeders and fared poorly against most noteworthy opponents.

On the other hand, the Ravens have exceeded expectations. Despite facing early-season injuries that sidelined essential players for significant time, the Ravens worked their way to an elite 7-3 record prior to their bout with the Browns. Led by Jackson and former Coach of the Year and Super Bowl champion head coach John Harbaugh, the Ravens had mounted several impressive late comeback victories that undoubtedly had fans on the edge of their seats. This time, however, the Ravens refused to give up control of the game.

The Browns arrived at M&T Bank Stadium looking to avenge last year’s nail-biting loss. The defense came to play, but the offense struggled. The Browns got the ball first and drove down the field quickly. The drive was highlighted by a 36-yard strike from quarterback Baker Mayfield to wide receiver Jarvis Landry, which converted a third down and put the Browns within field goal range. This opening drive was promising for Mayfield, who continues to play through injury to help his team make the playoffs. Chances of a quick lead were dashed as kicker Chase McLaughlin missed a 46-yard field goal, forcing the Browns to hand the ball over to the Ravens.

The Ravens offense ran onto the field looking to continue their impressive season, but punted after star defensive end Myles Garrett set the tone, sacking Jackson on a fresh set of downs—much to the delight of Browns fans. Cleveland failed to make anything happen with their next possession, on which star Browns tackle Jack Conklin suffered a season-ending knee injury. Cleveland punted the ball right back to Baltimore, who came away with the first points of the game on a 52-yard field goal by kicker Justin Tucker. The legendary Ravens kicker set the record for the longest field goal in NFL history with a 66-yard game winner against the Detroit Lions back in Week 3, making this one a no-doubter.

The Browns came up empty on the next possession as well. Running back Kareem Hunt carried the ball for 10 yards on four straight plays before Mayfield was forced to throw the ball away twice under duress. This drive took the game into the second quarter and the punt gave Baltimore the ball once again.

The Ravens marched downfield as Jackson converted second- and fourth-down situations with his running abilities. The dual-threat star was stopped in his tracks, though, after a false start penalty pushed the Ravens back to fourth and goal with six yards to go. Tucker drilled the short field goal, and Baltimore took a 6-0 lead.

Cleveland’s offensive woes continued. Though Mayfield found tight end Harrison Bryant on a 41-yard pass to begin the drive, Bryant went down with a high ankle sprain on the play and didn’t return to the game. To make matters worse, Landry received the direct snap on the next play, only to be strip sacked by Baltimore linebacker Odafe Oweh. The fumble was recovered by Ravens linebacker Patrick Queen.

Browns cornerback Denzel Ward retaliated with some heroics for his hometown team on the ensuing Ravens possession, intercepting Jackson two plays into the drive. The pick saved the Browns from potentially getting buried, and the offense came away with a McLaughlin field goal from 46 yards to cut the Ravens’ lead down to three.

Little did everyone know, the Browns’ ballhawks were just getting started. Jackson’s next pass was intercepted again, this time by safety Grant Delpit. Unfortunately, neither team seemed too keen on keeping the ball, as Mayfield was strip sacked and the fumble was recovered by Oweh, only for Jackson to throw his third interception of the half just four plays later. Browns safety Ronnie Harrison Jr. came away with the ball, but the offense stalled and the punt gave the Ravens the chance to run out the clock and put fans at ease for a moment.

Following the turnover frenzy in the first half, the Ravens found the reset at halftime to be helpful. Methodical play-calling drove the offense at first, but the chemistry between Jackson and tight end Mark Andrews quickly took over. The pair connected for a stellar 39-yard completion that Andrews hauled in as he was being illegally pulled down by the defender. A few short plays later, Jackson and Andrews connected again for an electric 13-yard touchdown to help put Baltimore up 13-3. Jackson nimbly evaded the Browns pass rush with such ease before finding Andrews that even Garrett couldn’t hold back his amazement, praising Jackson after the play.

Down two scores, Mayfield and company failed to answer, but the Browns defense made up for it, as they forced the Ravens to punt their next possession, as well. This time, the Cleveland offense struck pay dirt, as Mayfield passed a deep ball to Landry for 38 yards before throwing a 20-yard touchdown pass to tight end David Njoku three plays later. McLaughlin nailed the extra point, and it seemed as though the Browns were back in business.

The Ravens entered the fourth quarter with the ball and sought to extend their lead, but Cleveland safety John Johnson III miraculously came up with Jackson’s fourth interception of the day on a deep pass to Andrews. Johnson’s clutch defense gave the Browns just the spark they needed to potentially take a late lead—or at least tie the game at 13. Unfortunately, the offense ran out of juice after just their lone touchdown drive, as they punted away two possessions.

With the ball at 6:27 left to go, the Baltimore offense began a steady drive that accomplished just what the team intended: score while taking enough time off the clock to put Cleveland in a difficult situation. The Ravens burned nearly five minutes of play and walked away satisfied following a 49-yard Tucker field goal that put the Browns in a 16-10 hole.

Desperation crept in for the Browns, as they needed to travel 75 yards downfield and score a touchdown in 70 seconds with no timeouts. Reigning Coach of the Year Kevin Stefanski saw no other choice but to have Mayfield throw the ball each chance he got. Mayfield’s first three heaves all fell incomplete, so the fourth and final one which was reeled in by Njoku for just seven yards turned the ball over to the Ravens. Jackson knelt to run the clock out and end the game with yet another victory against Cleveland. The win for John Harbaugh came just a day after his brother Jim, head coach of the University of Michigan Wolverines, took down another Ohio team. The Wolverines flipped the script on the Buckeyes, winning the rivalry for the first time since 2011. This Ravens victory, on the other hand, marked their fourth straight win over the Browns.

As the Browns fall to 6-6 on the season, their playoff hopes are in jeopardy, and Mayfield’s future with the team has come into question. Prior to the game, NFL teams since 2013 were 0-54 when throwing four or more interceptions, but the inability of Mayfield to lead a thoroughly talented offense, given great field position by a plethora of turnovers, to more than one field goal helped that record improve to 1-54. Granted, Mayfield and the rest of the team have suffered quite a few significant injuries, but the Ravens have had worse and done more with less. Mayfield is due for a new contract soon, and if Cleveland’s season doesn’t pick up drastically from here, he might find himself playing somewhere else next year.

The Browns get a bye in week 13. Hopefully the week of rest prepares them adequately, as they get back into action on Dec. 12 against none other than the Baltimore Ravens.