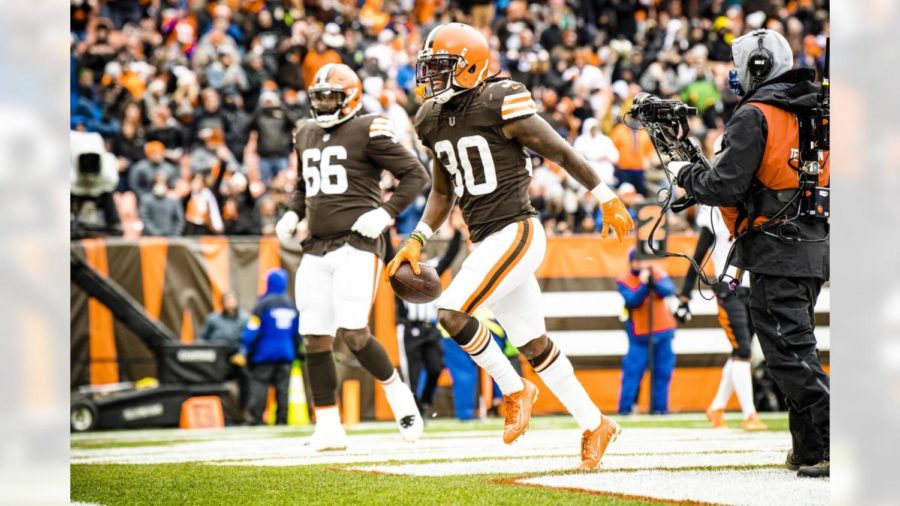 The 2021 NFL season finale featured several high-profile matchups with playoff spots on the line, but for the Cleveland Browns it was a chance to finally put this disappointing season in the rear view. The Browns hosted the Cincinnati Bengals, who were fresh off a division-clinching win over the mighty Kansas City Chiefs.

With their playoff spot locked, the Bengals gave their backup players a chance to shine to prevent injury to their stars before the postseason. The Browns also played some of their backups since they had been eliminated from playoff contention and key players, such as quarterback Baker Mayfield, needed rest after playing through injury in desperate hopes to catapult the struggling team to the playoffs.

The game started out sluggishly as expected, with 5 punts before either team scored. With over 4 minutes left in the first quarter, the Browns finally put together a scoring drive on their third possession. Quarterback Case Keenum hit wide receiver Donovan Peoples-Jones on the first play for a 22-yard reception. A few plays later, Keenum found wideout Jarvis Landry on a 26-yard pass for a touchdown to put the Browns up 7-0.

The Bengals’ subsequent possession took the game into the second quarter before Browns defensive end Jadeveon Clowney sacked quarterback Brandon Allen for a loss of 7 yards on third down to force a punt.

Cleveland’s offensive success continued, with running back D’Ernest Johnson shouldering the load. He carried the ball 3 times for 20 yards, including a 4-yard run into the end zone, swelling the Browns’ lead to 14-0.

The teams traded 3-and-outs before Cincinnati’s final possession of the half. On the drive, Clowney continued to ruin Allen’s day, strip-sacking him to put the Bengals in a sticky 3rd and 33 situation. The Bengals punted, but their defense stepped up despite their stalling offense.

Safety Trayvon Henderson recovered a fumble on the third snap and took it 29 yards to the house, trimming Cleveland’s lead back down to 7. The Browns tried to tack on a few more points before the half and orchestrated a 63-yard drive, but Bengals cornerback Mike Hilton killed the drive with a clutch red zone interception to send the game to halftime.

The Browns opened the second half with possession but went 3-and-out. Bengals running back Trayveon Williams was everywhere on the next drive, picking up 25 rushing yards and 4 receiving yards on the 52-yard march downfield. A timely sack from star defensive end Myles Garrett killed the Bengals momentum and held them to a field goal.

With a 14-10 lead and the ball, the Browns tried to bury their division opponents deeper, but turned the ball over once again with an incomplete pass on 4th down just 2 yards from the end zone.

The game was now in the fourth quarter, but the Bengals played without any urgency and punted the ball after picking up just one yard. The Browns got the ball and, already inside Bengals territory, put together a scoring drive that effectively shut the door on Cincinnati. Johnson carried the ball on every play except the last, tallying 36 yards on 9 carries before Keenum threw a 10-yard touchdown pass to running back Demetric Felton.

The Bengals offense eventually found a little life, but the 75-yard touchdown drive was too little too late. The possession was highlighted by a 26-yard pass from Allen to wide receiver Trent Taylor and a 4-yard touchdown pass to running back Chris Evans on 4th down. The Bengals opted for a 2-point conversion attempt to put them within a field goal of tying the game, but Allen missed Taylor, and the Bengals deficit sat at 5.

The Browns ran the clock out to sign off the season finale, finishing with a measly 8-9 record. Injuries to key players proved to be detrimental, as they finished the year with 3 fewer wins than in the 2020 season, in which they captured their first playoff win in 26 years under reigning Coach of the Year Kevin Stefanski.

The Browns will sit at home for the playoffs, contemplating the improvements necessary heading into the 2022 season. For now, they remain committed to Mayfield, giving the injured quarterback the benefit of the doubt in a time when even the local media has turned on him. As for the Bengals, they will host the Las Vegas Raiders in the wild card round on Saturday in hopes of earning their first playoff win in 31 years.