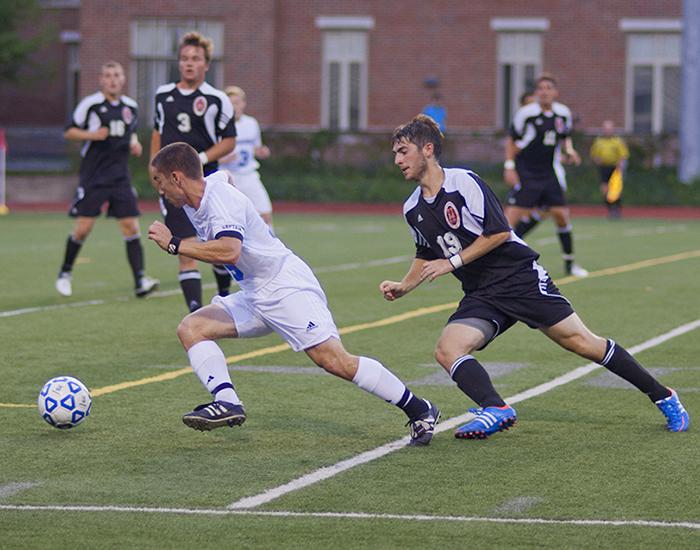 It’s been a tough few weeks for the Case Western Reserve University men’s soccer team, as a pair of losses this past weekend keeps the team winless in University Athletic Association play. The men are finishing up a brutal stretch that has the Spartans on the road for six of eight games. In addition to the lengthy road trip, Case has played six straight nationally ranked opponents and has failed to pick up a point in any game. The men are on an eight-match losing streak, having not won since a 2-0 victory at Oberlin College on Sept. 15.

This past weekend, the Spartans traveled south to Atlanta, Ga., where they took on Emory University (7-5-2, 2-1-1). Case matched an early Eagle goal but the home team racked up four unanswered goals before the Spartans could score again, and the hosts won 5-2.

Emory got on the board first, just three minutes into the game, when the Eagles’ Alex Scott headed in a goal past sophomore keeper Jay Darby. Scott’s goal came off an assist via a cross by David Garofalo.

The Spartans showed signs of life when senior forward Eric Erb scored his fourth goal of the season, tied for most on the team, just six minutes later to equalize. Chris Cvecko was credited with the assist.

Emory continued to pressure and scored again in the 22nd and 28th minutes. Dylan Price scored off a pass from Garofalo to give the hosts the lead before Alex Scott added an insurance goal via Jeffrey Cochran to make it 3-1.

The second half came with a change in goal for the Spartans, when Darby was pulled for senior Ryan Koepka. The change did little to stop the charging Eagles, as the hosts would score twice in the first eight minutes of the second half.

Andrew Nataliano would score his team-leading 10th and 11th goals of the season for the Eagles off a corner kick in the 47th minute as well as off pinball passes in the box in the 53rd minute. Nataliano’s brace gave the Eagles a 5-1 lead with over 35 minutes to play.

Sophomore Bairdy Hansen would get one back for the Spartans shortly after Nataliano’s second. Playing off a long cross from Kostis Theoharides, Hansen slotted the ball past the Eagles’ keeper, Abe Hannigan. The goal was Hansen’s first of the year. The assist was Theoharides’ team-leading third of the year.

On Sunday, Oct. 14, the Spartans traveled to Pittsburgh, Pa. to take on the Tartans of Carnegie Mellon University (9-2-1, 2-1-1). The Tartans, ranked No. 8 by the National Soccer Coaches Association of America, took control of the match early and dominated the Spartans in a 4-0 victory.

The Tartans began the match with the first 10 shots of the game before finally scoring in the 38th minute against Koepka. CMU’s Ben Bryant opened the scoring off a pass from Ben Christensen.

Carnegie Mellon would add its second goal of the game after a penalty in the 59th minute. Forward Max Tassano converted from the spot to give the Tartans a 2-0 lead.

Carnegie Mellon would close out the game with goals in the 75th and 88th minutes. Alex Abedian scored the Tartans’ third goal off a corner while Daniel Kursman-Neri scored his first goal of the season from seven yards out.

Koepka finished the day with five saves and fell to 2-8-1. The Tartans’ Christopher Madden finished with two saves in the shutout.

The Spartans will face nearby Notre Dame College on Sunday, Oct. 21, at Brush High School, as they look to get their first win in over a month.

Case will close out the home portion of its conference season when it hosts the University of Chicago (7-3-3, 1-2-1) on Friday, Oct. 26 and Washington University (7-4-1, 2-2-0) on Sunday, Oct. 28. The Maroons are seventh in the UAA while the Bears are tied for fifth with the University of Rochester.