Buckcherry sticks to tradition at the Agora 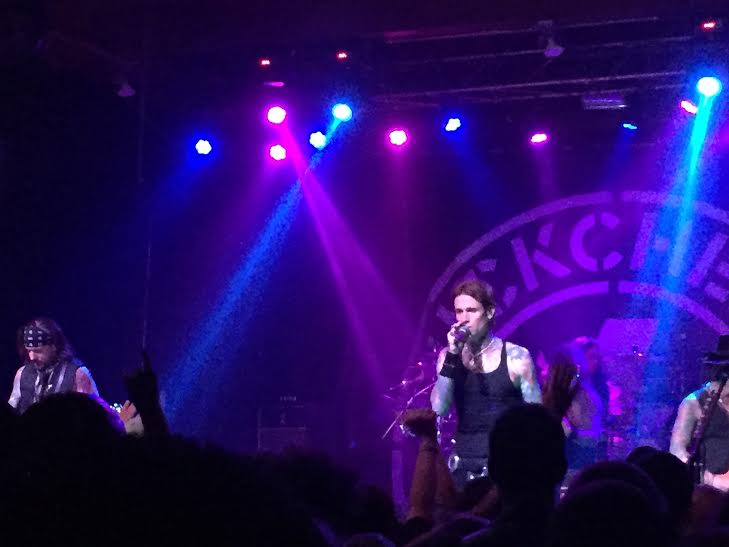 Buckcherry performed at the Agora to an enthusiastic crowd.

In the muzzy and smoky-smelling Agora Theatre and Ballroom, a thin, tattooed Josh Todd, lead vocalist of 2000s band Buckcherry, stormed the stage wearing aviator sunglasses. The perfume of Mary Jane began to work the room. Girls with bleached-blond hair and too much eyeliner began to jump up and down. I knew it immediately: this was a rock show.

Buckcherry recently released their aptly-titled new album, “Rock ’n’ Roll,” their seventh studio album since 1999 and fifth since they returned from a hiatus in 2005. The two founding members of the group,Todd and lead guitarist Keith Nelson, jammed out with new members  to new singles and classics, such as “Crazy Bitch” and “Sorry.”

The audience did some serious headbanging in the first half of the show, but the fans, who were mainly in their late 30s and early 40s, were clearly exhausted by the end. Buckcherry’s rock tunes began to blend together and the audience became fatigued. Everyone came to life for the finale, “Crazy Bitch,” to which the audience sang along with Todd.

Todd and Nelson met through a tattoo artist and formed Buckcherry in Anaheim, California in 1995. The band’s name is homage to classic musician Chuck Berry, who famously performed “Johnny B. Goode” and “Maybellene.”

“’Maybellene’ is my favorite Chuck Berry song,” noted Nelson in an interview prior to Sunday night’s performance. Nelson’s influences include Keith Richards, ZZ Top and Aerosmith. Todd’s resemblance to Steven Tyler in both style and vocal range is quite remarkable live.

“Rock ‘n’ Roll” may sound similar to Buckcherry’s previous albums, but this sound makes up the heart ‘n’ soul of the band and something different or modern would lose their valuable fan base.

Nelson emphasized that Buckcherry wants to continue to put out genuine rock ’n’ roll music that is made for their fan base. The band may have started as five guys who didn’t know each other too well back in 2005, but after more than 1,000 shows the band is closer than ever and knows what kind of music their fans will like.

In response to a question about the secret to their band’s longevity, Nelson replied: “loving what you do.”

The rock band Saving Abel opened for Buckcherry. Saving Abel has also been together for over 10 years. The lead vocalist, Scotty Austin, burst onto the stage with a lot of energy and overall cockiness, sporting a fohawk. He softened up and spent a lot of time thanking fans. The crowd went crazy when they finished with their hit “Addicted,” which I remember played constantly on 92.3 and 100.7 in Cleveland in 2008 when it was released.

Both bands were clearly thankful for their fans, who have supported them through many years and many album tours.