Buddying up at the gym 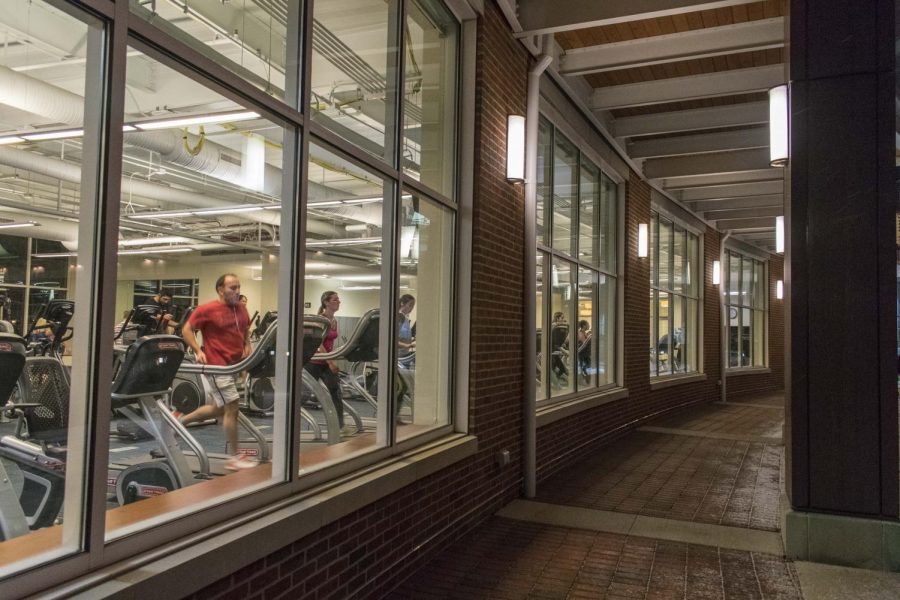 Case Gym Buddies, which formed this January, tries to encourage students to visit the gym by providing support and assistance.

Walking into the gym for the first time can be overwhelming. Everyone inside looks athletic and seem to know exactly what they are doing. Plus, there are a bunch of machines that without the appropriate context look like medieval torture devices.

The DiGeronimo Fitness Center inside the Wyant Athletic and Wellness Center has 4,200 square feet of workout space, while the Veale Athletic Center has four rooms dedicated to weights and cardio equipment. For a student new to the facility, especially one whose New Year’s Resolution is to go to the gym, the feeling of helplessness can be a repulsive force.

That’s where the Case Gym Buddies, Case Western Reserve University’s newest club, can help. Formed by current club president and second-year biomedical engineering and pre-medicine student Alan Dogan and an additional former CWRU student, the club’s goal is to encourage “a healthy lifestyle by teaching and encouraging lifting” through a focus “on proper form and injury prevention.”

But don’t let the club’s motto of “Bulk Beyond the Possible” or its seven “brofessors” fool you. The club is not just for muscular guys who want to become powerlifters or “gym rats.” Dogan hopes to form a community of students helping each other, with a commitment to leading an active lifestyle.

He said, “We’re not pro bodybuilders, we’re not power lifters. We use weightlifting as a technique to better ourselves.”

Dogan started the club because he found a lack of students helping each other lift. Second-year nutritional biochemistry major and pre-medicine student Zach Sedor, the club’s vice president, showed him around the gym last year. The duo then encouraged their floormates on the second level of Sherman House to join them.

Sedor admits, “It’s much easier to go home and eat chocolate all night,” but the club was created to force people to make the more difficult decision and go to the gym.

After formulating the idea, Dogan and Sedor talked to people in Phi Delta Epsilon, the medical fraternity on campus of which both are members. They also reached out to the Zeta Beta Tau fraternity, confirming interest among its brotherhood. Case Gym Buddies held their first general body meeting on Friday, Jan. 19, and though only eight students attended, Dogan was still encouraged. He claims that 36 people have shared their contact information with the club expressing interest in joining.

The club is broken down into two groups: the “brofessors” and the rest of the club. Club treasurer and third-year psychology student Jonathan Daniels, a self-described “avid weightlifter,” said the “brofessors” are well trained in the core weight lifting exercises. They work with the newer members in personal sessions, teaching them different lifts and how to implement them into their routines. “Brofessors” are also present at open gym times, when they are available for advice or just a spot.

Currently, there are seven “brofessors”: Dogan, Sedor, Daniels, second-year dance and nutrition double major Claire Xu, second-year psychology and business double major Andrew Munn, third-year nutritional biochemistry and metabolism major Eric Zhou and materials science and engineering graduate student Zeesha Braslawsce, who is also an alumnus. Dogan described the current “faculty” as people that knew their way around the gym. All of them are current or former athletes, including Munn, a varsity wrestler, and Braslawsce, a former varsity sprinter.

Starting next semester, every general body member will have the chance to become a “brofessor” if they desire. Interested members will need to meet certain lifting requirements, as spotting is an important part of the job. Sedor also said applicants will also need to express a desire to help people.

This goes along with the main theme of the club: changing people’s lifestyles in the long-term. Case Gym Buddies is planning to host seminars throughout the semester on a wide variety of topics, including bulking up, proper lifting scheduling, properly cutting weight and choosing proper supplements. The club hopes the seminars will not just be helpful for new gym-goers, but also the “brofessors” themselves.

Daniels said, “We are not going to be that quick ‘lose your fat and get that summer bod’ club, but more of changing your lifestyle [type of club] … What we can show you and what you can learn from us can make a difference in the long run after you’re done working with us.”

Both Sedor and Dogan said that the club’s first semester on campus will be a success if just a couple of people’s lifestyles have been changed. Once one meets with a “brofessor,” entering the gym won’t be nearly as daunting.