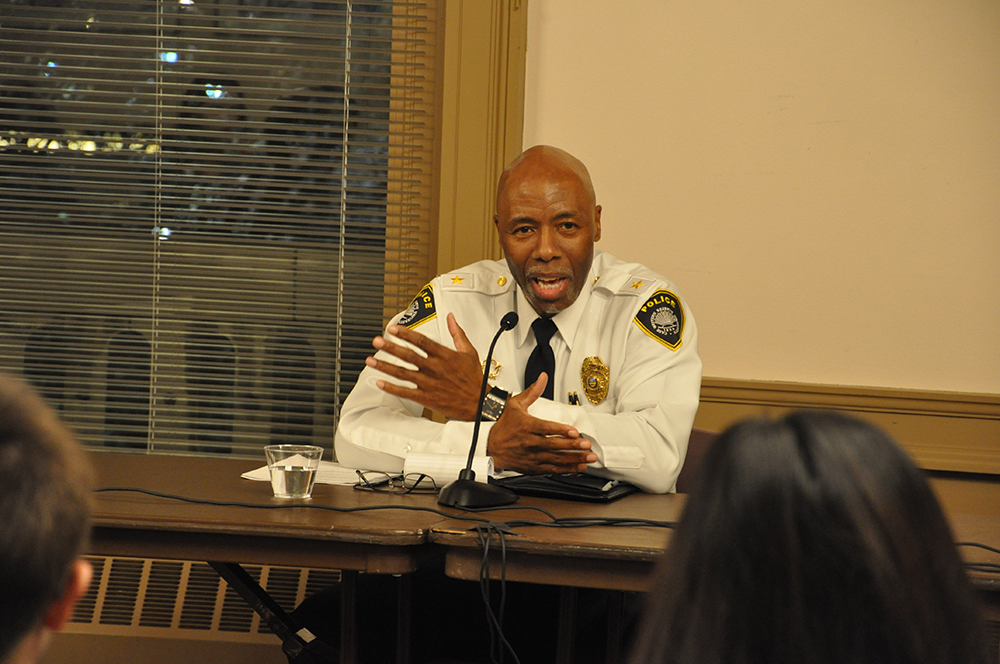 Campus police chief speaks during this past Wednesday’s “Guns, Our Community and Safety” debate hosted by Share The Vision and The Observer.

In the wake of the tragedy at Sandy Hook Elementary, gun control has been of utmost debate in the country. Proponents of additional control say that further regulation would help curb gun violence while critics argue that taking away an individual’s ability to protect themselves would in fact make society more dangerous.

This Wednesday, the discussion took a personal turn with Share the Vision and The Observer hosting a debate on the subject called “Guns, Our Community and Safety”.

Dr. Mark Singer, co-director for the Center of Substance Abuse and Mental Illness, Arthur Hardee, Chief of CWRU Police and director of Security for CWRU, and Rylan Pyciak, President of Spartans for Concealed Carry, presented their opinions on gun regulation and concealed carry on college campuses to a crowd of students in the 1914 lounge of Thwing.

Singer and Hardee primarily were against concealed carry and for tighter gun regulation, drawing from their work in their respective backgrounds, with Pyciak, who was raised in small town in Ohio and says he received his first gun at three years old, taking the opposition.

In his opening statements, Singer emphasized carrying a gun responsibility requires extensive training, much more that current conceal and carried regulations, and that having a gun in one’s home increases a person’s chance of being a victim of gun violence.

“I don’t believe in guns on campus because it would send a very bad message to the community,” Hardee said. “The community and CWRU should collaborate more, so we can maintain and increase safety.”

Due to the fact that the rest of Ohio is concealed carried, Pyciak thought that the University should follow suit.

The panelists then touched on a variety of related issues, including how much defense a gun actually provides, the potential divide between gun carrying and non-carrying students, and how binge drinking or other reckless behavior could impact gun safety.

A majority of audience questions seemed to take Pyciak’s view, addressing Singer’s and Hardee’s views that guns do more harm than the safety they provide.

Kurtis Jensen, a Class of 2012 alum who works at University Hospitals, was one of the audience members who agreed with Pyciak.

“It would be a good thing for a small percentage of people to hold guns on campus,” said Jensen. “It would serve as a deterrent for people wanting to commit crimes on campus. If they couldn’t tell who did or did not have a gun, they wouldn’t want to risk it.”