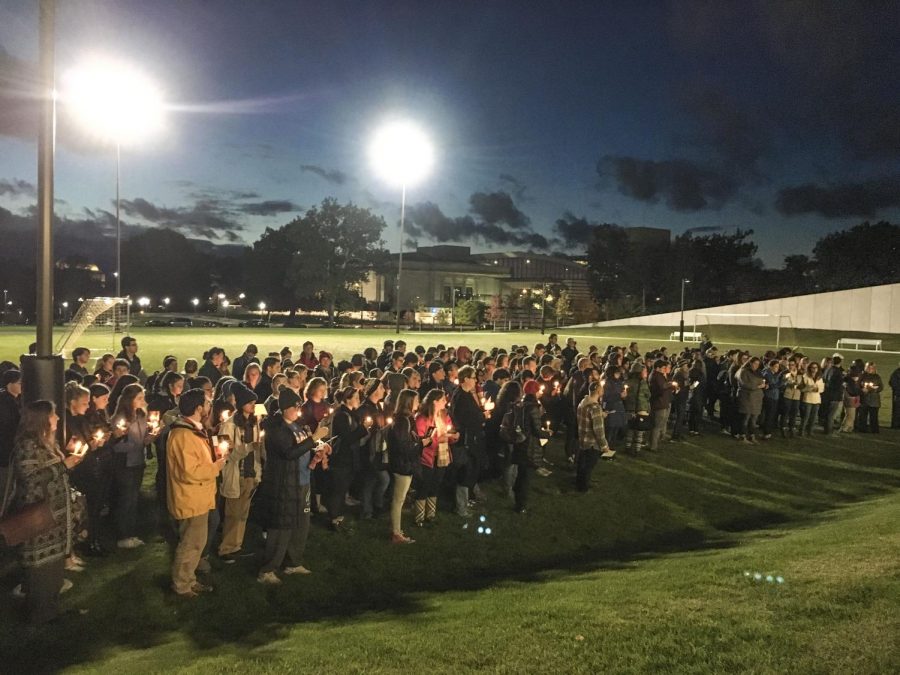 On Monday, a community memorial service was hosted outside of the Tinkham Veale University Center in memory of the 11 killed in the recent Pittsburgh shootings, the deadliest attack against the Jewish community in U.S. history. The service consisted of reading passages from the Torah, mourning prayers and the lighting of candles for each of the victims.

The event was planned by first-year students Sydney Fox and Rose Bernhard, who also gave speeches. Afterwards, attendees filled out forms pledging to honor the victims.

The shooting at the Tree of Life congregation in Pittsburgh’s Squirrel Hill neighborhood on Oct. 27, was carried out by 46 year-old Robert D. Bowers. In addition to the 11 killed, four police officers and two other individuals were injured. After being put in custody, Bowers said that Jewish people “were committing a genocide to his people.”

While he showed no outward indications of anti-Semitism, Bowers was a user of the social network Gab, a platform similar to Twitter. It was through this site that he would repost comments which expressed hatred toward the Jewish people. Such sentiments are not uncommon on Gab; many extremists moved to the site after a ban from the more mainstream social networks due to hateful and violent speech, and the most followed people on the network are members of the far-right.

The internet now exists as a breeding ground for hate speech due to largely uncensored public forums and a culture of relative anonymity.

“[The shooting] was shocking because I’m protected, and I’ve experienced anti-Semitism, but not to that extent,” said first-year student Lauren Sharkey, who frequently attends services at Hillel, a Jewish organization with a campus presence. “It could have been anyone.”

Despite the crimes committed against members of their religion, the speakers made it clear that their faith would overcome any acts of hatred.

“Don’t hide. Show support and show pride,” said Fox. “Send letters. Be tolerant. If you have faith, go pray for your own faith or church.”

Chabad, another Jewish organization on campus, posted a list of deeds people can do to honor the victims. The list included attending a weekly Shabbat dinner, participating in prayer service or attending a Torah class. For those who are non-religious, helping out is as simple as doing a random act of kindness or giving to charity.

Both Sharkey and Fox commended CWRU, with Fox noting there was security at the memorial and that she has always felt safe at Hillel and Chabad. Sharkey was impressed with amount of support the event garnered.

“It was nice to see how many people went to the memorial.” she said, “Community is a very big thing in Judaism, and that’s why people everywhere are coming together to support of each other.”