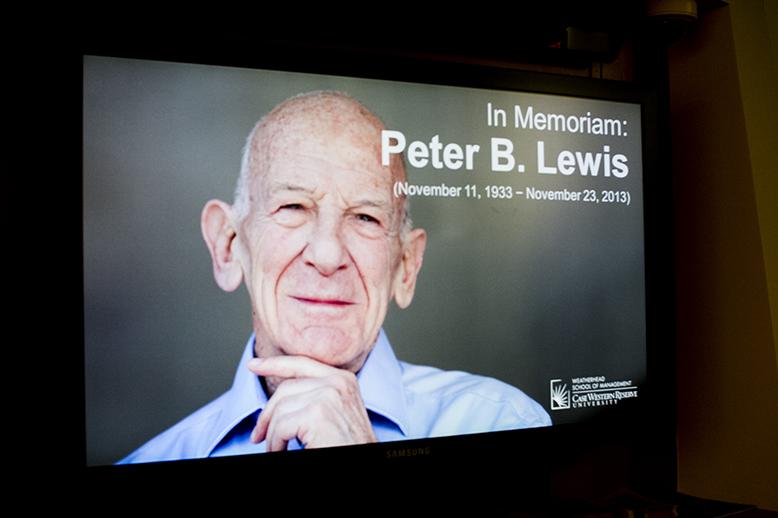 The fluid folds of the Peter B. Lewis building shone a soft blue on Nov. 26, through a noiseless evening snowfall, as guests trickled in to remember the building’s namesake. Peter B. Lewis, businessman, philanthropist and benefactor of Case Western Reserve University, died of natural causes two weeks ago at the age of 80. He was interred at Mayfield cemetery.

Leading up to the memorial reception last Tuesday, classes in the Peter B. Lewis building were relocated to nearby buildings, and large lights on the roof of Mather Memorial bathed PBL in a serene blue. Despite the calm outside, a flurry of preparations made an odd sight inside, with florists arranging flowers in the snow and staff rushing around the usual line at a WEPA print station.

As the reception began, black clad servers replaced the handful who remained. Family and friends of Lewis quietly mingled to celebrate his life and accomplishments at tables glowing the same subdued blue as the building’s silvery exterior. The many monitors scattered around the atrium displayed the smiling face of Lewis, and underneath, “In Memoriam: Peter B. Lewis.”

Born in Cleveland Heights, Lewis made his name transforming the humble Mayfield-headquartered Progressive Corporation, which was founded by his father, into one of the largest insurance providers in the nation. His strategy: focusing on insuring high-risk drivers. What began with 40 empAloyees grew to employ over 27,000 individuals by 2010. Before his retirement as Progressive’s CEO in 2000, Lewis amassed a fortune valued at over $1 billion.

Lewis used a significant amount of his wealth for philanthropic purposes, supporting charities, the arts and education. Lewis gave millions to Princeton University, his alma mater, the Guggenheim Museum and Case Western Reserve University. An enthusiastic patron and friend of architect Frank Gehry, Lewis donated $36.9 million in 1999 to the Weatherhead School of Management for the construction of the Gehry designed PBL building.

However, despite Lewis’s support, only three years later Lewis announced that he would no longer donate to Northeast Ohio efforts, including CWRU, because of perceived poor leadership and financial management in Cleveland. These feelings partially stemmed from his belief that the university had mismanaged the planning and construction of the building that bears his name. In recent years, Lewis’ support of his hometown has since returned, with Lewis making a quiet $5 million donation to the Cleveland Institute of Art last year. Lewis also delivered the address at CWRU’s 2013 commencement ceremony and received an honorary doctorate of letters from the university.

“Peter B. Lewis pushed the boundaries of conventional thinking in everything that he did, and left the world better for his passions,” said CWRU President Barbara R. Snyder in a statement. “He revolutionized the insurance industry, and then went on to help shape the academic and cultural experiences of thousands through his philanthropy. We at Case Western Reserve are deeply saddened by his passing, and profoundly grateful for his contributions to our university and the broader Cleveland community.”

In addition to his philanthropic endeavors, Lewis supported a number of political organizations, including the Democratic Party and American Civil Liberties Union. Lewis was especially known as a champion of medical marijuana, giving millions to fund legalization efforts across the country. Lewis himself was arrested for marijuana possession in New Zealand in 2000. According to Associative Press reports, Lewis has donated an estimated $40-60 million to the cause since the 1980s.