For CWRU alumnus, home is temporary, film is forever 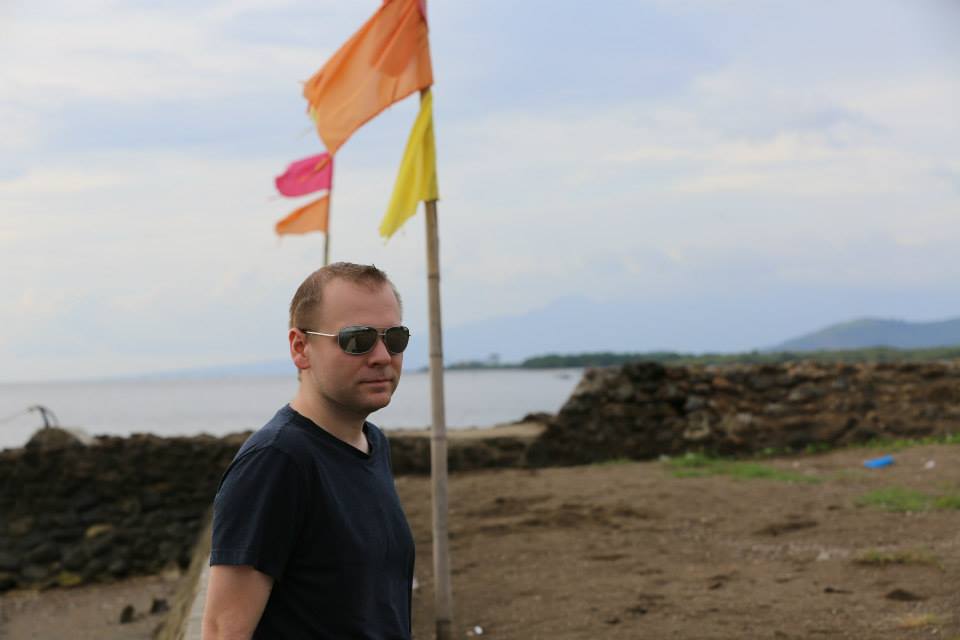 But while the campus may be physically fragmented, the spirit and perseverance of the people who fill it are not. This multipart series will depict very different individuals who have only one thing in common: They are the characters of Case Western Reserve University. And this is their story.

If you want to speak with Mike Suglio, you better be prepared to order a beer. But it’s not about gulping down the suds; it’s about appreciating the conversation in between the sips.

He’ll sit with you as long as you like. He has nowhere to be. No boss to report to.

Because for the first time in his life, this aspiring film maker isn’t just holding his own camera. He’s writing his own script.

Mike Suglio graduated from Case Western Reserve University in 2009 with a degree in political science, psychology and theatre. It may seem like a strange combination, but friends of the short, happy-go-lucky film enthusiast know it’s just par for the course. It’s to be expected from someone who studies a unique assortment of arts and humanities disciplines at a predominately science- and engineering-focused institution.

“I really wanted to get back into film my senior year,” Suglio says as he gazes reflectively into the glass bottles across the bar of the Coventry Village Winking Lizard. “I had done film in high school, but there just weren’t that many film opportunities at CWRU,” he says.

Suglio sought to make a documentary film of the fatal shooting that occurred at the Peter B. Lewis Building on May 9, 2003. The Office of the General Counsel blocked his request.

He decided to do an experiential learning fellowship in film instead. The Support of Undergraduate Research and Creative Endeavors (SOURCE) Office denied him.

The university drew a hard line in favor of “natural” sciences. They forced the aspirational movie buff to color outside of the lines. And that’s exactly what he did.

Suglio began taking film classes at the Cleveland Foundation in order to steer his pursuits with professional guidance. The training eventually helped him secure a SOURCE grant, as well as an experiential learning fellowship.

The resulting creation was an award-winning documentary, “The Struggle for Existence.” The film examined two museums, the Cleveland Museum of Natural History and the Creation Museum in Cincinnati, and documented how investigative methods influence outcomes. It received top honors at Brown University’s Ivy Film Festival, yet it gave validation to Mike Suglio’s most important life choice.

He began writing scripts, directing screenplays and editing the resulting fiction films. “The more you’re exposed to stuff, the more you learn it,” he says. “When you’re in a position to have to do it, you teach yourself.”

He accepted a job in the Division of Student Affairs at Case Western Reserve, where he proceeded to serve as the test accommodations manager for Educational Services for Students (ESS). Meanwhile, he started pursuing his master’s degree in business administration at the Weatherhead School of Management.

But film was never far from mind.

In 2012, he hosted a film festival at The Market Garden Brewery and Distillery in Ohio City, where he employed a simple business model: Filmmakers should show the films of other filmmakers. “You see a need for something and you do it,” Suglio says. “We took a risk and now we’re one of the biggest film festivals in the area.”

It’s a remarkable accomplishment for someone who first fell in love with film as a suburban movie theater employee.

For 10 years Mike Suglio worked part-time at Atlas Cinemas in Mentor. He watched a lot of movies during that decade, all the while reporting to General Manager Cyprian Piroch.

So when Piroch asked Suglio to accompany him on a trip to the Philippines, where the duo could film a documentary about the developing nation and its people, the decision was simple.

Suglio graduated with his MBA, and agreed to accompany Piroch on this once-in-a-lifetime venture. He quit his job at CWRU and boarded a flight for Manila, the capital city of the Philippines, at the end of September.

According to Suglio, he wasn’t making a sacrifice. He was making the right decision.

“The thing you immediately notice is hospitality,” he says, as he describes his first encounter with a Filipino. The taxicab driver considered himself a national ambassador who was responsible for providing Westerners with their first positive impression of the country.

“We were in the most densely populated city in the world, which I learned from trivia night at the Jolly Scholar,” he says as a familiar smile stretches across his face.

Suglio and Piroch soon left the touristy capital of the Philippines and proceeded to the more rural island of Negros Oriental, where they met Clarita, a local female shaman. They filmed the 94-year-old native, who sat in the corner of a local market with little bottles, herbs and crucifixes. According to Suglio, she claimed she could fix any ailments better than a Western doctor.

The pair also reunited with a Filipino massage worker, who Piroch had promised to return to film many years earlier. “He was blind by age 18,” Suglio says of the national. “His family suggested he get into massage therapy because there aren’t that many opportunities there for people who are visually impaired.” The encounter especially moved Suglio, who had worked with visually impaired students throughout his employment at the university.

But the paramount moment of Suglio’s trip didn’t originate above from above the ground; it came from beneath the earth. Passionate about World War II artifacts, Suglio yearned to experience some historic pieces while in the Philippines. But he did not expect to discover an impromptu museum.

The two filmmakers consulted with locals and discovered an amateur, yet robust, display compiled by Filipino Felix Constantino. The old man’s uncle died in a Japanese POW camp during the war, which spurred Constantino to begin searching for pieces of history at the age of 5.

With only a shovel to assist him, the man dug deep into the soil and collected numerous artifacts, ranging from Japanese Kamikaze swords to a MacArthur Jeep. Ultimately he filled a modest garage from floor to ceiling with exhibit-worthy relics. He only stopped digging when his aging body could no longer endure it. Along the way he has unearthed the bodies of 28 Japanese soldiers. He knows where at least seven more are buried.

“That became our main documentary,” Suglio says as his eyes glisten with vindication. “I’m starting to edit it right now.”

Back in Cleveland, Suglio freelances and works odd jobs to make ends meet. By night he patrons the city’s best taverns and breweries, where attentive audiences on both sides of the bar pause to hear his story.

Suglio aspires to film tomorrow’s best movies from the studios of Los Angeles, Cali. He doesn’t know how long it will take, and he frankly doesn’t care. After all, if he’s learned one thing along the way, it’s how to approach life one patient—yet measured—step at a time.

Like a newly cut film waiting to be viewed.

Like a freshly poured beer waiting to be sipped.

The executive editor of The Observer, Tyler Hoffman has helped tell Case Western Reserve’s story since 2010. To reach him, call 216.368.2914, drop him a line at observer@case.edu or follow him on Twitter @tylerehoffman.